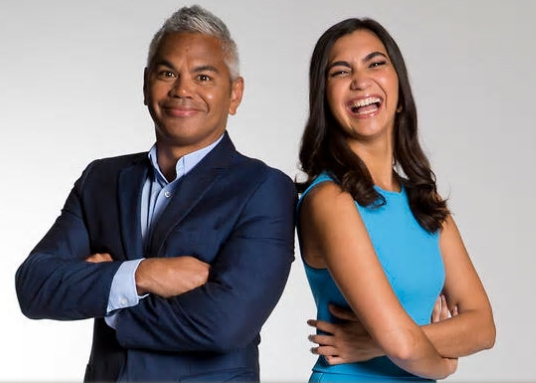 NITV’s news and current affairs program, The Point returns for 2018

In 2018, NITV’s flagship news and current affairs program The Point will return to screens, with new hosts and a special weekly one-hour issues-based panel show.

Now in its fourth season, NITV is proud to announce that social commentator John Paul “JP” Janke and dynamic investigative journalist Rachael Hocking will take the reins of The Point this year.

Kicking off from Thursday, 22 March, each week new hosts Rachael and JP will be joined by key commentators and high-profile talent to wrestle with the stories and issues impacting First Australians.

With a network of correspondents and contributors across the country, The Point will continue to deliver agenda setting original journalism, special investigations and the latest news. A line up of regular guests will explore consumer affairs, social media, the arts, science and technology as well as music, comedy and celebrity interviews.

“As NITV welcomes a new season of The Point in 2018, we have again evolved and responded to our viewers. The result is a new punchy weekly format, led by our wonderful co-hosts John Paul Janke and Rachael Hocking, covering hugely important issues to our community and in-depth conversations with fascinating, well-known figures, all encapsulated into an hour-long episode. This season of The Point is not to be missed.” The Point awarded in multicultural awards

The Point co-host Rachael Hocking is departing NITV in April.

The Point will air at 7.30pm Tuesdays on NITV and now be followed by an 11.00pm encore on SBS.

NITV is thrilled to announce that this year The Point will be hosted by Shahni Wellington and John-Paul Janke . Shahni Wellington is a proud Jerrinja woman who first joined NITV as a political correspondent in 2019. In 2020, Shahni hosted The Point’s Black Lives Matter special, and most recently co-hosted Australia’s first ever Indigenous breakfast television program – Big Mob Brekky .

The Point covers stories that matter most to communities across Australia and tackles issues impacting First Nations Australians today.

SBS Director of News and Current Affairs, Mandi Wicks, said: “2021 is shaping up to be another big year for news and SBS’s current affairs line up will help Australians understand the issues facing us all. New Insight host Kumi Taguchi brings enormous warmth and experience and we are looking forward to sharing many surprising and untold stories this year. We’re also delighted to welcome the world-class reporting of The Point to Tuesday nights.”

SBS Head of Indigenous News and Current Affairs, Rhanna Collins said: “The NITV team are beyond excited to launch The Point as a part of the SBS Tuesday night current affairs line up after its premiere on NITV. We want to thank Rachael Hocking for her passion in driving the program to where it is today and for telling so many stories from our communities with authenticity and grace over the past six years. We welcome Shahni Wellington as co-host alongside John Paul Janke. Shahni is an incredible journalist and storyteller and a credit to NITV and the show!”

Counting down now to the start of the 2021 Season of @NITV's flagship current affairs program - The Point. Excited to be joined by new co-host @Shahni_W. A new night and timeslot. The Point will air at 7.30pm Tuesdays on @NITV and now be followed by an 11.00pm encore on @SBS. https://t.co/F7beE7lWsg