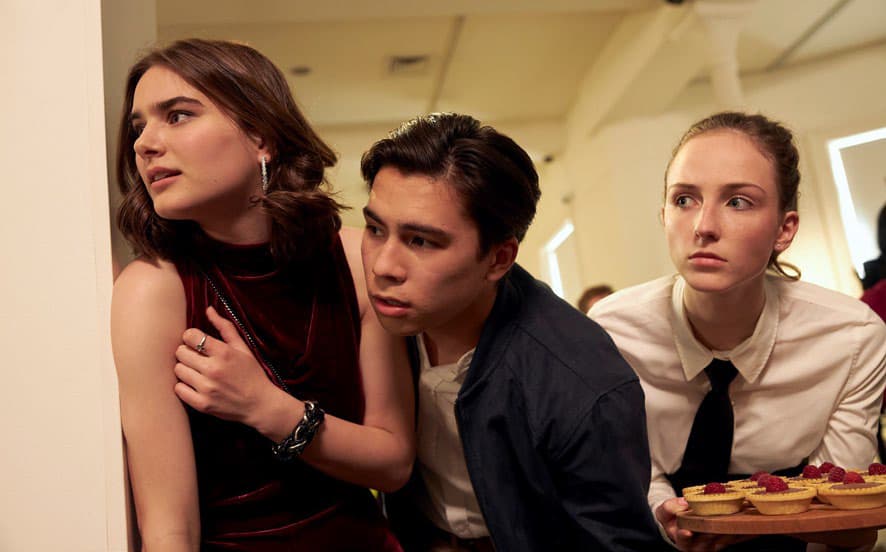 Cat is like any other teenager, with one difference: her mother is the Prime Minister of Australia. Along with her new friends, Cat navigates life in the spotlight, while tracking down a hidden threat to her mum.

Catalina Parkes Pérez (CASSANDRA HELMOT) is like any other teenager who wants to have her voice heard. There’s just one complication: her mother, Isabel, (CLAIRE FEARON) is the Prime Minister of Australia.

Cat has always been someone who stands up for what she believes in, but her mum’s new job is putting a serious dent in her freedom to be who she wants to be. How can Cat make her voice heard when there’s so much pressure to support her mum and be “the perfect daughter”?

As if all that weren’t enough, a series of stunts have started playing out across the
national Capital, clearly aimed at sabotaging the Prime Minister. When blame falls on Cat’s activist heroes, Action Uprising, Cat decides to dig into unmasking an alternative group, the Agitators, who are really behind the stunts. Luckily for Cat, she has two new friends, Sadie (NATALIE ENGLISH) and Ollie (JAGAYAP), to help her.
Production credits: A Fremantle Australia production for the ABC.

The premiere has been pushed back to this Saturday (January 1) at 5.30pm.

Green Guide (The Age) and Guide (SMH) have an interview with Cassandra Helmot. 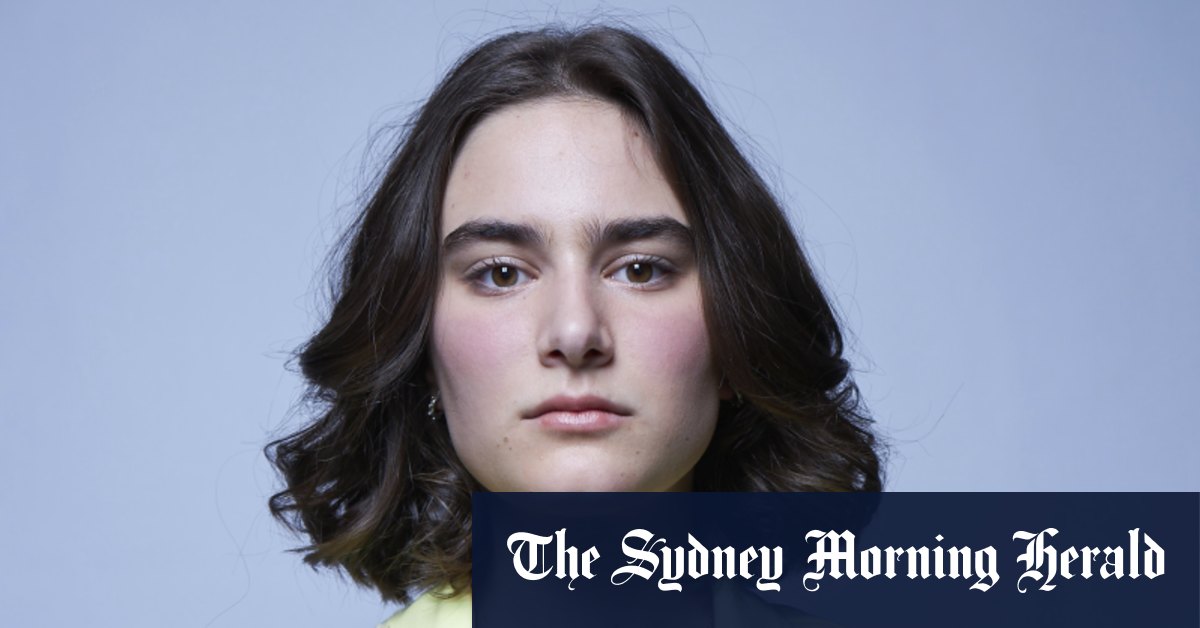 Combining secondary school and acting this year, Helmot found she had much in common with the character she plays.

The premiere has been pushed back to this Saturday (January 1) at 5.30pm.

Strange that the ABC is choosing these odd dates to debut their first run series. Bluey, Born to Spy and now The PM’s Daughter all running outside the peak viewing periods.

Just watched the first episode. This series is really well made and it’s great how it doesn’t talk down to younger viewers. It would easily sit alongside other quality Australian dramas we see in prime time. Reminds me of how good Dance Academy was, when it was made.

The series will return for a second season with production funding from Screen Australia announced today.

A 10-part second series of the popular live action children’s drama for ABC. This series follows Cat who has found her groove as the Prime Minister’s daughter, but her school and home life are upended when she discovers an unexpected crush, begins a feverishly competitive internship, and outs a shocking parental secret – all leading to the unmasking of a brand new conspiracy. Series 2 sees the return of writers Lou Sanz (6 Festivals), Hannah Samuel (Rock Island Mysteries), Gemma Bird Matheson (The Power of the Dream) and Craig Irvin (Itch), and co-executive producer Kieran Hoyle. They are joined by writers Jess Paine (The Heights), Alexandra Cullen (The Heights) and Nikki Tran (Girl, Interpreted), series producer Tim Powell (Rock Island Mysteries), co-producer Yingna Lu (Love Bug) and executive producer Warren Clarke (Mustangs FC). This project is financed with support from the ABC and the Australian Children’s Television Foundation.

I’m surprised they’re doing a second season. It started off well but I felt like it went round in circles with the storyline and was became way too preachy. The main character became very annoying by the middle of the first sesson. 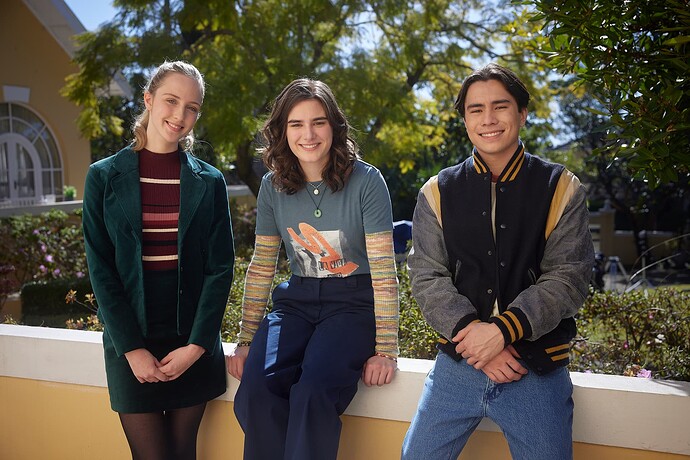 The ABC and Screen Australia are pleased to announce cameras have rolled on the second series of the critically acclaimed political comedy-drama The PM’s Daughter produced by Fremantle Australia.

Just when Cat Parkes Pérez has finally settled into life in The Lodge, a brand new conspiracy sends her on a desperate search for the truth. Between a federal election campaign and a highly competitive tech internship, there’s no shortage of distractions … and that’s all before her mother’s love life starts making headlines. Cat’s journalism aspirations are about to be put to the test as she digs to uncover her very first story, all while balancing the unpredictable complications that come with being the PM’s daughter.

With best friends Sadie and Ollie by her side, Cat’s about to discover that the truth can be far more complicated than she ever imagined.

Mary-Ellen Mullane, Managing Editor ABC Children’s , said, “We are very excited to be in production on a second PM’s Daughter series with Cat now firmly ensconced in the Lodge with her PM Mum, Isabel, surrounded by her best mates Sadie, Ollie, and newcomer Alex. There’s loads more political intrigue, super surprising teen crushes and yes, the constant challenges of teen life lived firmly and squarely in the public eye. We look forward to sharing the new series with you soon.”

Warren Clarke, Executive Producer, Fremantle, said: “After the phenomenal success of the first season, we’re delighted to continue our collaboration with the ABC for a second term of The PM’s Daughter. We are once again thrilled to have a fantastic creative team who are taking the series to new heights with even more of the fun and thrills that our audience have come to love.”

Grainne Brunsdon, Screen Australia’s Head of Content , said, “We know Cat’s adventures proved popular with young viewers and we’re delighted to support a second season of this fresh series. The talented creative team have done a brilliant job of crafting a smart drama that explores contemporary issues and real world politics in a fun and engaging way.”

The PM’s Daughter is filming on location throughout Sydney and will premiere on ABC ME next year.

I’m surprised it got a second season. It started off really well but by the middle of the first season it became quite tedious.

Cat’s finally found her groove as the PM’s daughter, but her school and home life are upended when she discovers an unexpected crush, begins a feverishly competitive internship, and outs a shocking parental secret – all leading to the unmasking of a brand new conspiracy.

Series 2 will see Cat and her friends grappling with the idea of the truth. From knowing your parents, to knowing your heart, everything is way more complicated than the adults like to admit… especially when you’re growing up in the Lodge. Cat has always been determined to speak truth to power and her pursuit of a future in journalism will take this to the next level. Set against the backdrop of an election, whether it’s personal or political, Cat’s about to discover the truth can hurt just as much as it helps.