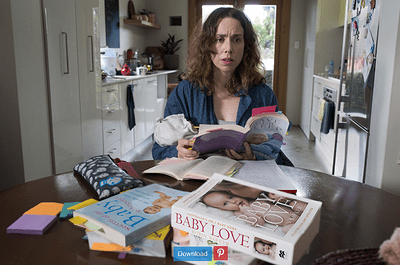 Produced by Giant Dwarf and co-written by Sarah Scheller and Alison Bell, who also stars, The Letdown was one of six Comedy Showroom pilots which aired last year on ABC TV as part of a joint initiative with Screen Australia.

With the pilot episode receiving the 2016 AACTA Award for Best Screenplay in Television, the series continues with the developing friendships and lives of a mother’s group thrown together through the circumstance of timing. Audrey (Alison Bell) navigates the steep learning curve of motherhood as she deals with sleeplessness, shifting relationship dynamics, her issues with her own mother and her husband’s career ambitions. They say it takes a tribe to raise a child, but these days obliging tribes are hard to come by – so perhaps this unlikely group of women (and one fella) is as good as it gets.

With a stellar cast including Alison Bell, Duncan Fellows, Sacha Horler, Leon Ford, Lucy Durack, Celeste Barber, Leah Vandenberg, Xana Tang, Sarah Peirse and Noni Hazelhurst, The Letdown proves that being a parent can be both extreme and hilarious.

Creators and writers Sarah Scheller and Alison Bell, said: “We are thrilled to be working with the ABC and Netflix on a full series of The Letdown. We’ve learned that making a TV show is actually not unlike motherhood… floods of tears, bursts of love and unhinged hormonal meltdowns - all in the name of comedy.”

ABC Head of Comedy Rick Kalowski said: “From the moment The Letdown’s pilot went out as part of our Comedy Showroom, it was clear the show had struck a chord with its brilliant blend of laughs and heartbreak – the very stuff early parenthood is made of. It is an absolute thrill to partner with Netflix on an ABC Comedy for the first time, and to bring this series to the rest of the world.”

Mike Cowap, Investment Manager Multiplatform at Screen Australia said: “Sarah Scheller and Alison Bell firmly established themselves as bold new voices with this darkly funny concept created as a pilot for our joint ABC initiative Comedy Showroom, demonstrating the appetite for a full series. We’re thrilled that this uniquely Australian story will be seen both at home and abroad through Netflix.”

Sophia Zachariou, Director, Sector Investment at Create NSW, said: “Encouraging female voices in comedy is a key focus for Create NSW and we are proud to be supporting this important next step in the careers of Sarah and Alison, whose original and darkly hilarious comic sensibility was so brilliantly showcased in The Letdown. I can’t wait to see what they will unleash across an entire series!” ABC comedies will screen earlier as of next week.

With a newborn at home currently, wife and I are loving this show.

ABC, Screen Australia and Create NSW are thrilled to announce that filming starts in Sydney next week on the highly anticipated season two of the AACTA Award-winning comedy The Letdown.

The Letdown season two will air on ABC TV and iview, and internationally on Netflix, in 2019. 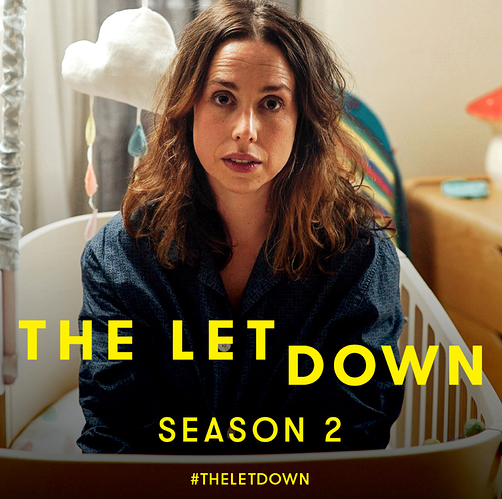 Produced by Julian Morrow ( The Checkout, The Chaser’s War on Everything ) and Linda Micsko ( Maximum Choppage, Laid ) for Giant Dwarf, creators/writers Sarah Scheller and Alison Bell once again mine the myriad humorous highs and heartbreaking lows faced by new mothers.

Over six new episodes, we continue to follow the story of Audrey (co-creator Alison Bell, in her AACTA Award-nominated role) and the local Mothers’ Group she thought she didn’t need. The new season starts with all the babies turning one, where life with child has become the new norm and Audrey finally feels she’s mastering motherhood and life…but is she?

Following on from the acclaimed 2016 Comedy Showroom series pilot, which earned Scheller and Bell the AACTA Award for Best Screenplay in Television, season one of The Letdown was a major critical and audience success on ABC (especially among 25-34 and 35-49 year old viewers), and outside Australia on Netflix, leading the show to earn international plaudits including a New York Times’ Arts Section cover story, and praise from Vanity Fair as a “clear-eyed take on parenthood, told hilariously”.

Co-creators and writers Sarah Scheller and Alison Bell said, “We are thrilled to be back in production with the ABC and Netflix on another season of The Letdown because it turns out we have many more stories to tell… For season two, we focus on the big and small decisions we make once we become parents, and once again we draw on real stories and universal themes to shine a fresh light on motherhood in all its wonder."

ABC Head of Comedy Rick Kalowski said, “It’s an incredibly proud moment to see cameras roll on The Letdown season two, and I thank Sarah, Alison, producers Giant Dwarf, and our partners at Netflix, Screen Australia and Create NSW. The Letdown is that rarest thing in television: a show fans have taken to their hearts as their own, for telling their stories of new parenthood as they had never seen told before with such honesty or wit. Season two will delight and move them every bit as much as season one.”

Head of Content at Screen Australia, Sally Caplan said, “We’re excited to be supporting the second series of this charming and award-winning comedy. The story of new parents navigating the highs and lows of parenthood is universally relatable and with the support of the ABC and Netflix, combined with impressive scripts and a strong creative team I’m sure this series will resonate with audiences here and around the world.”

Create NSW Acting Director Screen Investment, Engagement and Attraction Sally Regan said, “We are thrilled to support Giant Dwarf in season two of The Letdown , which audiences enjoyed last year on the ABC. Alison and Sarah have opened the door to the excruciatingly funny moments of motherhood, and the next season is sure to provide great entertainment.”

Joining Trent O’Donnell ( The Good Place , No Activity, New Girl ) as directors this season are Amanda Brotchie ( Picnic at Hanging Rock ) and Scheller and Bell, making their directorial debut.

From Wednesday 29 May at 9pm

Internationally acclaimed, AACTA award winning comedy series The Letdown returns to mine the hilarious highs and lows faced by new parents, starting on ABC and ABC iview from Wednesday 29 May at 9pm, with the complete series available to binge on iview following the initial broadcast.

Following a first season hailed by The Sydney Morning Herald as “ the funniest, most truthful thing on TV right now ”, and that drew raves from Vanity Fair and The New York Times, The Letdown season two picks up where we left off with Audrey (co-creator/writer Alison Bell in her twice AACTA Award nominated role) and the local parent’s group she thought she didn’t need. Their babies are now turning one and as they learn to walk, so too do their parents (metaphorically). At first, it’s all baby-steps, but ultimately, everyone will find their feet, with a new normal that brings more change, more chaos and more comedy.

Season two of The Letdown hails from creators/writers/producers Sarah Scheller and Alison Bell and is produced by Julian Morrow ( The Chaser , The Checkout ) and Linda Micsko ( Maximum Choppage ) for Giant Dwarf. Directing this series are Trent O’Donnell ( The Good Place (NBC), No Activity (CBS All Access), New Girl (Fox), Amanda Brotchie ( Picnic at Hanging Rock , A Place to Call Home ), as well as Scheller and Bell, making their directorial debuts. 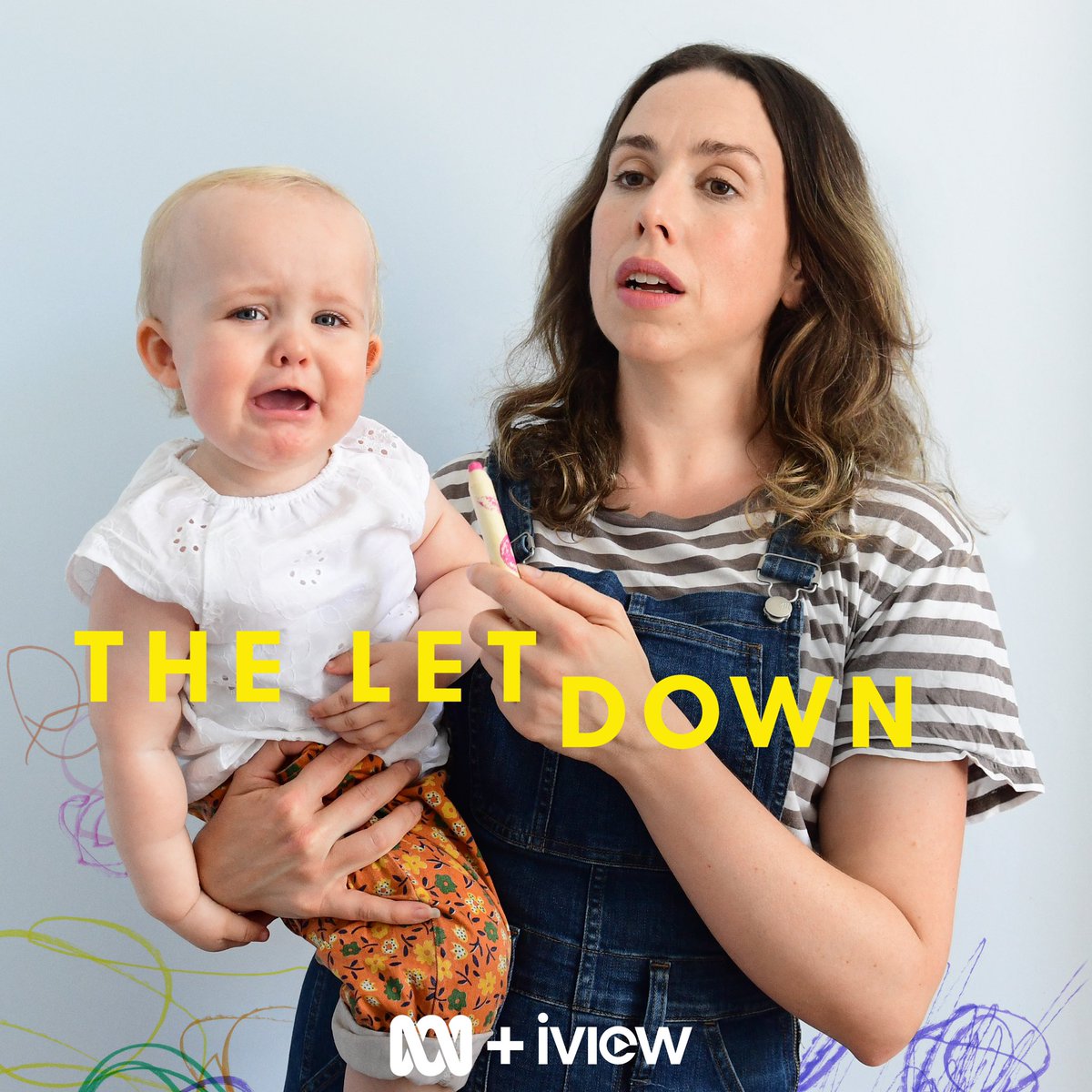 The Letdown won best comedy at the AACTAs and Alison Bell won best performance in a TV comedy.

The AACTA Award for Best Performance in a Television Comedy goes to @Alison_M_Bell for @TheLetdownTV . #AACTAs https://t.co/lVTpDi8II5

Just been catching up on the second season this week and am really enjoying it more than the first. The writing gets better and the character development is brilliant with a lot more clever comedy this season.

I hope they do a third season and all the actors come back.