The House with Annabel Crabb

###The House with Annabel Crabb

From Tuesday 8 August at 8pm 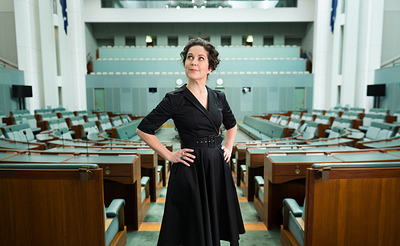 From the makers of Kitchen Cabinet comes a ground-breaking new documentary series filmed exclusively inside the heart of Australian democracy. The House with Annabel Crabb was shot over a ten-month period with unprecedented access granted by Parliament House authorities to the extensive parts of the building where cameras – and members of the public – are ordinarily not permitted.

“Parliament House is a unique building; it’s like a self-contained city,” says host Annabel Crabb. “But so much of it is hidden from public view. Our aim was to bring the Australian people – who own the place – inside it for a better, closer look at what goes on in there.”

The House with Annabel Crabb reveals the late-night drama behind some well-known pieces of legislation and accompanies crucial decision-makers behind the scenes for the often messy process of making Australian laws.

The series features stunning new aerial and internal drone footage of Parliament House, filmed with exclusive permission from the building’s administrators. Director Stamatia Maroupas captures the architecture of the building – and the movements of its occupants – at all hours of the day and night.

ABC cameras visit the Prime Minister’s office and discover the secrets of the Cabinet Room; capture the behind-the-scenes tension of a diplomatic visit; invade the Members-only dining room, and witness first-hand the turbulence as protesters penetrate the House of Representatives.

In keeping with the style of Kitchen Cabinet, there is a rich vein of comedy as Crabb explores some of the more ornate parliamentary traditions, and unearths some odd personal habits among the politicians best-known to Australian voters. Why do they sometimes speak in the chamber while holding a piece of paper over their heads? Which politician has a foldaway wardrobe and kitchen in her office? Which minister has a life-size talking Darth Vader figure? Which one keeps a 300-piece set of crockery behind his desk, and why would a person even do that?

But the series also takes viewers to some strange and wonderful places inside the building: the vast underground network of tunnels and workshops that whirr away secretly below the feet of the legislators, for instance. Parliament House has a subterranean world which is largely unfamiliar to most of those who inhabit its upstairs suites. Meet Sandy McInerney, queen of the underworld, who controls the loading dock – the single entrance through which all the food, goods and supplies enter Parliament House, and out of which every item of waste leaves. McInerney - an ex-Army driver and logistician - also has an extraordinary personal journey of discovery, triggered by a Parliamentary speech.

Meet the Parliamentary staff who have been there longer than any of its politicians; chamber attendant Luch Jonceski, who has worked in the building for 29 years, and before that, worked as a labourer on the building site. Or Maria Ljubic, the building’s head cleaner, who gave the red carpet a last-minute vacuuming at the building’s opening in 1988 and was briefly mistaken for the Queen.

“All we see of Parliament House usually is an hour of shouting a day in Question Time,” says Crabb. “But the people who work here are truly extraordinary, and the story of Australian democracy is much deeper, richer and funnier than you would expect. It’s always felt like an honour to work in this building. To bring a broader audience inside, though, was a historic opportunity.”