The six-part documentary will shine a light on social and economic disadvantage in Australia through a raw and compassionate account of individual and community stories of challenge, triumph and adversity.

Struggle Street series one gave a voice to Australians doing it tough, sparking a national conversation about disadvantage caused by a range of circumstances and factors, including poverty, unemployment, drug abuse, violence and physical and mental illness.

Series two will continue this crucial national conversation, through personal stories that touch on the lives of Australians from diverse backgrounds struggling against the odds.

SBS Television and Online Content Director, Marshall Heald, said: “At the heart of SBS is a commitment to contributing to a cohesive society. Struggle Street will seek to raise awareness and deepen our understanding of those of us in the community facing social and economic hardship through an honest reflection of what it’s like to be doing it tough in Australia today.”

SBS Chief Content Officer, Helen Kellie, said: “There are 2.5 million people in Australia living below the poverty line. Some research points to the situation getting worse not better and this is a barrier to social cohesion. But the statistics don’t allow us to connect with the real stories, in a way that Struggle Street does, to raise awareness about hardship.”

Struggle Street series two will be produced by Keo Films, producers of series one, with funding support from Screen Australia and Film Victoria.

Keo Films Director of Programs, David Galloway, said: “Struggle Street is a candid and powerful account of the lives of people struggling in Australia today. We anticipate stories of resilience, community support and family love in what will be compelling and insightful storytelling that doesn’t shy away from the realities of hardship faced by millions of people across the country.”

Screen Australia Senior Manager of Documentary, Liz Stevens, said: “The first series of Struggle Street provoked a unique and important discussion about the extent and effects of poverty in Australia. Screen Australia hopes the second series of Struggle Street will raise further awareness of these complex problems and the networks and services that provide essential and sometimes lifesaving support to their communities."

Film Victoria CEO, Jenni Tosi said: “Social and financial inequality are issues that affect the wellbeing of many Australians. Supporting Struggle Street and SBS in their aims to increase awareness of these challenges has the potential to promote tolerance, empathy and a call to positive action.”

Struggle Street series two will be filmed in Queensland and Victoria exploring, through personal stories, challenges such as industry downturn and transition, unemployment and other issues of social and economic hardship which reflect the challenges of Australians across the whole country. The series will air in late 2017.

Seems like a long time between season 1, recommission and season 2

Controversial SBS documentary Struggle Street has been refused permits to film a series in Inala, with Brisbane Lord Mayor Graham Quirk blasting the program for destroying the reputation of Mount Druitt in Sydney.

Cr Quirk said the council was powerless to prevent producers going ahead with the production on residents’ private properties.

“If people invite a production crew on to their private property, then that is a matter for them,” he said.

So many potential headlines being missed!!

MARIBYRNONG Council has turned down a request for controversial series Struggle Street to be filmed in Braybrook.

Chief executive Stephen Wall said while the producers may claim that they “shine a light on social and economic disadvantage”, the council doesn’t see it in the same way.

Filming permits have already been knocked back by Hume and Brimbank councils to shoot parts of the series in Broadmeadows and Sunshine.

destroying the reputation of Mount Druitt in Sydney.

lol. What reputation? Certainly nothing good.

No council is going to approve unless SBS stumps up the cash, which they don’t have. No need to film in council areas anyway.

The show has begun filming in Sunshine but local resident Nicola McKay said residents were “frustrated” but not powerless to make their opposition known. She said the show was exploitative and preyed on vulnerable individuals for entertainment.
“The objection to some SBS producer choosing Sunshine to film their second series is that for the community it’s not good, it’s not good for us,” she said.
“I think there are lots of ways to make it unappealing for SBS to come and film.”

Are these residents dole bludgers or drug dealers? They will probably be incorporated into the story.

[quote]The producers of controversial SBS documentary series Struggle Street have been fined for filming on council land without a permit in Brisbane’s west.

Brisbane City Council issued the $609 penalty after two crew members were caught shooting on a footpath at Skylark Street, Inala, on Friday afternoon, following a complaint.[/quote]

In the two years since SBS aired Struggle Street, an observational documentary series highlighting some of the issues facing Australia’s most disadvantaged communities, the country remains at crisis point with unemployment, homelessness, rising drug use, mental illness, soaring rents and declining industries among the complex issues that affect people across Australia today.

A report by the Australian Council of Social Service (ACOSS) and the UNSW Social Policy Research Centre revealed that a staggering 2.99 million Australians – 13.3% of the population – live below the poverty lineii.

Marshall Heald, SBS Television and Online Content Director, said, “The new series of Struggle Street offers a raw and unflinching portrayal of struggle and hardship and makes for difficult viewing, but these are the stories we need to hear most. The purpose of the program is to raise awareness about social and economic hardship in Australia today and deepen our understanding of the challenges facing us as a community.”

Filmed in 2016 over six months in Queensland and Victoria, the new series of Struggle Street will continue an important national discussion about the impacts of social and economic disadvantage in Australia today. Told through personal stories that touch on the lives of a diverse group of Australians struggling against the odds, the documentary is an honest reflection of what it’s like to be doing it tough in Australia.

Over two weeks, the series will delve deeper into some of the key social issues that are affecting millions of Australians. It explores the challenges facing nearly one million working Australians who live on the poverty lineiii; the damaging impact of the decline in manufacturing industries; homelessness, particularly among women aged 55+iv, as rent and house prices continue to rise; the financial difficulties facing Australia’s disability carers; the ramifications of illicit drug use and, the daily challenges facing those who live with mental and physical illness.

The first series of Struggle Street ignited national debate around these issues, helping Australians to better understand the realities of social and economic hardship. Series two will continue this crucial national conversation.

In order to raise further awareness of the help available to Australians affected by the issues raised in the series, SBS is working with a number of charities and organisations who will provide further context, information and resources, as well as contributing to on-air discussion shows. The partners include the Social Policy Research Centre, the National Drug and Alcohol Research Centre and Beyond Blue.

Associate Professor Frances Kay-Lambkin from the National Drug and Alcohol Research Centre said, “Struggle Street series two presents a sobering view of life for many Australians living with mental illness, alcohol or other drug use, and additional challenges…not just those who appear in the documentary. I hope Australia views the people in these stories with compassion, and a realisation that they are doing the best they can with what life has presented them with. I also hope they appreciate the incredible resiliency these people have, and are moved by their stories. I commend SBS for their work on this important documentary.”

Some of the key issues featured in the series include:

Unemployment
Despite an increase in the number of Australians working full time, the ripple effect of the country’s car manufacturers closing last year is expected to culminate in the loss of 200,000 jobs alonev. Struggle and hardship is not just limited to those without work; nearly a million working Australians are also living on the poverty linevi.

Homelessness and housing issues
Homelessness is one of the most potent examples of disadvantage and social exclusion in Australia today and affects more than 105,000 peoplevii.
Women aged over 55 are the fastest growing demographicviii and nearly half of those who leave prison in Australia are homeless within the first six monthsix.

Substance abuse
According to the Australian Institute of Health and Welfare (AIHW), the number of people illicitly using drugs has increased from 2.3 million to 3.1 million in recent yearsx and the number of regular Ice users has tripled to 250,000xi.

Mental illness
Mental illness comprises a wide range of disorders and its influence is far-reaching for society as a whole. Issues associated with conditions such as depression, anxiety and stress include poverty, unemployment and homelessness.
More than four million Australians will experience a mental disorder at some time in their life of which nearly a third will have a drug or alcohol problemxii.

Disability
In 2015 there were 2.7 million unpaid carers in Australiaxiii. Around 856,000 are primary carers, with an average age of 55xiv. A quarter of Australian carers on benefits live below the poverty linexv.

In addition to the main program, SBS will also air support content across the network including an NITV The Point special about Indigenous housing issues on Wednesday 29 November, a live discussion show on SBS on 7 December and The Feed special on SBS Viceland on Friday 8 December.

Season 3, focusing on rural areas, premieres on Wednesday, October 9. It was filmed entirely in the Riverina. 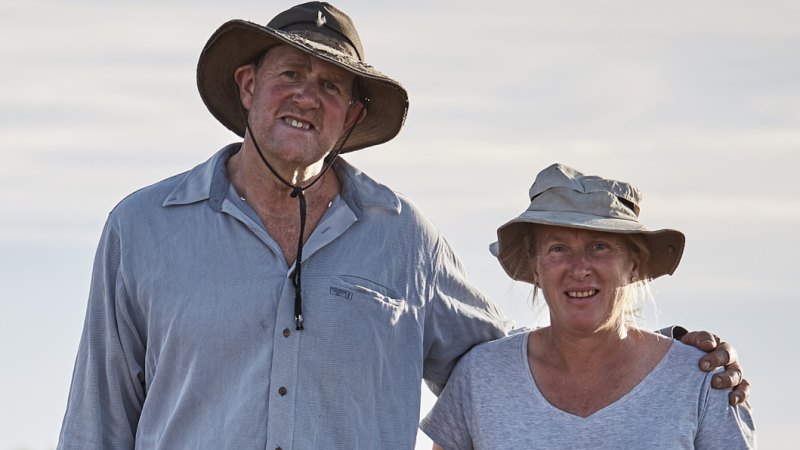 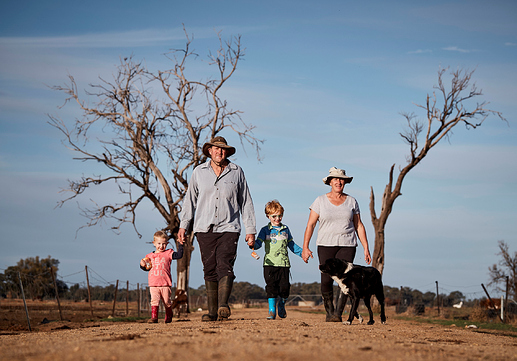 The first two seasons of Struggle Street gave a voice to Australians doing it tough and sparked a national conversation on a range of issues facing some of Australia’s most disadvantaged communities.

In the four years since SBS first aired Struggle Street , the country remains at crisis point. Now, more than three million Australians (13.2%) live below the poverty line*. Poverty and hardship is a problem that is getting worse, and for more than 30%** of the population living outside Australia’s capital cities, disadvantage is more prevalent***.

The four-part observational documentarywill feature stories of those in the Riverina region of New South Wales - from the regional centre of Wagga Wagga to smaller country towns.The stories explored are representative of the issues affecting people throughout Australia, including the impact of the current drought, unemployment, access to healthcare, homelessness, the effects of drugs and alcohol, the challenges facing those with mental ill-health and physical disabilities and the decline of small-town rural Australia.

Through sharing stories of adversity and resilience, the new season will help to provide all Australians with a deeper understanding of the complex national issues affecting individuals, families and communities living on the land and in the towns of rural and regional Australia.

Here are the farmers featuring in season 3. 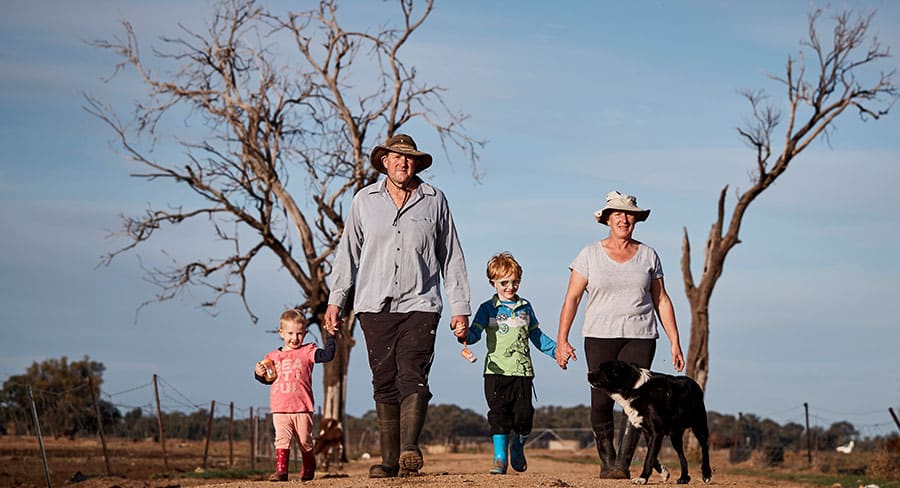 The Struggle Street final is scheduled for Wed 30 October at 8:30pm.

09:30 The Feed: Struggle Street on Vicleand
Has life improved for those living on Struggle Street, six months since filming stopped? Marc Fennell travels to the NSW Riverina to find out how people in the 2019 instalment feel about their future.

Plus another repeat on SBS Thursday 1 Nov at 11:15pm