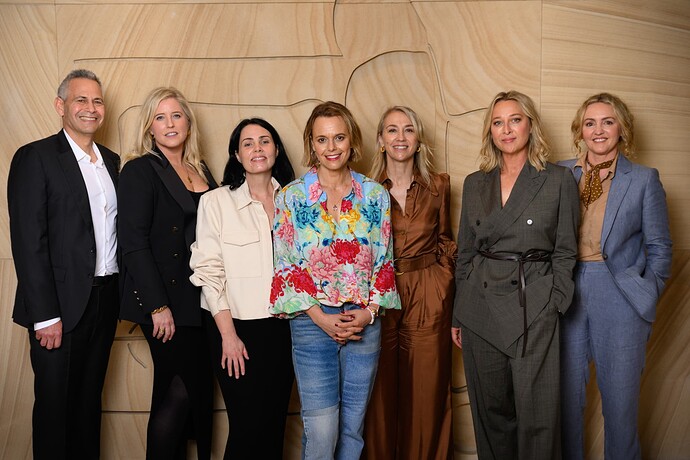 FROM MADE UP STORIES AND FIFTH SEASON, STARRING ASHER KEDDIE

BINGE today announced STRIFE, a new Australian series from award-winning production company Made Up Stories, with producers Bruna Papandrea, Jodi Matterson and Steve Hutensky alongside Asher Keddie, Sarah Scheller and Mia Freedman, and in partnership with global studio FIFTH SEASON, commissioned by the FOXTEL Group for BINGE with production set for 2023.

The comedic drama series tells the story of a modern, imperfect woman and publisher named Evelyn Jones, played by acclaimed Australian actress Asher Keddie, and her journey from lounge room blogger to becoming a force in women’s media.

Set in the dynamic and ever-changing world of publishing, digital media and its origins, the series is inspired by Mia Freedman’s memoir, ‘Work, Strife, Balance’*, and is written by Australian screenwriter Sarah Scheller (The Letdown).

Made Up Stories Founder and CEO, Bruna Papandrea**,** said: “I have been privileged to bring many incredible stories to the screen, from bases around the world but Australia is my home, and I am passionate about telling our stories - Australian stories - and I am so thrilled to be working with the Foxtel Group on this new original for BINGE.

“We have assembled an incredible team to bring this project to life, including the amazing Asher Keddie, who is both our series’ star and producing partner, the brilliant Sarah Scheller who leads the writer’s room and will be our showrunner and the awesome Mia Freedman whose compelling memoir and trail-blazing career is the inspiration for this series.”

BINGE Executive Director, Alison Hurbert-Burns, said: “We are thrilled to be partnering with such a formidable force in Bruna Papandrea and Made Up Stories - a production company that champions

women on and off screen throughout the world, the incredible Asher Keddie, and of course Mia Freedman, who has been a strong inspiration for this series.

“STRIFE is a story full of heart, and plenty of humour, and we can’t wait to bring it to BINGE viewers.”

FIFTH SEASON President, TV Distribution, Prentiss Fraser, said: “We are delighted to join our partners at Made Up Stories on our first drama series commission with the ideal collaborators, the Foxtel Group. STRIFE is a timely and relatable series inspired by Mia Freedman’s powerful memoir and showcases Australia’s best creative talents in front of and behind the camera.”

STRIFE is commissioned by the Foxtel Group for BINGE and will also be available on Foxtel. Production will begin in Sydney in early 2023.

About MADE UP STORIES

Made Up Stories is a development and production company that amplifies distinctive voices to tell unforgettable stories about the diversity of human experience, driven primarily by multifaceted females on and off-screen. Made Up Stories was founded in 2017, and is led by Bruna Papandrea, the award-winning producer of the critically acclaimed HBO series BIG LITTLE LIES (eight Emmy Awards and four Golden Globe Awards). On the television side, Made Up Stories premiered five series in 2022, including Netflix’s hit shows PIECES OF HER starring Toni Collette and ANATOMY OF A SCANDAL starring Sienna Miller and Michelle Dockery; the anthology ROAR for Apple TV+ starring Nicole Kidman, Cynthia Erivo, Merritt Wever, and Alison Brie; the genre-bending romantic comedy WOLF LIKE ME starring Isla Fisher and Josh Gad for Peacock and Stan that is currently in filming its second season; and the Spectrum Originals women’s basketball drama LONG SLOW EXHALE, starring Rose Rollins. They recently wrapped principal photography on the Amazon Prime Video series THE LOST FLOWERS OF ALICE HART, adapted by Sarah Lambert from Holly Ringland’s debut novel, and starring Sigourney Weaver set to release in 2023. They just executive produced their first unscripted series, UNDRESSED, releasing on Paramount+ in Australia in October. Made Up Stories also executive produced THE UNDOING, starring Nicole Kidman and Hugh Grant, which was HBO’s most watched series of 2020, NINE PERFECT STRANGERS, based on best-selling author Liane Moriarty’s book, starring Nicole Kidman and Melissa McCarthy, that

premiered to great acclaim in August 2021 and immediately became Hulu’s most watched original series, ever, as well as, the hit Amazon Prime Video series TELL ME YOUR SECRETS created by Harriet Warner and starring Lily Rabe.

Made Up Stories most recently produced the film adaptation of Netflix’s LUCKIEST GIRL ALIVE, based on the novel by Jessica Knoll, starring Mila Kunis, and directed by Mike Barker, that premiered on October 7, 2022, and was the #1 movie globally on Netflix. Previously they produced the film adaptation of the inspiring international bestseller, PENGUIN BLOOM, directed by Glendyn Ivin and starring Naomi Watts, Andrew Lincoln and Jacki Weaver, that was released by Netflix, and THE DRY, based on the Jane Harper novel, from director Robert Connolly and starring Eric Bana, released by IFC. Made Up Stories is currently in production on the film adaptation of Jane Harper’s FORCE OF NATURE, a follow-up to THE DRY, with Eric Bana reprising his role and Robert Connolly directing.

FIFTH SEASON (formerly Endeavor Content) is a global leader in the creation, production, and distribution of feature films and premium television series. Known for producing and distributing award-winning content that engages audiences and moves culture, the studio’s film titles include the multi-Oscar-nominated THE LOST DAUGHTER from Maggie Gyllenhaal, Michael Bay’s AMBULANCE, Destin Daniel Cretton’s JUST MERCY, the BOOK CLUB franchise, and recent Sundance Film Festival Audience Award winner CHA CHA REAL SMOOTH. The studio produces premium TV series, including the 14 Emmy-nominated Severance, See and Truth Be Told for Apple TV+, Wolf Like Me for Peacock, Life & Beth, Nine Perfect Strangers, and McCartney 3, 2, 1 for Hulu, Tokyo Vice for HBO Max, and Scenes From A Marriage for HBO. FIFTH SEASON also handles global distribution for dozens of hit series in addition to its own studio productions, including Killing Eve, The Morning Show, Normal People, and The Night Manager.Learn more at FIFTHSEASON.com, follow us @FIFTHSEASON.

‘Work, Strife, Balance’ would have been a good title too.