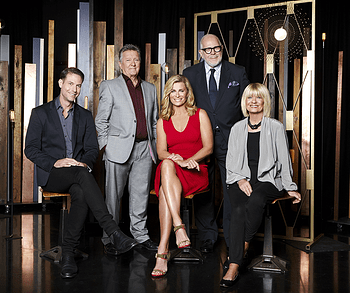 Australia’s diverse and thriving arts scene will be covered in a new weekly arts guide and review program STAGE & SCREEN hosted by Deborah Hutton and produced exclusively by Foxtel Arts premiering on Wednesday May 11 at 8.00pm AEST.

Each week Deborah will be joined by regular presenters, Australian iconic movie host Margaret Pomeranz, legendary television critic Graeme Blundell, Australian cultural figure Leo Schofield and one of the country’s foremost arts writers’ Chris Hook from the Daily Telegraph, who will all provide viewers a snapshot and their critical insights of what’s on show, where and when across, theatre, music, opera, dance, visual art, film and television.

STAGE & SCREEN will also feature unique interviews with arts luminaries and the star performers of cinema, television and the live performing arts, offering insight into the diverse offerings and talent that exists right across the Australian arts and culture landscape.

Fraser Stark, Foxtel Arts’ Channel Manger said, “With so much coverage of the Arts to deliver each week the channel is pleased to have assembled contributing talent of such suitably high calibre for Stage & Screen. It’s an impressive array of critical perspectives – fitting of the rich and diverse subject matter it has before it.”

The premiere episode of STAGE & SCREEN, Wednesday May 11 at 8.00pm on Foxtel Arts covers what’s on in theatre performances around the country, music and dance, must-see exhibitions, upcoming cinema releases and what’s on the small screen.

After successful international seasons including London’s West End and Broadway, GHOST: The Musical comes to Australia for the very first time and stars Rob Mills and Jemma Rix sit down with Stage & Screen for a revealing chat in between performances at Sydney’s Theatre Royal.

Throughout the week you will find your story, find your vision, find your beat, and find yourself on Foxtel Arts (Channel 133).