“An Australian and global audience will see the best in the world compete in our primetime. We have the best in the business to deliver an outstanding coverage. The Rugby League World Cup is the starting point for a remarkable six months of major sports events on Seven, including the Melbourne Cup, the major golf tournaments in Australia, the Australian Open Tennis, the Olympic Winter Games, the Commonwealth Games and the 2018 AFL season all in our timezone. This will be the largest premium events schedule on a single television network this country has ever seen, across every screen to all Australians.”

Gary Belcher – prolific try-scoring fullback, capped 15 times for Kangaroos, 16 Origins with Queensland and 148 club games with Canberra Raiders. He is a two-time Premiership winner with the Raiders (1989–90), a three- time Dally M Fullback of the Year, played 6 World Cup matches for Australia and has been involved in rugby league broadcasting since his retirement in 1993.

Mark Braybrook – highly-regarded TV and radio caller with over 25 years’ experience in rugby league broadcasting. Mark’s family is steeped in the sport; father, Denis, was a former first-grade referee and grandfather, Garnet, was a member of Newtown’s 1933 Premiership side scoring a try against St George in the final. Mark has called AFL, Rugby Union and Soccer Internationals, hosted commercial radio coverage at five Olympics and recently commentated gold-medal performances from the Australian women’s rugby team and shooter Catherine Skinner at Rio 2016 for Seven.

Laurie Daley — one of the most decorated players at club, state and international level. He made his first-grade debut at just 17, and his international debut before his 21st birthday. He captained NSW in State of Origin 13 times, playing in five series wins. He is the current NSW coach. Laurie played 26 Tests for Australia, including seven as captain. At club level, he played 244 first-grade games for the Canberra Raiders, winning three premierships.

Allana Ferguson — one of the stars of Australia’s rugby league women’s side, and one of the first women to sign a professional playing contract, lining up with the Cronulla Sharks. She was selected to play in Australia’s 2016 Rio Olympics women’s rugby sevens side but injury prevented her from competing. A PE teacher at Woolooware High School, Allana is passionate about rugby league and developing the women’s game in Australia. She will provide expert analysis on both the men’s and women’s Rugby League World Cup as part of the Seven team.

Ryan Girdler — NRL premiership winning player, NSW and Australian representative and now a commentator across radio and TV. Ryan played for the Illawarra Steelers and the Penrith Panthers, winning the 2003 premiership with the Panthers. In all, he played 227 first-grade games, 10 games for NSW and 14 times for Australia as a goalkicking centre.

Brett Kimmorley – diminutive halfback, capped 22 times for Australia, 10 Origins for New South Wales and 307 first-grade games. Noddy, as he’s affectionately known, starred in Australia’s 2000 World Cup Final win (40-12) over New Zealand at Old Trafford. He won the Clive Churchill Medal in Melbourne Storm’s first-ever NRL title success in 1999. As Dally M halfback of the Year in 2000, he was instrumental in leading NSW to their most- recent 3-0 Origin series clean sweep against Queensland.

Andrew Moore – an accomplished rugby league caller on radio since 1994, Andrew has commentated on more than 40 State of Origins and hosted primetime TV panel shows. His versatility is proven, calling many major international events such as World Cup qualifier soccer matches, golf, tennis and AFL.

Adrian Morley – destructive forward, capped 30 times for Great Britain and 17 times for England between 1996 and 2012. Morley represented England in the 2000 and 2008 World Cup tournaments. Morley was the first player to win both an NRL (Sydney Roosters, 2002) and Super League (Bradford Bulls, 2005) title. In all, Morley played nearly 500 club games across Super League and the NRL, appeared in three consecutive NRL Grand Finals and was named 2010 Rugby League International Federation Prop of the Year.

Andrew Ryan – relentless back-rower, capped 11 times for the Kangaroos, 12 Origins with New South Wales and 291 NRL club games. He captained the Canterbury-Bankstown Bulldogs to a premiership win over the Roosters in 2004, won back-to-back State of Origin series with the NSW Blues in 2004–05 and was a powerful force in the Kangaroos’ Tri-Nations triumphs in 2004 and 2006. Current NRL ambassador, NRL commentator on ABC Grandstand and former Fox Sports expert.

Scott Sattler – tireless backrower, played 203 first-grade games and is best known for his 2003 Grand Final heroics with premiership winners Penrith Panthers. Sattler turned the momentum of the decider with a famous try-saving tackle on Sydney Roosters winger Todd Byrne. Son of South Sydney legend, John Sattler, Scott represented Queensland at Origin level and has been working in sports media since retiring from the NRL in 2004.

Brent Tate – resilient centre, capped 26 times for the Kangaroos, played 23 State of Origins with Queensland and 229 NRL games. Tate won a premiership with Brisbane Broncos in 2006. He was named man-of-the-match in game three of the 2013 Origin series, which extended Queensland’s record winning streak to eight series. Tate represented Australia in seven matches across the 2008 and 2013 World Cup tournaments.

Jim Wilson –Seven News Sydney’s Sports Director. A self-described “sports nut” and rugby league fanatic, Jim grew up on Queensland’s Gold Coast and has worked as a journalist for more than 20 years, starting as a cadet at Brisbane’s Courier Mail. During his career as a sports journalist, Jim has covered some of the most significant sporting events of recent times including seven Olympic Games, the State of Origin series, the British Open golf, World Cup soccer and AFL Grand Finals. Jim has been part of the Seven Sports team since 1992, holding senior correspondent and reporter positions in Brisbane, Melbourne and Sydney.

The 2017 Rugby League World Cup is the fifteenth staging of the game’s pinnacle international event which dates back to 1954, making it the second oldest World Cup of any sporting code. This year’s Rugby League World Cup will be played in 13 cities across hosting nations Australia, New Zealand and Papua New Guinea from 27 October to 2 December 2017. 14 teams will play 28 games over five weeks in front of an expected 450,000 fans, making it the largest sporting event in the region this year.

This year’s tournament will be first time the Women’s Rugby League World Cup has been held as a standalone event, with the pool matches to be played at Southern Cross Group Stadium in Cronulla (Sydney) as triple- headers on November 16, 19 and 22 with the semi-finals to be played as a double-header on November 26. The Rugby League International Federation confirmed that Australia, Canada, Cook Islands, England, New Zealand and Papua New Guinea will be the six teams to contest this year’s tournament.

A good commentary line-up. Andrew Moore and Andrew Ryan are both from the ABC, does it mean they will only call matches involving Australia for Seven, and not ABC Radio?

Awesome team, I’m really looking forward to Seven’s coverage. Great to see Renee Gartner involved, some good commentary decisions with Moore, Ginnane, Girdler and Sattler. It will also be interesting to see what Bill Harrigan has to offer.

I’m a bit confused by the decision of Allana Ferguson. Won’t she be playing and training with the Jillaroos? I doubt very much with the triple-headers she’ll be able to provide much analysis of the Women’s draw. I assume she’ll likely be stationed in the Sydney studios in that case.

Either way really looking forward to the RLWC. The opening game will be massive!

Who’s the live streaming partner? Would prefer to not watch my Rugby League in crappy SD here on 7QLD.

Great commentary team. Their promo shots also show the set. I assume this will be the set for the pool games and they will be at the stadium for the finals.
So glad they got Dan Ginnane, I think he will be great. Ryan Girdler is great too.
I think they are using Bill Harrigan for the women’s games but I hope they use him like Triple M do (coming in on refs calls and video ref).
I think the #1 team will be Ginnane, Daley, Kimmorley & Harrigan with Girdler on the sideline. Here’s hoping. 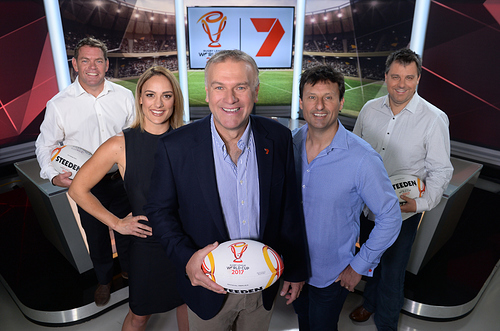 A good commentary line-up. Andrew Moore and Andrew Ryan are both from the ABC, does it mean they will only call matches involving Australia for Seven, and not ABC Radio?

Apparently the rights seller (I think IMG) is asking for an exorbitant amount of money for the radio commentary rights. Watch this space.

Who’s the live streaming partner? Would prefer to not watch my Rugby League in crappy SD here on 7QLD.

Seven has the streaming rights, according to press releases when the network secured the rights to men’s and women’s tournament:

…in a first for the Women’s Rugby League World Cup, the Seven Network will broadcast all 12 matches of the tournament on free-to-air television and also stream all 12 matches live across the “screens of Seven”.

Look forward to 7 having the worl cup they should do a god job.

Will the 2017 RLWC be broadcast on the main channel or 7mate in Melbourne, Adelaide & Perth?

If it’s the former (due to a contract or commercial arrangement), great for the tournament, but I don’t think it’d be a good idea ratings wise at all.

The opening game and the final will almost certain to air on main channel in Melbourne and Adelaide.

The three hour time difference between Perth and Sydney will be a big problem. Seven can choose to show some matches at 4.30pm leading into Seven News at 6.30pm, but then it will need to find other programs to fill the rest of the night.

Apparently the rights seller (I think IMG) is asking for an exorbitant amount of money for the radio commentary rights.

They always say that.

They always say that.

Goodness me Johnson, kudos to the work there

I don’t think Andrew Moore has done any RL for TV? same thing with Dan Ginnane. Mark Braybrook used to call matches for Foxtel i think.