This year’s final 7-day consolidated TV ratings results are now available from OzTAM with the Nine Network confirmed in first place with 29.5% of the 5-city audience. Seven took out second place with 29.1% ahead of Ten with 17.2%, ABC with 16.4% and SBS on 7.7%.

Network shares, especially for Seven and Nine, were significantly different across the five markets. Nine won in NRL markets with 32.0% in Sydney and 32.1% in Brisbane.

Perth viewers preferred multichannels the most with a 36.7% share of the audience driven by 7Mate’s 5.7%. They were least popular in Sydney and Melbourne with a 29.9% share.

The following table shows the difference in percentage points for channel and networks shares compared to the 2018 ratings period. The large majority of changes show a change of less than one per cent. The biggest changes were in Sydney where there was a net change of 4.7 (Nine up 2.7 and Seven down 1.7). Brisbane had the next biggest turnaround with a 4.3 share change. 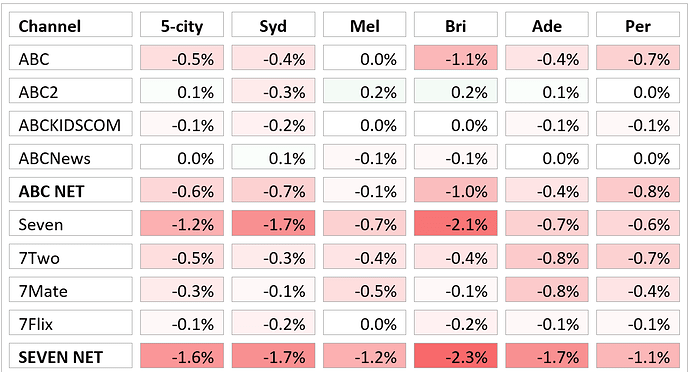 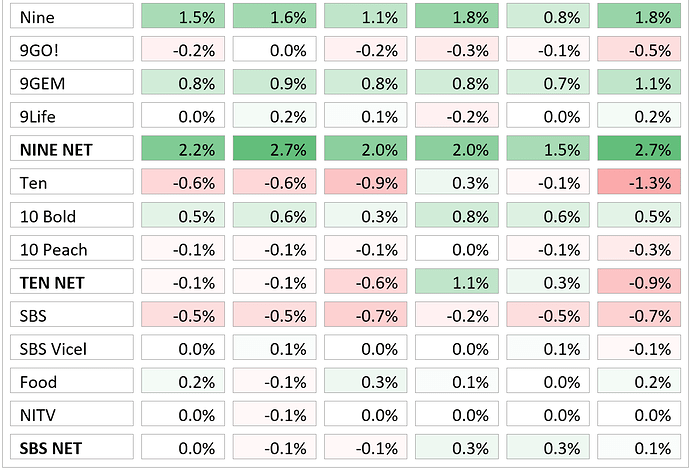 Interesting that Nine won Melbourne (first time since 2006 with local Comm Games?) in main channel share, but when multi-channels are included Seven still came out on top (7Food Network largely to thank perhaps?)

And Seven thanked those markets for their loyalty by cutting popular local programs.

You can bet right now that Seven is really hoping that next year’s Tokyo Olympics will be a ratings bonanza after this year trailing Nine by 4.3% in Brisbane and a whopping 5.4% in Sydney!

Honestly, you’d expect the ratings battle in Australia’s largest city to be extremely competitive, but instead the gap between the #1 and #2 networks in Sydney was the 2nd largest of all five metro markets this year. I somehow doubt that axing a fairly popular, long running local lifestyle program (even if Seven stuffed it up a bit by moving it from Saturdays to Sundays a few years back) is going to help matters.

Nine: Channel Nine primary channel was up in all 5 markets and that’s thanks to the Australian Open, Married at First Sight, Lego Masters, Australian Ninja Warrior, The Block and sporting events. Nine Network Perth has provided a significant boost in primetime shares thanks to the promotion of State of Origin Game 2 at Optus Stadium, mid-year Cricket (Cricket World Cup and The Ashes). However, Nine didn’t win a week in Perth.
Seven: Meanwhile, Seven was down from last year, despite having the AFL this year. Channel 7 Brisbane has suffered a significant drop from last year when they had the 2018 Commonwealth Games.
Network 10: After a slow start in ratings, Channel 10 managed to gain some momentum in the 2nd half thanks to the Bachelor, HYBPA, The bachelorette, RWC2019, Melbourne Cup, The Masked Singer, Gogglebox, The Amazing Race Australia. THe primary channel in Perth took a big drop in shares. (I don’t know why shares have dropped in Perth, considering it was the strongest market 5-8 years ago). Nevertheless, the Bledisloe Cup between the Wallabies and the All BLacks did well in Perth. Meanwhile, 10Bold has provided a significant boost this year with drama and sport.
SBS: What can I say. SBS has dropped from this year (following the success of the 2018 FIFA World Cup).
ABC: The network shares have dropped in all 5 cities. ABC Primary channel dropped in Sydney, Brisbane, Adelaide and Perth. However, the primary channel in Melbourne remained steady.

When the Tokyo 2020 SUmmer Olympics kicks in from 24 July to 9 August 2020, expect significantly strong ratings on the east coast. Channel Seven will increase its primetime shares on the east coast by a significant percentage. Will at some stage, Perth remain strong market for Seven again in 2020?

This article wraps up the reporting on the “official ratings period”. It’s been a year of significant change that has helped make reporting the results just that little bit more enjoyable.

Just my take on the “official” survey period to finish up.

The ratings are primarily designed for advertisers who are commercial TV’s only customers (forget the viewers!). They are used by networks to set rates for advertising in the coming year.

However, there is a problem at some times like Easter and Christmas when larger than normal numbers of people are on holidays. The problem is that the ratings system underestimates how many people are watching TV. That happens when a household with an Oztam box goes on holiday from one market to another. Becasue they don’t take the Oztam box with them, their TV viewing is not measured in either market.

So, these times would return lower advertising rates than should be the case.

This partly explains, I think, a reason for the non-ratings period not being included in reporting. However, it doesn’t mean that lower quality programming should be in place at the time; that’s just lazy programming.