10 heads into 2020 with confidence and momentum

It follows a strong performance in the second half including:

Network 10’s chief executive officer Paul Anderson said: "Network 10 achieved a lot over the past year, from establishing a powerful new Sales team and investing in data and technology, to making television advertising even more effective, to expanding our digital media assets and investing in great new content such as The Masked Singer Australia and the Melbourne Cup Carnival.

"We are growing, across all our platforms. Our commercial share in under 50s and other key age groups is increasing. Our advertising revenue share is growing. Our digital platforms are posting record audiences.

"Our shows are engaging, innovative, noisy and connect emotionally with Australians like few others can. The GoFundMe page set up for Australian Survivor’s Luke Toki after he was voted out of the game and Waleed Aly’s monologue on The Project following the heartbreaking Christchurch massacre are just two examples of our ability to connect with people like no other network.

“Next year, for the first time in our history, we have a true 50-week schedule of known content- content that is familiar, brand-friendly and taps into the younger age groups who are very hard to reach at scale. As part of one of the biggest global content creators in the world, we are absolutely focused on making great content that creates conversations beyond the actual broadcast - across digital and social.”

Network 10’s chief content officer Beverley McGarvey said: "It’s been a big year for 10 as we bedded down our 50 weeks of entertainment programming strategy. It’s great to see strong momentum as we move into 2020 with year-on-year commercial share growth in under 50s and all key demos.

"We took some big swings this year and, in many cases, they paid off- 75% of our big domestic 7.30pm franchises are returning next year.

"Our entertainment programming performed strongly. 10 had the most shows of any commercial network in the top 20 entertainment shows of the year across under 50s and all the key demos.

"We started the year re-inventing summer programming by launching I’m A Celebrity… Get Me Out Of Here! two weeks earlier than in the past, and against the traditional summer sport. The show beat the cricket every single night it was up against it and beat the tennis more than half the nights it competed against it. The show finished with its highest ever commercial share.

"In September, we launched an absolutely bonkers show about celebrities singing in costume. The show, The Masked Singer Australia, was the biggest launch on 10 in four years.

"Our Bach-Nation shows - Bachelor In Paradise, The Bachelor Australia and The Bachelorette Australia - dominated the demos during their runs, and cemented their place as true watercooler conversation shows. They also proved their success across platforms, with all three achieving 10 Play’s biggest BVOD audiences this year.

"After 11 years, we farewelled Matt, George and Gary as MasterChef Australia’s judges and crowned the show’s youngest ever winner in Larissa Takchi. We’re really looking forward to a revitalised and refreshed MasterChef Australia in 2020 with our brand new judges Jock Zonfrillo, Melissa Leong and Andy Allen.

"This year we welcomed Five Bedrooms to our screens and so did the rest of Australia, with the show
finishing as winter’s #1 drama. Dancing With The Stars also dazzled its way into our schedule and we’re looking forward to building the brand next year with an epic new cast.

"We also proved our ability to build brands as seen by the success of Australian Survivor, which achieved its biggest season ever in 2019.

"Have You Been Paying Attention? and Gogglebox continued to bring the laughs later in the evening, and this year, they were joined by Pilot Week success story Kinne Tonight. All three consistently topped the demos in their timeslots.

"Sport remained an important part of our 2019 schedule. Our Rugby World Cup 2019 multi-platform broadcast saw a tournament-on-tournament increase in audience while our 2019 Melbourne Cup Carnival coverage across all our platforms gave us a solid first year foundation for our long-term partnership with the Victoria Racing Club.

"Our news and current affairs shows - The Project, 10 News First and Studio 10- continued to set the agenda, covering issues that mattered to all Australians. In its 10th year The Project continued to deliver the big stories that get Australians talking.

"Our linear success was complemented by our booming digital platforms. 10 Play, 10 Daily, 10 Speaks and 10 All Access have all had record years, giving audiences more ways than ever to engage with our content.

“While the 2019 ratings period has finished, we’re continuing to run new content right up until Christmas before we kick it all off again on Sunday 5 January 2020 when we return to the jungle for a brand new season of I’m A Celebrity… Get Me Out Of Here!.”

The Bachelorette Australia: Up 19% year-on-year, 24% including BVOD. The biggest growth of any prime time show this year across all commercial networks.

Australian Survivor: Up 8% year-on-year, 10% including BVOD. Biggest season ever.

The biggest audiences across platforms for 1O’s big shows: 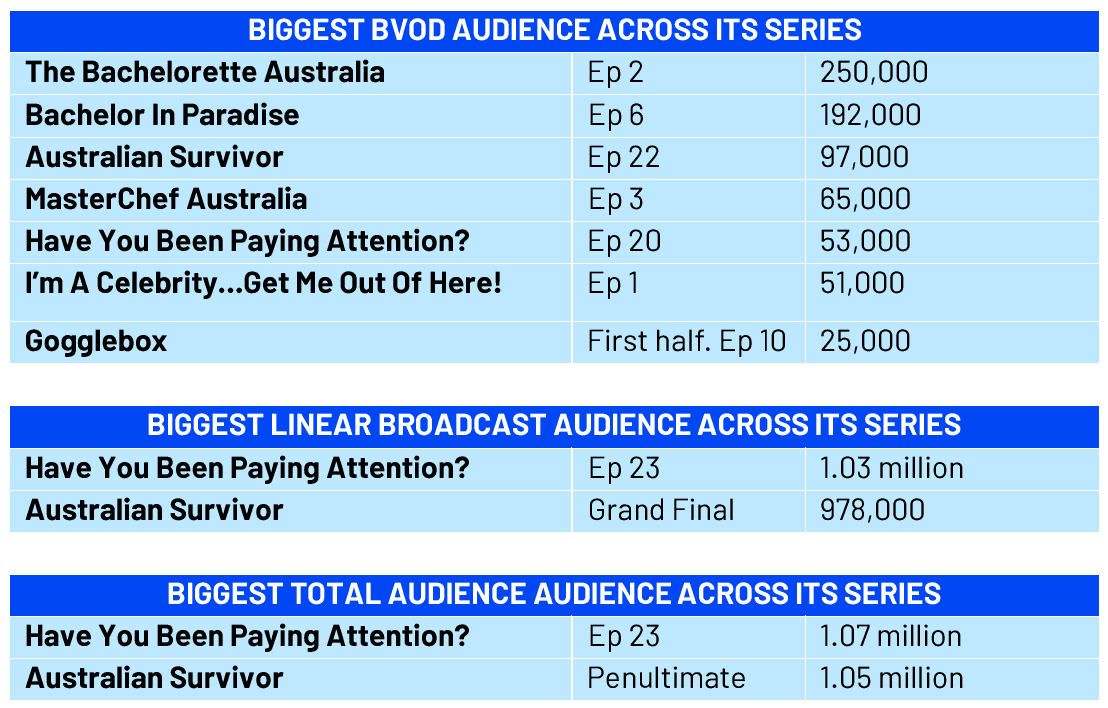 The shows were: The Masked Singer Australia, The Amazing Race Australia, Five Bedrooms, Dancing With The Stars, Kinne Tonight, I Am… Roxy! and One Born Every Minute Australia.

10 's got the entertainment genres covered:

10 Sport is getting faster:

10 Bold and 10 Peach are switched on in day time and building year-on-year:

The podcasts were: The Professor and The Hack with Peter van Onselen and Hugh Riminton, Where’s William Tyrrell featuring Lia Harris and Natarsha Belling, The Western Front with Tim Gossage and Lachy Reid, The Reality Bite, Hammer It Home with Barry du Bois, Short Black with Sandra Sully and Talking Rugby with Matt Burke.

A new, competitive line-up in Q1.

Network 10’s chief sales officer Rod Prosser said: "In 2020, we’ll be delivering a consistent line-up with all the shows you know and love, across more platforms than ever.

"Better yet, we’re also making it easier to trade across these platforms. Our dynamic trading platform Buy10 launched in October and next year, thanks to our partnership with You.i TV, we’re revolutionising the advertising experience on our apps.

"Next year will also see the highly anticipated launch of VOZ, which will better communicate a show’s total audience across all platforms. And we committed to creating a dedicated demand side platform for all agencies to access our inventory.

“Our shows are noisy and engaging, our network is growing and our Sales team, now fully embedded into our company, is as hungry as ever.”

Despite dropping its primetime share by 0.1%, CHannel 10 did reasonably well. HYBPA and AUstralian Survivor has gone up from last year and reached its record high ratings. 10 should be very proud of what they’ve achieved. 10Bold has delivered its growth due to old eps of drama shows and sport.The 2018-19 A-League Grand Final did reasonably well especially in the Perth market. 10 should be on the way up further.

A typo. A lower case L and a capital O makes it LO - one definition of LO is it is a shortened version of LOW. Network LOW.

Is this true? “Dominating entertainment programming all key demos”

All the lists I’ve seen of entertainment programming have Nine DOMINATING.

OK I see, regular series instead of telecasts

Zero mention of The Project or news. Zero. Shows how much they care about that.