Network shares, especially for Seven and Nine, were significantly different across the five markets. Nine won in Sydney with a network share of 29.3% ahead of Seven’s 28.3%. In the other NRL market, Brisbane, Nine recorded its highest share of 30.1% but was in a tie for first place with Seven.

Perth viewers preferred multichannels the most with a 35.8% share of the audience driven by 7Mate’s 6.1%. They were least popular in Sydney with a 28.3% share.

The following table shows the difference in percentage points for channel and networks shares compared to the 2017 ratings period. The large majority of changes show a change of less than one per cent. The biggest changes were in Brisbane where there was a net change of 3.5 (Seven up 1.9 and Nine down 1.6) that resulted in a tie for first place. Melbourne had the next biggest turnaround with a 2.8 share change. 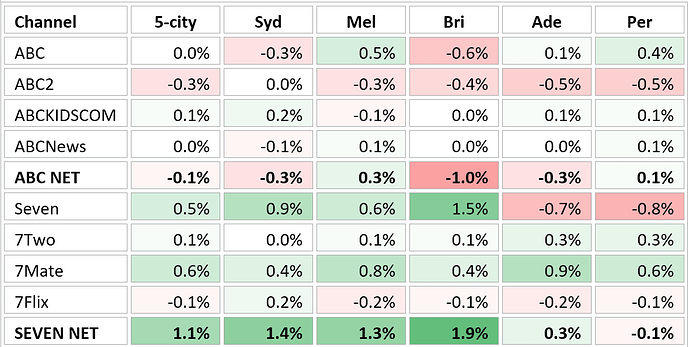 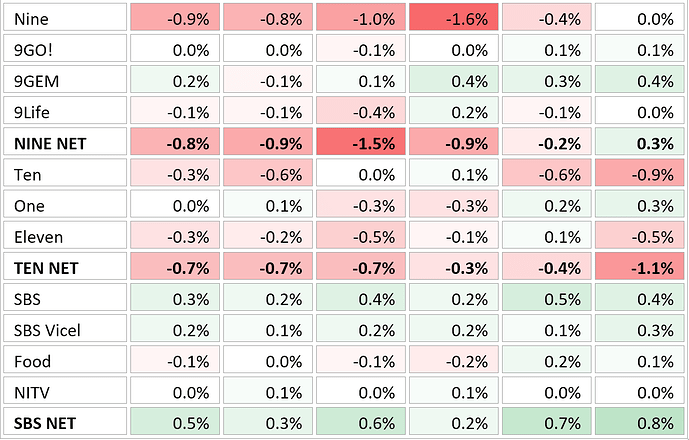 Data © OzTAM Pty Limited 2018. The Data may not be reproduced, published or communicated (electronically or in hard copy) in whole or in part, without the prior written consent of OzTAM. “Overnight” figures include “Live” (programs broadcast during the 2am-2am broadcast day) and “As Live” (programs recorded and then watched within the same broadcast day). “Consolidated” figures include Live, As Live and “Time Shift” (programs recorded and then watched within seven days of the initial broadcast).

Note: Totals may not equal sum of channels due to rounding.

Well, it does surprise me how significant the win was for Seven in Melbourne (network and main channel), even though Nine dominate the market with The Block, Married, News, ACA, 60 Minutes and TV Tonight regularly during the year said Nine won Melbourne in the weekly wraps.

I’m guessing AFL, weekends and multi channels are the winning factors in this market for Seven?

NB/ Thanks for this special info @TV.Cynic, we know how careful we/you have to be in regards to forum rules/agreements

I’m guessing AFL, weekends and multi channels are the winning factors in this market for Seven?

Even though Seven News doesn’t win Melbourne, the station usually wins the rating year as whole, thanks largely to its local programming.

thanks largely to its local programming.

Pretty much what I was getting at… As it’s really ‘code’ for AFL, even though that’s techncially networked programming from Seven Sport.

I’ve added a new table to the top article that compares results nationwide and per market with the 2017 ratings period.

Ouch! Nine down 1.5% in Melbourne. What happened there, any obvious? Actually very surprised.

As for Brisbane… Comm Games surely?

Ouch! Nine down 1.5% in Melbourne. What happened there, any obvious?

Ouch! Nine down 1.5% in Melbourne. What happened there, any obvious? Actually very surprised.

Oh, I don’t know. It’s almost as if…Seven had two major sporting events (Winter Olympics & Commonwealth Games) in the first half of the year!

That’d probably explain why Seven’s rating increases/Nine’s ratings decreases here in Sydney were roughly similar on a main channel basis, along with the 0.4% increase for 7mate.

It was just a fair question, let’s not get silly? These “major sporting events” are not exclusive to Melbourne, does not explain the significant rise for Seven Melbourne and drop for Nine Melbourne.

The Block was up, again.

So one factor might be the massive decline for Ninja, which some episodes did over 600k in Melbourne last year, this year struggled to get 300k losing regularly to MasterChef.

I think its got to do with the dominance of AFL coverage in Melbourne on Channel 7, espeically the finals football.