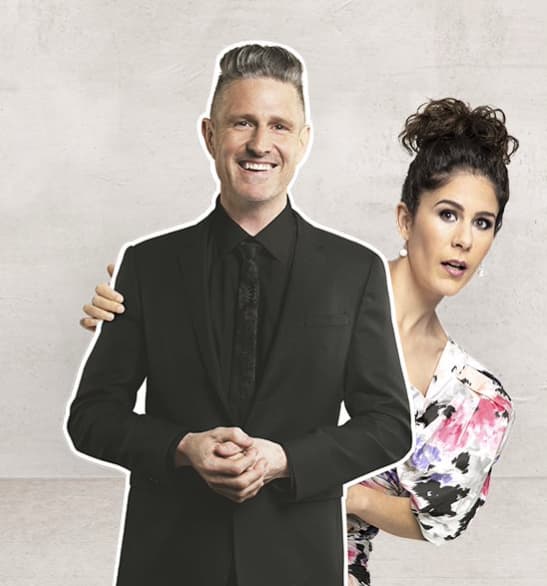 Forget fake news, here’s a true story: Question Everything , is a brand-new quiz-panel show from the mind of Wil Anderson that aims to give facts their swagger back. Hosted by Jan Fran (The Feed, The Project) and Wil Anderson ( Spicks and Specks fact check result: false), the eight-part series premieres Wednesday 18 August at 8.30pm on ABC TV and ABC iview.

In a world dominated by fake stories, false claims, scams, frauds and outright lies, Question Everything will dissect the news, sort the real from the rumours, separate fact from fiction and flatten conspiracy theories back down to Earth. Helping Jan and Wil question everything each week will be a revolving panel of up-and-coming comedians with the occasional big name thrown in too. At least that’s what anonymous sources close to the show tell us.

From the team behind Gruen , Question Everything will give audiences the tools to understand everything they see, read or sometimes share without reading. Viewers will be immunised against fake news, unless they refused to be immunised because they think it’s all a plot by Bill Gates to install 5G in their brain.

Jan Fran says “I cannot wait to get started. Question Everything is our chance to take a microscope to all the misinformation that we are bombarded with every day to see where it starts and how it spreads. At least, that’s a rumour someone sent to me on WhatsApp.”

Nick Hayden, ABC Head of Entertainment says: “I don’t usually trust press releases. They’re spin from the media elites trying to sell you something, wake up sheeple! But Question Everything truly will replace all the fake news in the world with facts. I read that on Facebook.”

Question Everything will air Wednesdays at 8.30pm from Wednesday 18 August on ABC TV and ABC iview.

Send in your fake news tips or stories to the Question Everything Tip Line - questioneverything@cjz.com.au

No Gruen this year then?

Another ‘quiz-panel’ style show from Aunty. Hopefully it’s nothing like the dreadful Win the Week.

Good that we will get fresh talent rather than relying on the same old comedians used for these sorts of shows.

I did not mind Win the Week - I think it could be great after settling in!

Jan Fran? No thanks.

What do people have against Jan Fran? I am a big Jan Fran fan.

What do people have against Jan Fran? I am a big Jan Fran fan.

She’s good on The Feed but a terrible host on The Project. Perhaps this show will suit her better.

I can not see a difference in her on either show. What am I missing?

Oh what a hilarious title for a show! and even more funnier Jan Fran is on it!

Question anything? No you can’t, you only agree with me and I’m right and if you don’t think so I will trawl your social media find any skerrick of information and cancel you for it and ruin your life!

I can not see a difference in her on either show. What am I missing?

On The Feed she was right in her element, aka lighter-approach to news/sports/entertainment stories, On The Project she’s fine as a panelist but as a host she tries too hard to appear ‘cool’ and she doesn’t have great chemistry with the likes of Lisa or PVO.

She’s not a comedian and tries too hard to be funny.

A little social distancincing for their first show 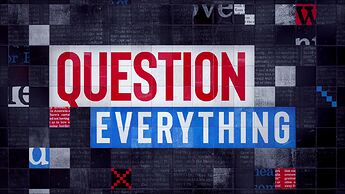 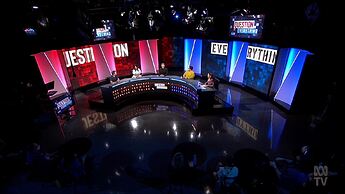 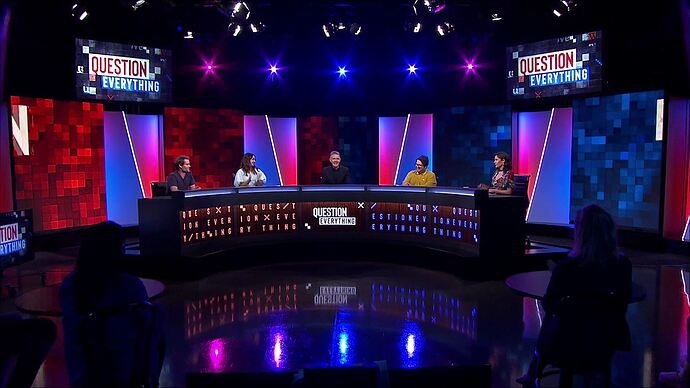 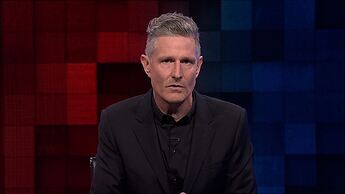 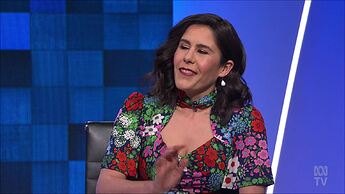 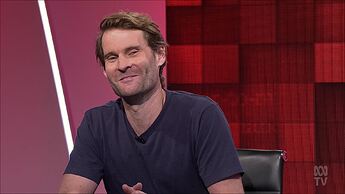 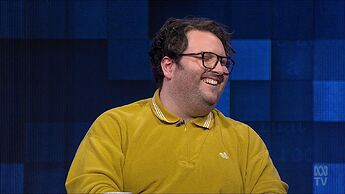 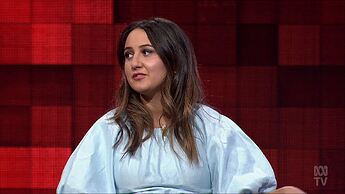 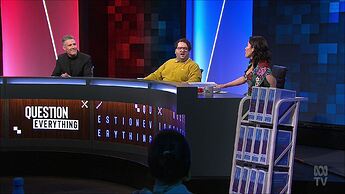 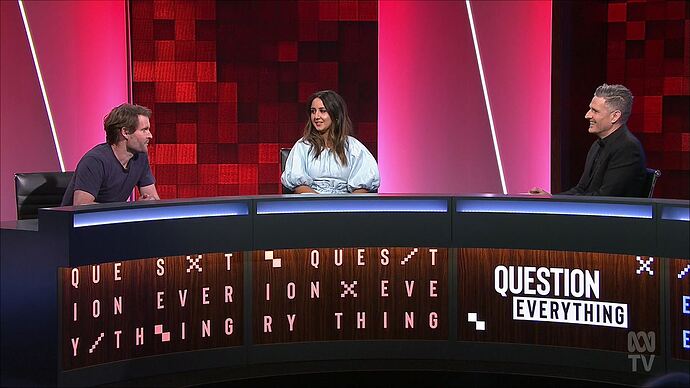 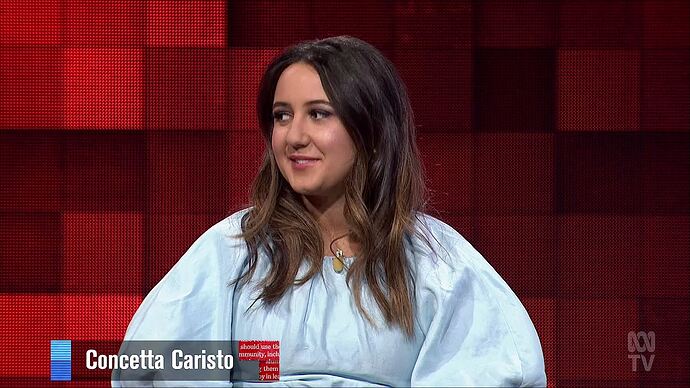 She’s not a comedian and tries too hard to be funny.

She was the funniest person on there… and she wasn’t that funny.

I’m not a fan of Wil Anderson so generally steer clear of his shows which is a shame because I like the premise of Gruen. I was hoping this show would be good but from what I saw tonight it was trying really hard to be funny but just ended up confusing. No idea who the guests were and no real enthusiasm to go and search them out.

At least Rosehaven is on now, a show that is actually funny.

Not very funny nor current. The majority of the news reports they discussed were several months old. I thought it was going to be about fact checking of news reports across the previous week. There wasn’t nothing that hadn’t been covered extensively before - and how old was the “Patient Zero” story?

It’s about as bad as Win the Week. Seriously what’s wrong with these recent ABC ‘comedy’ shows? All of them seem like try-hard attempts at being relevant and being ‘hip’.

and how old was the “Patient Zero” story?

To be fair some of their audience probably weren’t born when that came out! Not the initial mistake but the story about the mess up.

The Patient Zero story has been told multiple time since the start of the Pandemic - so I was questioning its currency.

Here’s one from February last year. Who is 'patient zero' in the coronavirus outbreak?

As the cases of coronavirus increase in China and around the world, the hunt is on to identify "patient zero". But can singling out one person in an outbreak do more harm than good?

Curiously, it was during the HIV epidemic that the term patient zero was accidently created.

Whilst investigating the spread of the disease in Los Angeles and San Francisco in the early 80s, researchers from the Centers for Disease Control and Prevention (CDC) used the letter “O” to refer a case of someone “outside the state of California”.

Other researchers wrongfully interpreted the letter as a number 0 – and so the concept of patient zero was born.

I wouldn’t go so far as to say that it was a terrible show and I don’t think it needed to be non-stop laughs anyway.

They were trying a bit too hard for laughs though at some points and there seemed to be quite a few forced laughs. I think the show has potential and could do well with a few tweaks.

No idea who the guests were and no real enthusiasm to go and search them out.

It’s not a bad thing to have new talent in a new show.