13 March 1980: The first edition of The Leyland Brothers: The Great Outdoors airs on ATN7. After 16 years at Nine, Seven had made the documentary makers a better offer much to the annoyance of their former employer who attempted to spoil the new venture by airing old episodes of Ask The Leyland Brothers on Saturday nights.

Others included John Harrison, Nick Bufalo (who would go on to play Dr. Ben Green in A Country Practice), and Tom Gleisner.

He was in the unaired pilot and some of those sketches made it into the first series, most notably their iconic Thunderbirds sketch. He decided to take the acting role in A Country Practice before the ABC picked up the D Gen series. Bufalo later appeared in some of the specials the group produced for Seven.

Meanwhile John Harrison would leave the team to become a lawyer. He would later make the odd guest appearance on the first series of The Late Show.

Outside of the 0-10 network, CTC7 in Canberra started the series in June, and TVW7 in Perth and TVT6 Hobart as far as I can tell didn’t start it until 1973.

In regional Victoria, GLV10 Gippsland and BCV8 Bendigo debuted the series at the same time as ATV0. Not sure if this was via a direct relay from Melbourne, or they played it from tapes.

It would be a relay - there wouldn’t be that many copies made - hence why the delay of the programme around the country.

14 March 1982: Media nerds settle in to watch TEN10’s Sunday night premiere movie, Network. The movie is introduced by Ita Buttrose and a Pacific Island cruise is on offer to a lucky viewer who can answer three questions about the movie. 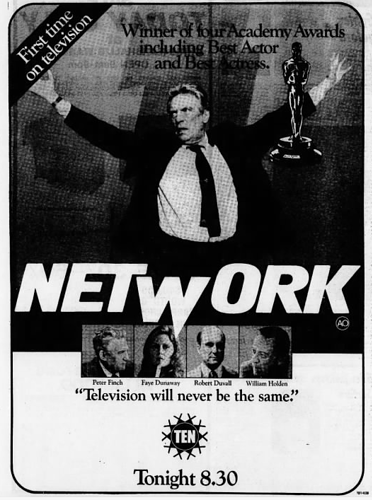 14 March 1988: The ABC’s new mid evening news and current affairs show The World Tonight debuts. Richard Palfreyman is the presenter. He was to have been joined by Paul Murphy but a contract dispute and altercation with ABC managing director David Hill saw Murphy return to SBS.

14 March 1989: A Country Practice fan favourites Jo (Josephine Mitchell) and Michael (Brett Climo) are married. The enduring popularity of the eight year old show and its characters ensures the couple grace the cover of TV magazines.

14 March 1990: Nine announces Graham Kennedy will be returning to television to present Australia’s Funniest Home Videos. The surprise news is released on the same day it is revealed Seven had secured a rare ratings survey win in Sydney. Cynical commentators believe Nine made the announcement early to draw attention away from Seven’s win. Nine does not reveal in the media release the new show will bump struggling soap Family and Friends from its prime time timeslot but that information is later leaked to the media signalling the network had lost faith in the production and they were about to swing the axe.

15 March 1982: TEN10 commemorates the 50th anniversary of the Sydney Harbour Bridge with a documentary made by Eyewitness News weatherman David Ellyard. The Proud Arch is shown during John Laws’ World and traces the history of the bridge from conception to construction and beyond.

15 March 1994: Andrew Denton makes the switch to commercial television when his much vaunted late night talk show Denton debuts on the Seven network.

16 March 1986: The launch of the Aussat domestic satellite makes it possible to extend SBS to Perth and Hobart. Both launch on the same day. 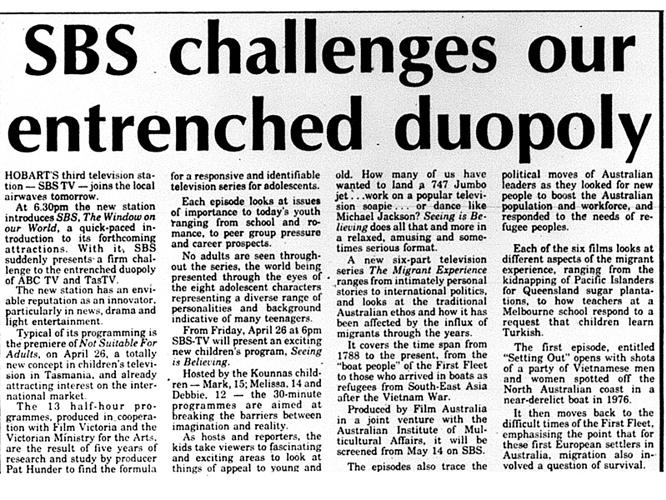 18 March 1985: Australia’s longest-running scripted series Neighbours was first broadcast on the Seven Network. Although it was successful in Melbourne, it underperformed in Sydney, so was axed. The show was bought by Network Ten which screened it from 20 January 1986 where it became a hit. Neighbours moved to Ten’s digital channel, Eleven on 11 January 2011 (which was later rebranded 10 Peach).

Neighbours is one of Australia’s most successful television exports, sold to over sixty countries around the world. It has been especially successful in the United Kingdom, where it was first screened on 27 October 1986. It moved to the UK’s Channel 5 in 2008 and is still one of the highest rating TV series.

24 March 1994 The AFL Footy Show went to air for the first time on Nine hosted by Eddie, Trev and Sam.

Network Ten launches its new multi-channel, One HD, presenting an all-sports format. One HD replaced the previous HD simulcast of the primary Ten channel. The wait is over tonight for ONE Source: Herald Sun, 25 March 2009   ABC1 SEVEN NINE TEN...

That night, Chris Judd and Ben Cousins went H2H for the first time since their departures from West Coast in 2007. Cousins did his hamstring in the fourth quarter.

Also, on this day in 2006, the Melbourne Commonwealth Games wrapped up with the Closing Ceremony.

That channel commenced broadcasting on that day 11 years ago at 7PM in Melbourne (due to live Richmond-Carlton AFL match at the MCG) and 7:30pm in other cities. The match was delayed in Sydney, Brisbane, Adelaide and Perth. Stephen QUartermain was the chief caller of that match during that night.

In 2006, 2.736 million people watched the Closing Ceremony of the 2006 Games on Nine, making it the 5th most watched program during that year.

Also in 1999, WIN TV was launched in Regional WA as a dual Nine-TEN affiliate. This resulted in GWN becoming a sole Seven Affiliate. Previously the GWN Network was the sole commercial network in regional areas (Seven, Nine, 10 affiliate).

A post was merged into an existing topic: Classic TV Listings

27 March 1998: Seven Darwin launches on UHF Channel 34. The city’s second commercial channel. The former commercial monopoly, NTD8, continues as a joint Nine-Ten outlet although it had apparently tried to have a joint Seven-Nine affiliation (leaving the new channel as Ten) but it was deemed anti-competitive by the broadcasting authority

Had the new Darwin digital channel been allowed to be a Ten affiliate, there wouldn’t be a debacle on January 1, 2003 when NTD dropped most of Ten programming (except AFL), and shows like Neighbours and Australian Idol would not be lost to the Top End until 2005 when it was picked up by Southern Cross Darwin.

Had the new Darwin digital channel been allowed to be a Ten affiliate, there wouldn’t be a debacle on January 1, 2003 when NTD dropped most of Ten programming (except AFL), and shows like Neighbours and Australian Idol would not be lost to the Top End until 2005 when it was picked up by Southern Cross Darwin

By the same token, if NTD was a joint 7-9 outlet there would inevitably be key shows from either network that would be missed out, too. There’s always going to be collateral damage when trying to squeeze three networks into two channels, as we also saw in Tasmania pre-TDT and even in Perth pre-Ten.