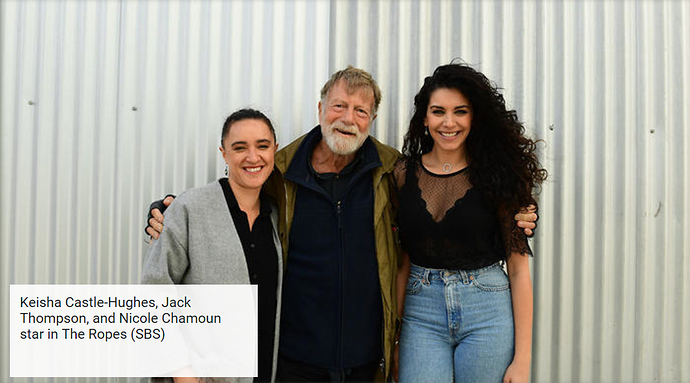 Produced by Lingo Pictures for SBS, On The Ropes is a sexy, gritty drama that is fast-paced and full of heart. It follows aspiring Iraqi-Australian boxing trainer Amirah Al-Amir (Chamoun) who has idolised her world champion father Sami (Naor) her entire life. While working in the family gym in Sydney’s west alongside her two brothers, Amirah negotiates a professional debut match for her hardnosed fighter Jess O’Connor (Castle-Hughes) with Sami’s long-time promoter Strick (Thompson). Furious that she has done this behind his back, her father threatens to cut her off. Desperate to chase her dream of transforming women’s boxing, will Amirah choose her fighter or her family?

“ On The Ropes continues SBS’s run of acclaimed provocative dramas that reflect Australian stories through a uniquely multicultural lens. This compelling and intense series is distinctly SBS, showcasing the complex and nuanced relationships of a migrant family alongside the physicality and deep-seated culture of misogyny in the sporting world.

“We are thrilled to be creating this stellar drama with the team at Lingo Pictures and an incredibly talented cast with a wealth of experience from all corners of the globe. ”

“ SBS has been supporting beautiful, daring drama and we are delighted to be working with them on On The Ropes. The world of boxing is passionate and fraught with adversity and creating a female driven story within this world is exciting. We are thrilled by the talented cast attached to portray this, including a fearless gang of women lead by Keisha Castle-Hughes and Nicole Chamoun. ”

“ On The Ropes is a story of female defiance that tackles gender inequality, multi-generational conflicts and the challenges faced by displaced immigrant families. Helmed by a predominantly female creative team, this series is yet another meaty drama commission from SBS who are at the top of their game with back-to-back high quality series from Safe Harbour to Sunshine , The Principal and Deep Water .”

“ On The Ropes is a fantastic project for NSW that delivers realistic Western Sydney locations and storytelling as well as great representation for female and culturally and linguistically diverse filmmakers, cast and crew. In addition to funding, we are also proud to foster new creative talent in the Australian screen industry by supporting director Shannon Murphy with two female crew attachments for the series. ”
- Create NSW Director of Screen Sector Investment, Sophia Zachariou

On The Ropes is a Lingo Pictures production for SBS, with principal production investment from Screen Australia in association with Create NSW.

Mod edit: Ratings outside OzTAM top 20 not permitted to be posted here. Thanks.

I always thought it was going to be a tough sell. A Middle Eastern themed series about female boxers. Talk about niche. Who would want to watch it?

If On the Ropes was on Foxtel those meagre ratings would be considered a success and it would be their number 1 program for the night.

But I doubt it would attract those ratings on Foxtel. The ratings would be a lot worse.

Would it have worked on a commercial network? On the Ropes to screen at Series Mania

TBI reports the series has been sold to US streamer Crackle, CBC in Canada and Rialto Channel in NZ.