4.74 billion minutes streamed on 7plus

As the Olympic Games Tokyo 2020 came to an inspiring close last night, more than 20 million Australians have tuned in to watch the Seven Network’s innovative coverage of the 17 days of the Games, making it the biggest television and streaming event in Australian history.

From the Opening Ceremony on Friday 23 July to last night’s Closing Ceremony, 20.2 million Australians watched Seven’s live, free and exclusive broadcast of Tokyo 2020, with 41% watching on both Seven and 7plus.

Across the 17 days of coverage (includes Opening Ceremony), the average full day broadcast audience was up 80% on Rio 2016 in the capital cities and up 71% nationally.

Seven Network’s average prime time capital city audience from 6.00pm to midnight grew by 12% from week one to week two of the Games.

Channel 7’s share alone was 43.0% across the first week and 43.7% across the second week – more than double its closest rival and more than four times the share of the third ranked primary channel

7mate recorded an 11.1% commercial share across Tokyo 2020, making it the #1 multichannel and the #3 free-to-air commercial channel – trumping a rival primary channel.

With a total audience of 3.85 million viewers nationally, including time-shift and BVOD audiences, the Opening Ceremony is the most most-watched TV program of 2021.

Tokyo 2020 has boosted Seven Network’s strong momentum. Seven is currently #1 in the 2021 survey year with a 40.8% year-to-date commercial share. It has won 18 weeks of the 32 weeks so far in calendar 2021 and is the only network growing its commercial share in 2021.

With more than 40 Olympics channels, 7plus set new Australian streaming records during the competition, adding more than 2.8 million new registered users, bringing its total number of registered accounts to more than 9.2 million, an increase of 44% since Tokyo 2020 started.

Australians watched more than 4.74 billion minutes on 7plus, making it the biggest digital event in Australian history.

On 25 July, 7plus delivered the biggest day of streaming in Australian television history with 376 million minutes, shattering the previous record of 86 million (held by a State of Origin rugby league match day this year) and 10 times more than the biggest day recorded for Rio 2016.

7plus was particularly popular with younger viewers, with VOZ data recording 18% of people 18 to 39 watched the Olympic action exclusively on 7plus, delivering an incremental audience reach on broadcast of 32% over the first 12 days. The incremental reach is even higher for men aged 18 to 39, with viewing on 7plus extending the average broadcast day reach by 43%.

Seven West Media Chief Revenue Officer and Director of Olympics, Kurt Burnette: “We came into the Games confident Tokyo 2020 would be a success, but the record-breaking reaction from audiences exceeded all expectations.

“Our exclusive, live and free coverage on Seven and 7plus was unmissable entertainment for millions, as our Aussie athletes equaled their best Olympic performance ever and provided Australia with much-needed inspiration. For the brands involved with delivering the Games across the screens of Seven, it represented the largest and most addressable marketing platform ever created.

“The success of our innovative coverage is testament to the incredible people we have behind the scenes and on-screen bringing must-watch moments to viewers. From our exceptional hosts and commentary teams to the excellent production and operations teams across broadcast and digital, everyone worked together to deliver a world-class experience,” he said.

Australia’s pre-eminent sports broadcaster, Bruce McAvaney, said: “Notwithstanding the wonderment of the Tokyo Games actually going ahead, in terms of performances, they are arguably the most memorable Olympics of my lifetime on foreign soil.

“We’ve seen the emergence of a new group of champions. We’ve watched them give their absolute best, we know how hard they’ve worked to get there and we’ve shared moments of joy and sorrow alongside their families and friends.

“There are some standout performances that seem to have struck a chord with us all. We need a lift right now and a story to follow and those have built up as the Games have evolved.” 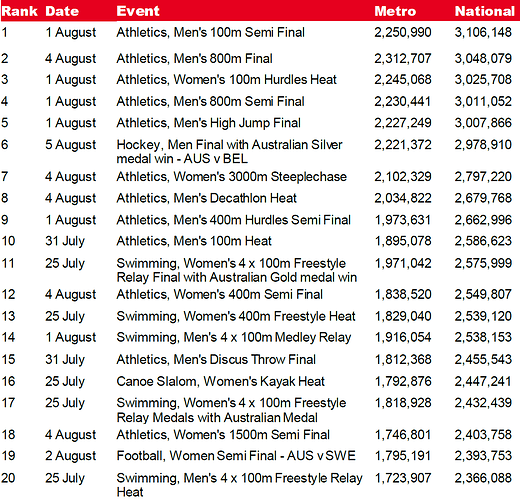 And MS users should check out the OzTam and RegionalTam websites (publicly available reports) and see the market breakdowns (it’s only got the week before last at the moment as it’s Cons7).

But the results in regional Australia are commensurate with metro, pretty unbelievable.

not mentioning any specific data/details to abide by MS rules:

In fact, so much so, even NBN is now losing the YTD surveys!

And reg wa matched what @TV.Cynic was saying about Perth most days in his ratings articles, had the lowest shares.

Substantial numbers for the Tokyo Olympics on CHannel 7. As well, the friendly timezone helped Channel 7 boost its primetime shares.
I think 7 should be very happy about the results that they have got so far. Streaming numbers have gone up from RIo 2016.

Rio was mostly morning/late night with ratings down. Tokyo 2020 is the most watched Olympics since Beijing 2008 in Australia

And just in addition to my comment above, it looks as though Nine are still leading Sydney and Brisbane markets, but by a much slimmer margin than a few weeks ago and I’m sure after last week (which was higher than week 1 of Tokyo) and this week (Closing Ceremony, The Voice launch and if The Voice and say programs like Seven News continue a good run), it could very well be neck-and-neck (within a few .0%) in Sydney and Brisbane come the end of this week?

Not sure if @TV.Cynic knows the live data or can correct anything I’ve said

But considering State or Origins, NRL and Nine News leading those two markets and after the disastrous shows in Q1 against Married, that’d surely be top effort and put a smile on faces at Seven.

Realistically, I still expect Nine to be #1 in Sydney & Brisbane at the end of the 2021 ratings year (Surely The Block + NRL Finals will help them catch up?) but by a reduced margin due to the Olympics.

Realistically, I still expect Nine to be #1 in Sydney & Brisbane at the end of the 2021 ratings year (Surely The Block + NRL Finals will help them catch up?) but by a reduced margin due to the Olympics.

Yes, that’s all very interesting and should’ve expected such a reply, but think my point might’ve been missed:

considering SOO, NRL and Nine News leading those two markets and after the disastrous shows in Q1 against Married, that’d surely be top effort

The achievement is what I was trying to point out (even if focussing on a specific market is rather trivial compared to the standard metric of five city). There was no guarantee that Tokyo would be a runaway success and as many have said in the media and public there was a lot of negativity going into these games. So I guess these results (to mention just one) in a long list of reasons why the reported $100m can pay off for a network, it can mean taking better results to advertisers and an executive was quoted in a newspaper overnight saying “we can market that” (in other words even if a large profit was not from the Olympics alone, it could reap rewards later with like The Voice, SAS, etc).

Didn’t like the presenter line up in the studios.

I liked how 9 did the Tennis with a solo evening presenter like Bracey who actually did a good job without all the fluffy stuff. Gaze was terrible.