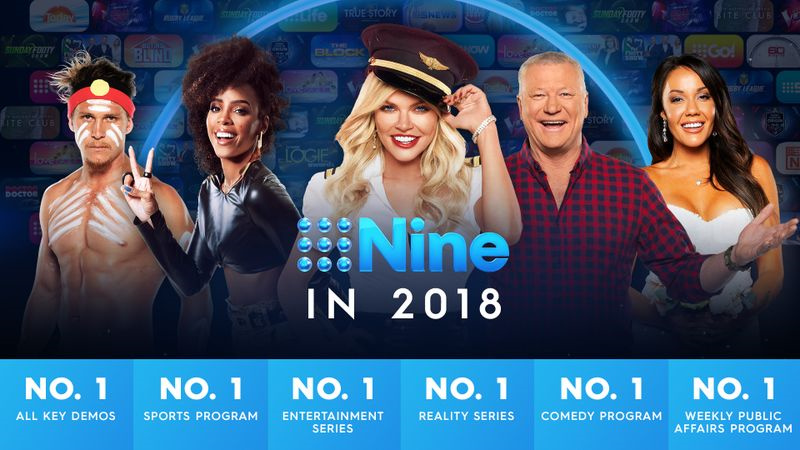 The TV ratings survey undertaken by OzTAM officially finished last night. While the final audience shares and ratings for some programs will have to wait until the 7-day consolidated numbers are released in one week it hasn’t stop networks promoting their yearly results.

According to the Nine’ release this morning, the networks main channel was number one in the key advertising demographics across the 40 weeks excluding the Commonwealth Games in week 15.

“With the official ratings period concluding overnight, Nine can lay claim to delivering advertisers more viewers with these key demos than any of the 18 other free-to-air channels.”

With network shares including multichannels, the Nine Network won the year with Total Grocery Shoppers with Child.

Australia’s No. 1 regular series and No. 1 reality series, Married at First Sight, wrapped the fifth season with its highest ratings yet. The series that had the whole nation talking concluded with a national average audience of 1.855 million viewers per episode, culminating in 2.588 million viewers for its finale.

The spin-off series, Talking Married, became the highest-rating program in the history of 9Life.

The world’s biggest and most enduring singing contest, The Voice, formed the backbone of Nine’s second quarter. Celebrating its seventh series in 2018, The Voice delivered a national average audience of 1.407 million viewers per episode, with 1.486 million viewers tuning in to the final episode.

Enjoying an unprecedented 14th series in 2018, Australia’s longest running reality series, The Block recorded a national average audience of 1.608 million viewers per episode with a massive 2.888 million viewers tuning in for the “Winner Announced” segment. The Block is the No. 1 entertainment program of 2018 with People 25-54 and Total People.

True Story with Hamish & Andy returned in 2018 for a second series of ten episodes wrapped up with a national average audience of 1.037 million viewers per episode.

The second series of Travel Guides, the observational fly-on-the wall program where diverse groups of people impart their opinions on their shared holiday experiences, achieved a national series average audience of 1.080 million. Travel Guides posted double-digit year-on-year growth, increasing its 5 City audience by 11.7% with People 25-54 and by 10.3% with Total People.

The first season of _Love Island Australia_ set a new benchmark for cross-platform television and digital performance. The joint 9GO!/9Now commission saw the show’s national cross-platform audience average 519,000 across television and digital. Love Island Australia also smashed records for digital, with eight episodes surpassing the 300,000-mark on 9Now and 28 of the 30 episodes achieving a VPM in excess of 200,000 – numbers that continue to grow. Some episodes recorded more than 60% of their combined overnight and BVOD audience via digital. The program also smashed records for live streaming numbers, in some instances exceeding 10% of the linear TV audience.

The TV Week Logie Awards, celebrating their 60th year from a new home on the Gold Coast, secured a national average audience of 1.151 million.

Nine has long been considered Australia’s most trusted source of news and current affairs. In 2018, our flagship Nine News one-hour bulletin again took top honours, across all seven days, in the country’s two biggest markets, Sydney and Melbourne. In Sydney, Nine News won 39 out of the 40 weeks over all competitors, while in Melbourne it claimed 37 weeks.

A Current Affair,wraps up the 2018 ratings period with a national average audience of 1.075 million viewers per episode.

Today, Australia’s longest running breakfast program, finished the year as champion of the timeslot across the combined East Coast capitals of Sydney, Melbourne and Brisbane.

This year Nine premiered the debut series of Young Sheldon, which immediately cemented itself as Australia’s No .1 comedy program, with a national average audience of 1.179 million viewers per episode.

Michael Healy, Nine Network Director of Television, said: “After a very successful 2017, our schedule this year offered audiences and advertisers greater consistency than any other network. We are proud to have delivered a strong programming slate that entertained and informed, particularly with the demographics we target. Increasingly, our viewers are choosing to watch our content on a device and a time of their choosing, a trend that we embrace and look forward to growing.”

Michael Stephenson, Nine’s Chief Sales Officer, said: “2018 was another great year for Nine. We have again delivered where it matters for marketers: No.1 in the key demographics on the primary channel. When it comes to delivering for advertisers, year in year out, Nine has the most consistent slate of programs, built around franchises like Married at First Sight, The Voice, Australian Ninja Warrior, The Block and Love Island Australia, and this slate will be strengthened in 2019 by the Australian Open.”

In the broadcast video on demand (BVOD) space, in the last six months 9Now had an average monthly audience of 2,380,742 to be ranked No. 1 for free-to-air BVOD TV Network sites.

Generally a good year for Nine despite ratings for The Voice and Australian Ninja Warrior falling from last year.
Nine News still dominating in Sydney and Melbourne (and is neck and neck with Seven News in Brisbane). And the Nine News brand is enhanced further with 9news website one of the most-visited websites in Australia.

The Australian Open should deliver Nine incredible momentum going into 2019 and I expect Married At First Sight to hit new highs and give MKR a far worse watering down than it did this year.

This sounds more positive than what Seven recently said. I thought Seven won EVERYTHING (both primary and overall). But good on Nine if they have the statistics to back it up.

Agree. I think Seven ought to be nervous especially leading up to the new season of MKR.

Nine’s had a very stable year, doesn’t mean changes shouldn’t happen though. The Voice and Ninja are all experiencing massive declines and they will need to do something, either to buck the trend or to do something new (I’d probably even say that if these two shows were as big as MAFS and The Block, Nine could’ve very well become the No.1 network this year). FFF needs to be shunted and axed, and they will need to fill up on their post-8:30 programming if they want a good crack at No.1 next year.

I thought Seven won EVERYTHING (both primary and overall). But good on Nine if they have the statistics to back it up.

Seven claimed they were ‘on track’ to win the demos when they claimed the ratings year before their ‘newfronts’ in October. Wonder whether they didn’t end up doing that or if Nine have spun the numbers in a way so that they can claim the victory

The latest article from TV Tonight reported that Nine’s primary channel won the 25-54 demo. And Seven won ALL demos and total as a whole network. I wish all networks would use the same criteria to avoid comparing apples and oranges. But I think what matters most is which network has the largest advertising share? I don’t think that’s available yet.