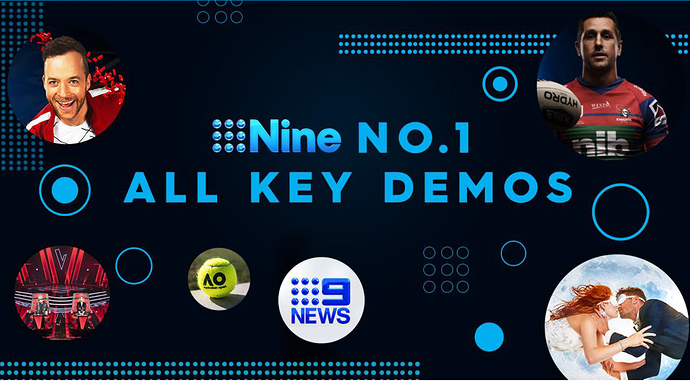 At the half way point of the 2020 OzTAM ratings survey period, Nine is Australia’s undisputed ratings leader.

With Week 20 of the 40-week survey period wrapping overnight, Nine is the No. 1 network with all key demographics and Total People.

The network’s success is driven by a powerhouse schedule of year-round Australian premium content that once again has delivered proven consistency of audience across all advertiser-preferred demographics.

Michael Healy, Director of Television for Nine, said: “In 2020 Nine has consistently delivered the biggest programs on Australian television. Starting with the Australian Open in January and leading into Married at First Sight, LEGO Masters and The Voice, our primetime schedule has been a resounding success with viewers across the country. We thank our highly engaged audience and look forward to continuing to bring them a diverse slate of family viewing content in the months ahead.”

Michael Stephenson, Chief Sales Officer for Nine, said: “Our advertisers want scale and consistency. More people are watching Nine across all screens than anybody else. We deliver advertisers a consistency of audience that you simply can’t get from anyone else. The best part is we still have a blockbuster schedule to come with Australian Ninja Warrior , The Block , Halifax: Retribution and NRL all on air over the coming months. And then we have the NRL Finals series and three State of Origin games which will create an amazing platform for retailers leading into Christmas.”

Nine can lay claim to all ten of the Top Ten highest rating programs on Australian television in 2020.

In a year unlike any other in living memory, viewers have flocked to our news and current affairs programming. 9News boasts an average nightly audience of 1.3 million – up 12% year-on-year.

A Current Affair is appointment viewing for an average of 1 million viewers each weeknight.

Our BVOD (Broadcast Video On Demand) viewing figures also continue to soar, with 9Now recording an average monthly unique audience of 3.988 million and a minutes share of 45%, making it the leading commercial free-to-air streaming platform in the country.

9Now also has the most streamed program across all BVOD platforms, with Married at First Sight accruing a total more than 816 million VOD minutes streamed – almost three times as much its nearest competitor.

9Now also takes out the Top 10 live streamed programs year-to-date with the Australian Open and Married at First Sight . 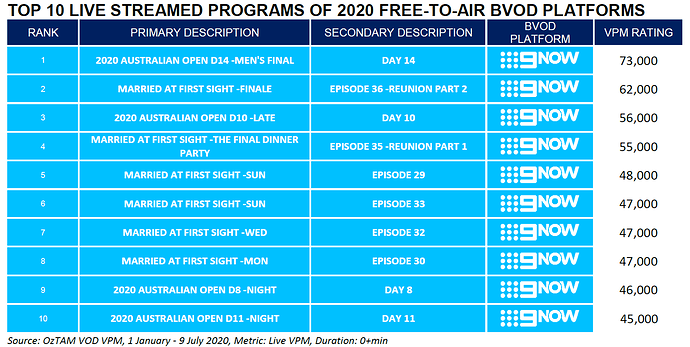 Nine’s ratings dominance is set to continue in the months ahead.

The Voice , now in its ninth season, continues to deliver huge audiences and will reach a peak in the coming week as we head towards its grand finale on Sunday, July 19.

We then showcase the fourth series of Australian Ninja Warrior , which is arguably the most family-friendly program on Australian television.

Our final quarter will see the 16th series of the mother of all reality programs, The Block . The dynamite renovation program sets the benchmark when it comes to delivering for both advertisers and viewers alike.

Also set to air in the coming months is our reboot of a much-loved Australian drama classic,
Halifax: Retribution .

Another half way report; the usual caveat to read the fine print. Nine usually sticks to industry-recognised standards though. Note that much of the reporting is based on +28 days consolidated which might result is some slightly different network shares and rankings.

For those wondering GS + Ch is grocery shopper with child.

Clearly January (out of survey) with the Australian Open, with VPM shares, minutes and the Top 10 rankings (broadcast total people and VPM Live) gave Nine a big boost/inflation that they were definitely not going to leave out as it has entries/mentions in nearly every table/paragraph above.

Calender year data IMO should only be used for “Top programs” at the end of the year, as often the Aus Open has been No. 1 or in the Top 3 / Top 10, etc. OzTam’s official reports and Seven always used to include this too. Otherwise most other tables/data should stick to the official survey.

Example: 9Now YTD share above is only 6% ahead of 7Plus and we know 7Plus have been dominating that metric for months now (surprisingly). Fine print says it includes January, so it’d no doubt be closer (possibly neck and neck) YTD if that was excluded?

When there were paper diaries there actually was a non-survey period. As we know, the ratings are collected every day of the year.

It can’t be denied that 9Now has been dominating the first half of 2020 with Australian Open tennis and MAFS.

9Now also takes out the Top 10 live streamed programs year-to-date with the Australian Open and Married at First Sight .

Bit hard to have anyone else on this list when you’re the only BVOD with live sport!