The Nine Network’s sizzling season of cricket begins next week with the Matador BBQs One-Day Cup featuring the six best State teams, broadcast live and free from Wednesday, October 5, at 2.30pm AEDT on GEM from the WACA in Perth.

Cricket fans will also be able to watch every ball of GEM’s coverage of the top domestic limited overs competition on their phone, tablet or PC with the Cricket Australia LIVE Pass streaming subscription. The website www.cricket.com.au will carry complete highlights of every day’s play so fans won’t miss a moment of the action.

Get Social with Wide World of Sports on Facebook, Twitter and Instagram for the latest scores and commentary, as well as exclusive access to our commentary team and all the behind-the-scenes action throughout the 13-game series. 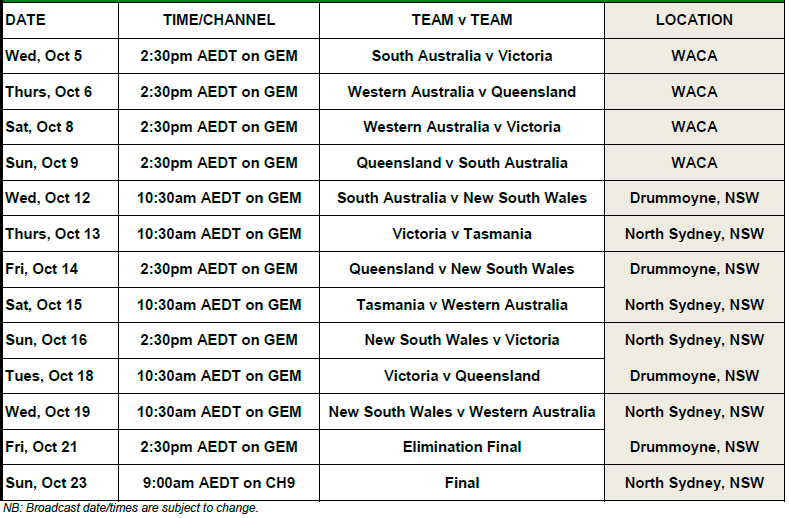 As opposed to? Who was the dopey at Nine that wrote up that press release?

Urgh. Replace them all.

Whoever wrote that also forgot it’s now known as 9GEM, not just GEM. Minor detail maybe, but Nine would want to get its branding right when it comes to publicity.

It’s the 6 States and a Cricket Australia XI which like a Cricket Acadamy team.

Jessica Halloran tweeted this out

Considering that Brad McNamara, the producer of Nine’s cricket coverage who was arguably responsible for the “boys club” feel (if his social media antics were anything to go by) is now gone…

I don’t mind the boys club.

JUST GET RID OF JAMES BRAYSHAW. Bloody hell is his voice annoying.

As opposed to? Who was the dopey at Nine that wrote up that press release?

Urgh. Replace them all.

No cricket for me this summer. Can’t stand 9’s commentary team

No cricket for me this summer. Can’t stand 9’s commentary team

I just mute the commentary and listen to the radio or commentate myself.

Comparing this summer of cricket to last summer, is it so much better with not having the hapless Windies and India (who seem to come here way too often these days). The number 1 test team in Pakistan, South Africa (the last team to win a test match in Australia, back in 2012), finally a Trans-Tasman ODI series (first in many years) and Sri Lanka to round it out in the T20’s looks to be a very enticing line-up.

So when would a final decision on the mix be announced? Doesn’t the first test start in less than a month?

I expect a crappy patch up job where all the old guys are kept around, with a female Nine reporter thrown in the mix.

It’s the 6 States and a Cricket Australia XI which like a Cricket Acadamy team.

Yeah the 6 states, not the 6 best states haha.

9Gem is currently replaying Australia v India Twenty20 match from earlier this year while the Matador Cup match between WA and Victoria is interrupted by rain, but it still has the LIVE AND FREE watermark. Goes to show how inflexible the watermark can be.

I hope nines new head of cricket coverage actually makes some changes! I’ld start with the commentary line up, I am embarrassed that other countries around the world tune into it. Get rid of Brayshaw and Slater would be a start.

I agree with getting rid of James Brayshaw but I don’t mind Slater, it’s just that they like to go off-topic (Warnie a repeat offender) many times.

Warne is probably the most insightful commentator and as a cricket fan, he is in my opinion the best. Slater goes way off topic too much and laughs more than commentates.

Warnie’s a much better commentator in England on Sky.

Yup!! 100% true…and when commentating in India etc
It’s just ch9 that makes them all act like fruitloops and it came from Brad Mcnamara - now that they have gotten rid of him, hopefully we start to see some change!!