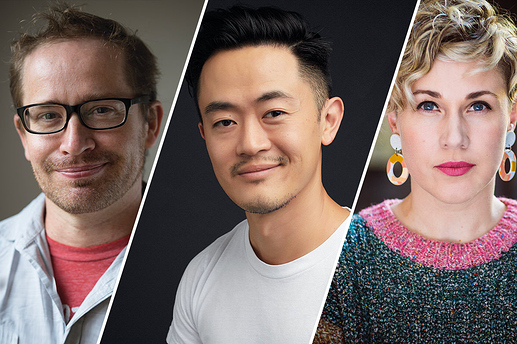 This murder mystery, directed by The Hunting ’s Ana Kokkinos, and produced by Goalpost Television, is the untold true story of the Australian gold rush from the perspective of Chinese miners who risked everything for a chance at unlikely wealth in a strange land.

SBS Director of Television and Online Content, Marshall Heald , said: “SBS thrives on telling stories that explore complex issues and can have meaningful impact. With permission to be bold, original and genre bending – SBS is a leader in original dramas that inform, entertain and, where possible, shift the dial on attitudes. Our recent success with the AACTA-nominated series The Hunting ignited a national discussion while showcasing fresh, diverse local talent, and we’re excited to do that again with New Gold Mountain . We’re thrilled to be working with Goalpost Television on our upcoming drama offering.”

Screen Australia’s Head of Content, Sally Caplan , said: “ New Gold Mountain is set to bring a unique piece of Australian history to our screens, shining a light on the Chinese migrants of the 1850’s whose stories have seldom been told. We’re thrilled to support experienced director Ana Kokkinos, along with the talented team of writers and producers Goalpost Television, on this character-driven thriller that I’m sure will captivate audiences on SBS in 2020.”

Goalpost TV Producer, Kylie du Fresne , said: “Goalpost is thrilled to be partnering with SBS on their first major period series they’ve commissioned. Series creator Peter Cox has vividly brought this world to life. His writing is exceptional. Along with my fellow producers Liam Heyen and Elisa Argenzio, I am also delighted that Peter will be joined on the writing team by Benjamin Law and Yolanda Ramke and the amazing directorial talents of Ana Kokkinos.”

Production on the series commences in 2020 and will be filmed in Victoria. Cast announcements will follow in the coming months. New Gold Mountain is a Goalpost Television production for SBS. Major production investment from Screen Australia, in association with SBS. all3media international is the global partner on the show.

the untold true story of the Australian gold rush from the perspective of Chinese miners who risked everything for a chance at unlikely wealth in a strange land.

Or was it partly told in one of the backstories for one of the characters in Glitch?

New Gold Mountain is the first time we have done a period drama. In the past it has been too expensive for us, but with the help of Screen Australia and All3Media we have managed to make it happen for the first time. It will be great to have Benjamin Law on board as one of the scriptwriters. It is a murder mystery set during the height of the gold rush. It is a crucial part of Australian history that hasn’t been told very often from a multicultural perspective.

Yoson An, Alyssa Sutherland and Christopher James Baker will headline the network’s most ambitious drama series yet, New Gold Mountain. The murder mystery explores the story of the Australian gold rush from the perspective of Chinese miners. #SBS2021 https://t.co/6X98EzQxv2 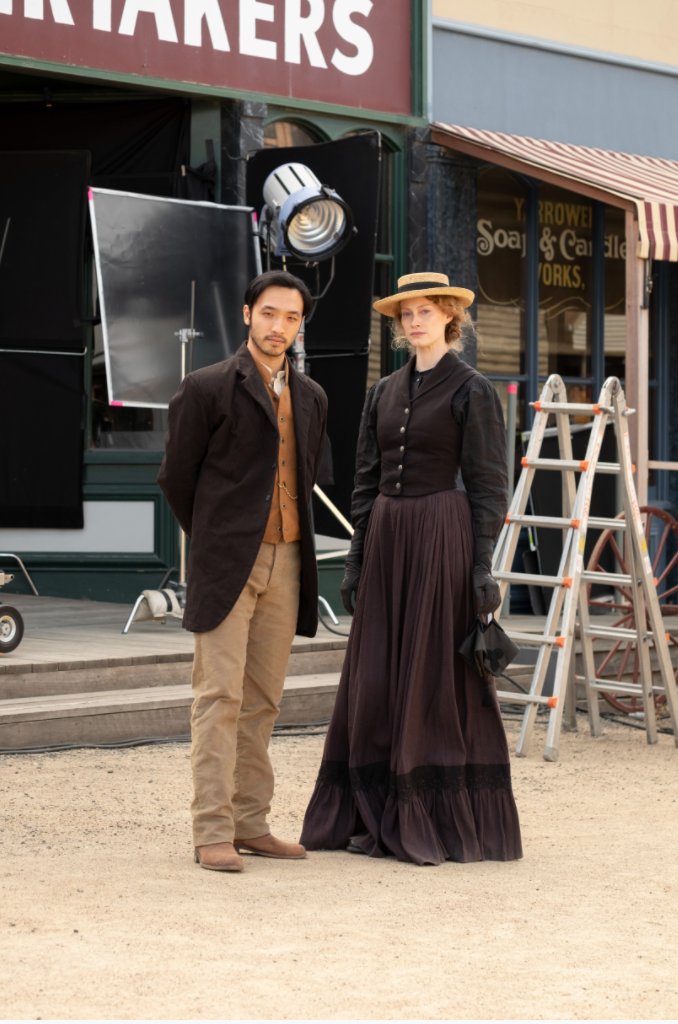 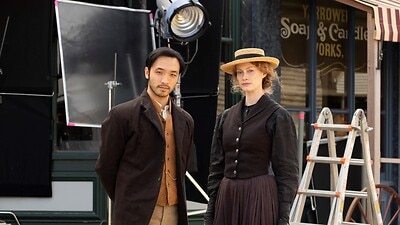 Produced by Goalpost Television for SBS and Directed by Corrie Chen ( Homecoming Queens, Wentworth ), New Gold Mountain tells the untold story of the Australian gold rush from the perspective of Chinese miners who risked everything for a chance at unlikely fortune in a new land. Inspired by real life, the series follows a group of compelling characters brought together by a mysterious murder and takes an unprecedented look into the wild west era of the Australian gold rush.

Key scenes for the series are being filmed at Sovereign Hill in Ballarat with filming also taking place around Melbourne and regional Victoria.

Yoson An said: “I’m incredibly excited to be diving into the intricately diverse world of New Gold Mountain created by Peter Cox. I feel extremely honoured to be working with SBS and Goalpost Television to be playing such a prominent part in this new series. The role of Leung Wei Shing (the headman of the Chinese digging camp) is probably one of the most layered and complex characters I’ve had the opportunity to explore, and I’m very much looking forward to collaborating with our Director, Corrie Chen, in bringing him to life.”

Alyssa Sutherland said: “I’m thrilled to bring Belle to life in what I know will be a gripping and thought-provoking Australian series on SBS, produced by Goalpost Television. Belle is determined to buck tradition in a time that was typically oppressive to women, and is tenacious in her search for the truth. I’m extraordinarily grateful for this opportunity to dig in to a gutsy female character and work with our wonderful Director, Corrie Chen.”

Corrie Chen said: “’The search for belonging’ is one of the oldest stories we tell ourselves, but one that never ceases to feel particularly urgent and captivating. Bold, ruthless, entertaining and darkly humorous, New Gold Mountain is the seminal immigration story that will redefine our perception of frontier Australia. As an immigrant and non-European settler, I am particularly excited to be directing a show that will finally let me put Chinese-Australian cowboys on screen and revising the canon of the classic Western.”

SBS Director of Television and Online Content, Marshall Heald, said: “ New Gold Mountain is our first foray into period drama, and one of our most ambitious projects yet. This daring and intense series is distinctly SBS, showcasing the complex relationships and tensions between the migrant gold miners of the 1850s within the legacy of the Victorian Goldfields.

“SBS continues to push boundaries with our local slate of dramas, and we’re proud to tell stories otherwise untold and give a voice to diverse communities otherwise unheard. We are thrilled to be creating this bold drama with the team at Goalpost Television and an incredibly talented cast with a wealth of experience.”

Kylie du Fresne, Goalpost Television, said: “When SBS expressed an interest in doing their first period show about the Goldrush, at Goalpost Television we were beyond thrilled; it’s a period of Australian history that was screaming to be told. Who wouldn’t want to do a revisionist western set in the 1850s? The world Peter Cox has created is extraordinary and under Corrie Chen’s skilful and visionary direction, I think this is going to be a series that really stands out in the world.”

Sally Caplan, Head of Content at Screen Australia, said: “We’re so pleased to see this premium drama go into production in Victoria. In the very capable hands of Director Corrie Chen, New Gold Mountain is set to be a gripping series that showcases a unique piece of Australia’s history and I’m confident it will captivate viewers on SBS next year.”

Film Victoria CEO, Caroline Pitcher, said: “Understanding our history from all perspectives is important in connecting with our past and each other, and we’re excited that SBS and Goalpost Television have put this story in the hands of talented Victorian Director, Corrie Chen. There is also nothing like recreating a story in the place in which it happened and I can’t wait to see Victoria’s gold-boom towns and sweeping regional landscapes shine on screen.”

Head of Screen NSW, Grainne Brunsdon, said: “Screen NSW is committed to supporting NSW talent and amplifying diverse stories that strengthen and reflect our communities. I am thrilled SBS and Goalpost Television will be working with a high calibre of talent from NSW and across the country to bring this important Chinese-Australian story to life for the first time.”

Maartje Horchner, EVP Content, all3media International, said: “We are so pleased to be working with Goalpost Television on New Gold Mountain . The show reflects a fascinating time in Australia’s diverse history, illuminating stories of Chinese immigration and the gold rush period with contemporary and timely resonance. The narrative thrust is an intriguing murder mystery, which ensures mainstream appeal. As a result, we are confident the show will be attractive to international audiences.”

New Gold Mountain is created and written by Peter Cox ( The Insider’s Guide to Happiness ) and produced by Kylie du Fresne ( The Invisible Man ) and Elisa Argenzio ( Lambs of God ). Writers include Yolanda Ramke (Director of The Haunting of Bly Manor ), Benjamin Law ( The Family Law ), Greg Waters ( Riot ), and Pip Karmel ( Total Control) . Creatives Jean Tong , Olivia Cheung and Samantha Kwang are being supported by Film Victoria to undertake industry placements on the production. The series is executive produced by Amanda Duthie (SBS).

New Gold Mountain will premiere on SBS and SBS On Demand in 2021.