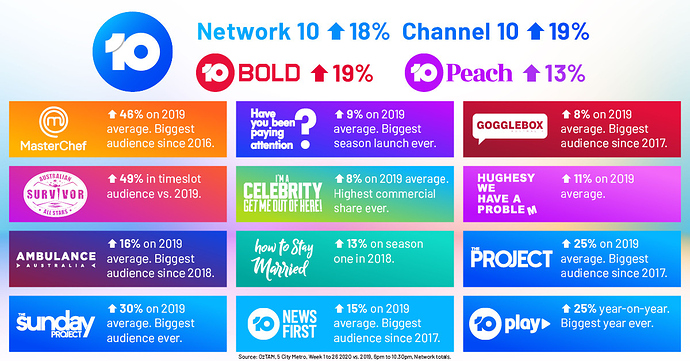 Network 10 has achieved its biggest first half commercial shares in nine years, capturing a bigger share of total viewers and viewers aged under 50 and in the key demographics of 25 to 54s, 16 to 39s and 18 to 49s since 2011.

Network 10 and Channel 10 experienced the biggest growth across the first half of any network or channel in Australia year-on-year.

Network 10 continued its audience growth story from the second half of 2019 and has achieved 10 consecutive months of year-on-year commercial share growth.

The growth in the first half of 2020 is attributed to strong performances across 10’s prime time schedule including:

Chief content officer and EVP of ViacomCBS Australia and New Zealand Beverley McGarvey said: “We are continuing to grow strongly. Our 50 weeks of general entertainment programming strategy this year is paying off. It began in the very first week of 2020 with the launch of I’m A Celebrity…Get Me Out Of Here! on 5 January, a week earlier than 2019. This season saw an improved performance on 2019’s successful season, cementing its place as a premium entertainment option for audiences over January.

“The success of our refreshed first quarter this year continued the success and momentum we had at the end of 2019, with Australian Survivor: All Stars , Ambulance Australia, Gogglebox Australia and Dancing With The Stars all collectively lifting 10’s timeslot audiences this year.

“In March, like the rest of the world, we had to navigate the challenges of a global pandemic and adapt our production methodologies to ensure we could overcome the specific issues we faced as a news, production and entertainment business. Therefore, it was especially encouraging to see Australians turn to 10 to be informed and entertained with 10 News First , The Project and MasterChef Australia: Back To Win attracting big audiences.

“The strong performances continued with Have You Been Paying Attention? , which launched to its biggest season premiere audience ever. And, Australian scripted shows The Secrets She Keeps and How To Stay Married performed brilliantly,” she said.

“We have seen some incredible competition in this first half across the commercial free-to-air TV networks, which is great news for the overall TV landscape. The competition is set to heat up when we launch our fourth channel later this year. The channel will strengthen our under 50s programming and boost our network share.”

Network 10’s digital audiences are also surging this year with 10 Play having its biggest year ever, up 25% year-on-year. The growth can be attributed to additional exclusive content being added to the platform, but also record broadcast video on- demand (BVOD) audiences for 10 shows.

So far this year, the following shows have achieved their biggest BVOD audiences ever:

Beverley continued: “The success of our shows this year meant strong digital audiences on our digital platforms too, with 10 Play recording its biggest year so far. The great thing about this result is that it also reflects the additional investment in exclusive content we have made on the platform. We will continue to look for opportunities to boost our digital proposition for audiences.”

year has truly been remarkable. It’s clear – audiences are switching to 10.

“The success of our programming has also been reflected in our revenue. Since October 2019, Network 10 has seen eight consecutive months of year-on-year revenue share growth. When you look at BVOD, our average revenue growth over the last 10 months exceeds 40%, the biggest of any network.

“In 2020, we are delivering consistent, brand-safe and highly integratable environments for advertisers across all our platforms,” he said.

“We are also continuing to strengthen our commercial proposition with the addition of MTV, Nickelodeon – the #1 kids brand – and Nick Jr. to our brand portfolio, all of which have seen audience growth since March 2020. The new MTV music channels which go live on 1 July will also expand our offering into the music genre.

“In addition, over the last few months, we have supercharged the opportunities available for advertisers with the launch of Effect, a premium, integrated marketing solutions business, a dedicated direct and independent agency team and a whole new digital experience including a Premium Pause product on 10 Play, a non- intrusive, high-impact way for brands to integrate online.

“There is so much more to come as we reap the benefits of the ViacomCBS integration in Australia and New Zealand. We can’t wait to have you all along for the ride,” Rod said

There is still more great content to come in 2020 including Bachelor In Paradise , The Bachelor Australia , The Bachelorette Australia , The Masked Singer , Junior MasterChef , Gogglebox Australia , Drunk History Australia , Bondi Rescue, The Living Room, the Melbourne Cup Carnival , the Bathurst 1000 , the MotoGP World Championship , Wallabies Tests including the Bledisloe Cup, plus more Have You Been Paying Attention? , The Sunday Project, The Project and the crowning of the 2020 winner of MasterChef Australia: Back to Win .

Some of Network 10’s first half 2020 highlights include:

10 Speaks turns up the volume:

At 26 weeks we are at the half way point of the year. The info above is all provided by 10, so consider the fine print - though it is good to have that provided so we can see the bases for claims made. Nice to also have included programs from the other networks in the top 10 tables.

BTW this was posted as a “news” article to make it easier to comply with OzTAM rules.

It was nice to see 10 doing well, especially in the 2nd quarter. After a solid start to 2020, Masterchef returned. The audience numbers were around 900k-1.1million. They were able to win in terms of young demographics. A few weeks later HYBPA returned. Channel 10 are starting to improve in terms of prime time shares. In the 2nd half, they will have a big lineup of shows liked masked singer, Junior masterchef, Bachelor in paradise, Bachelor, Bachelorette.

There is a distinct energy and freshness to the network

I still see nights of 7-11% shares for channel 10 when they don’t have a big tentpole, which shows that 6-730 still somewhat struggles Ten’s Beverley McGarvey and Rod Prosser on H1: ‘We are very confident that we...