With Peter’s seal of approval 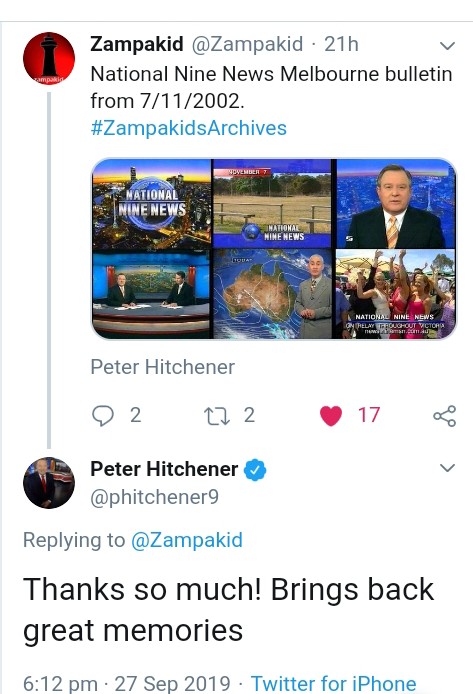 Does GTV still use that “On relay throughout Victoria” line at the end? I like it.

Nope.
Wouldn’t make sense anyway given that they aren’t on relay throughout Victoria anymore

Fair point. Did they use it until Nine News Regional came in in was it 2017?

), I can never recall seeing it used in recent times - that cap is honestly the first time I have seen it.

they aren’t on relay throughout Victoria anymore

Well, technically they still are on weekends (and I guess Christmas Day, if that counts)!

Either then or with the 2004 relaunch would be my guess. Wonder if the “This has been a National Nine News Presentation” voiceover was axed at the same time.

From the clips I’ve seen, the Melbourne edition of National Nine News seemed to have the more unique presentational style of the three main network O&O stations until relatively recent history. For example, I think GTV still used their Opener super to display the date as recently as 2010-11 while TCN/QTQ used it for a brief description of the headline?

Yeap, they included the date until the 2012 relaunch. And currently, they use a bit more of the theme at the start of the opener and I’m pretty sure they still use those ‘outdated’ fonts that no one else uses for the OTS graphics.

Nine News Melbourne were a dominant force at this time. I believe they averaged a 200k lead some nights over seven.

I remember the AGE reporting rumours that seven were contemplating axing it’s local weekend news presented by Jennifer Adams. I believe Jo Hall’s bulletin was the most watched local news bulletin in the country.

Seven recruited new management in 2003, which lead to a change in direction.

Nine News Melbourne were a dominant force at this time. I believe they averaged a 200k lead some nights over seven.

And when Nine had the rights to Friday night and Sunday afternoon AFL, the Melbourne bulletin often had a lead of over 500k on Sundays with the AFL lead-in.

I believe Ten News even rated higher than Seven News in Melbourne during this period?

Just goes to show how much of a joke Seven News was in that market (and Sydney for that matter) back then. 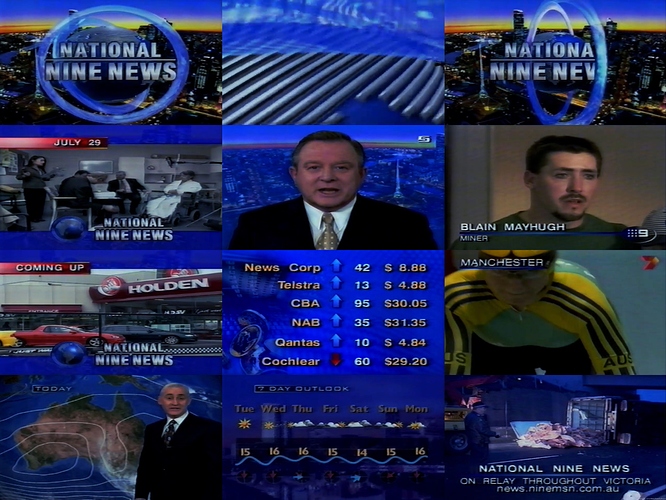