Michael Usher’s new crime investigation series ‘Murder Uncovered’ is coming to Seven after the Tennis according to a promo on 7newssydney twitter tonight. 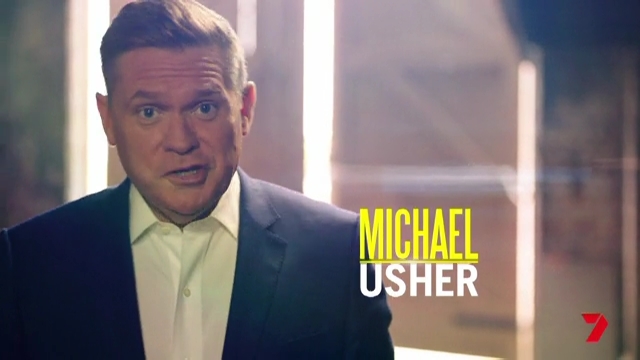 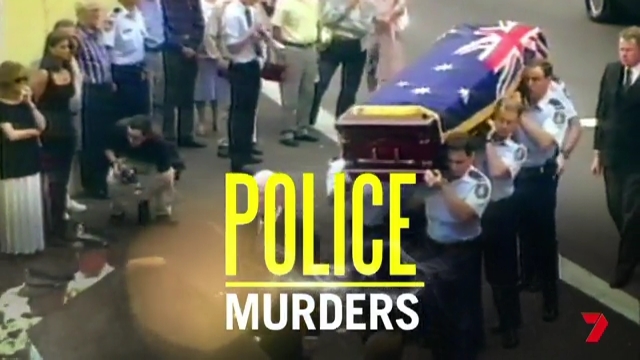 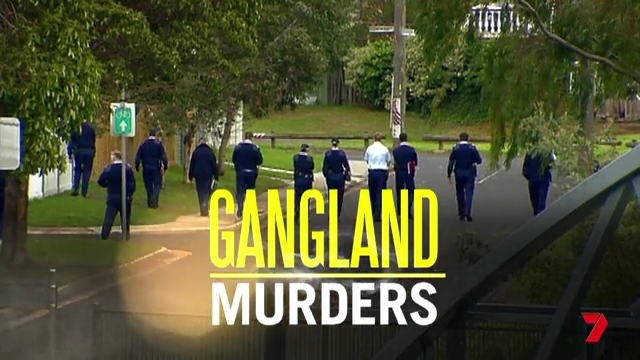 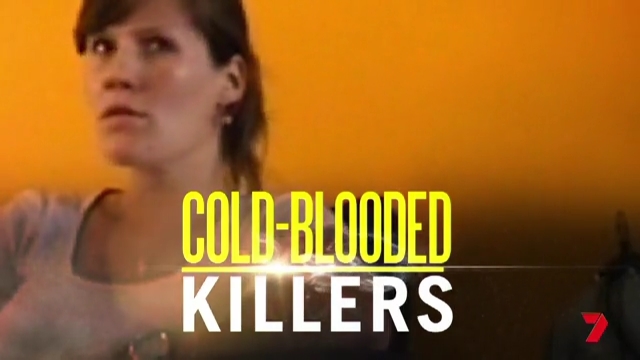 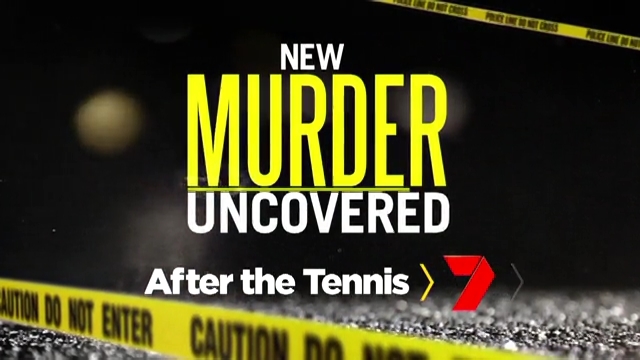 Just when you thought you knew it all… The breakthrough investigative series that will blow wide open some of the worst, most infamous cases of killings and crimes in Australian criminal history.

Most crime shows just report what happens - This program will do more than that. It will re-write history.

Why are Australian networks so intent on using such large fonts? Use something that complements the imagery being shown and let that do the talking, don’t hide it behind big ugly text.

Why are we being inundated with real crime shows this year. Yuck!

Why are we being inundated with real crime shows this year. Yuck!

48 hours, Dateline NBC, Investigation Discovery (whole network). These shows do massive figures in US and cheap to make.

On Australian networks using huge fonts - I noticed this when I was in Australia for Xmas. Every font was so damn huge (for promos) and network logos too. Huge. Everyone has large TVs. It looked so wrong and awkward. You don’t see this in the US. things are more refined

From Wednesday 8 Feb at 9pm

Groundbreaking. Powerful. Gripping. Murder Uncovered is a breakthrough investigative series that will blow wide open some of the worst, most infamous cases of killings and crimes in Australian criminal history.

Featuring award-winning journalist Michael Usher, each episode will examine a different case that enraged and engaged the country, presenting new evidence, major breakthroughs and fresh leads that will have you questioning everything.

Kate Moir was just 17 when she became the fifth victim of Australia’s worst serial killer couple, David and Catherine Birnie. Kate was snatched a knife point from the street by the Birnie’s, a cruel and calculating couple who prowled the suburbs looking for young women to abduct, torture and kill.

Now for the first time, Kate tells her remarkable story of how she dramatically escaped from the Birnie’s spree of evil and death. Only her bravery, tenacity and will to live saved her and saved the lives of more young women who most certainly would have become victims as well.

Despite enduring a terrifying ordeal and believing she was going to be killed, Kate somehow kept a level head and managed a miraculous escape. Within hours the Birnie’s were arrested. And it would take a crack team of investigators to break them.

You will hear their firsthand accounts of how they convinced the couple to confess as chilling new details are uncovered from never-before-given interviews with the detectives who investigated at the time.

Catherine Birnie’s own son breaks his silence revealing what it was like to be raised by a serial killer and his wish for his murderous mother.

And, the shocking revelation that could have seen the Birnie’s get away with their crimes.

From the team that made the critically-acclaimed Anita Cobby documentary and In Cold Blood… The Chris Lane Story, Murder Uncovered will dramatically revitalise the crime genre.

Just when you thought you knew it all…

Didn’t like the first 10 minutes but enjoyed the rest.

I enjoyed Murder Uncovered last night, a lot more gripping, chilling and compelling than I had imagined.

They were unarmed and off duty. Two police officers out for a couple of beers to welcome a new young recruit to their inner city police station.

But as the three leave the hotel they are confronted by a young man offering to sell them drugs. They detain him to check his ID when the 18 year old pulls a knife.

Desperate to avoid arrest, Murray Hearne stabs Constable Peter Forsyth twice in the heart, and his colleague Jason Semple twice in the stomach. Peter is killed carrying out his sworn oath as a police officer, just metres from his home where his wife and two young children slept. Jason is left for dead but miraculously survives the senseless attack. Hearne and his three cowardly mates flee the scene, sparking a massive manhunt.

Murder Uncovered takes you inside the police investigation as senior detectives pull out all stops to catch the cop killer. Using every available police resource, they finally track Hearne down. He’s arrested at his girlfriend’s flat after hours on the phone making a chilling confession to a newspaper reporter in the hope of convincing that he had acted in self-defence.

For the first time you will hear from the arresting police officers, paramedics, Constable Forsyth’s children and the killer himself. And the courage of his widow as she confronts the man who killed him, hear the stunning promise she forced him to give.

For the first time you will see secret surveillance tapes, the moments before the slaying, the dramatic manhunt, the arrest. What we’ve uncovered brings Australia’s toughest police officers to tears.

And for the very first time how a father turns on his own son when he thought he was going to get away with murder.

Jason Semple went on to a stellar career as a police officer but the father of two still has to fight his demons as he recalls how a quiet night with mates changed his life forever.

Hearne served his time behind bars and is now back in the community, free and living the life he took from others with his wife and child. He struck up a relationship in the most unlikely of places, entangled in a prison affair. See his reaction as we ask him for his side of the story.

Murder Uncovered is a breakthrough investigative crime series that will blow wide open some of the worst, most infamous cases of killings and crimes in Australian criminal history.

Featuring award-winning journalist Michael Usher, each episode will examine a different case that enraged and engaged the country, presenting new evidence, major breakthroughs and fresh leads that will have you questioning everything.

Just when you thought you knew it all…

Fascinating subject matter. High production values. Re-creations. Forest night shoots. Drone shots. And yet a couple of journalistic oversights brought the overall program down.
1/ The unknown superiors who told the policewoman to veto Kate’s story. What happened to those people? Was there any repercussions? No mention.
2/ Kate gives an amazing account. Yet the journalist does not ask her once how she has coped all these years and what impact did it have on her life. Was she able to go on and have normal relationships? She seems to have it all together now, but what about as a young woman? It should have been the first question following the description of her harrowing experiences. It’s a two hour program for God’s sake.

Also the policewoman should have been interviewed separately about her version and then together with Kate. The two of them together came off as quite awkward when Kate jumped in a few times.
Surely if that amount of money is spent on a program some more probing and intelligent questions should be asked. These type of programs are becoming more concerned with the crime rather than the bigger picture. A visual feast but not an intellectual one.

I hope this aspect improves, as it let down an otherwise excellent production.

I saw US Bureau Chief Mike Amor in the promo

Why do they even bother having Michael Usher?

Who did the interviews last week?

Mike Amor was the journo/producer on the cop killer episode and it shows. His experience and interviewing technique far surpassed the journo from the first week. Top notch job Mike. He asked the tough questions without crossing into the disrespectful territory. A tough line to navigate. It’s truly disgusting that you can murder someone, a policemen and almost murder a second and only get 16 years. The justice system is a joke in this country. i think it’s even more soft now than 20 years ago. A slap in the face for victims and their families.
As for the show, I think making the Gangland Wars the third episode is a big mistake. This story has been covered to death. Honestly, who cares about a bunch of scumbags killing each other? No sympathy, hence no interest. I’ll be avoiding this one. The producers should be focusing on more personal stories, some of which the public may not know. Some people might be interested, but I think most know enough about this already. It’s a bad call.

Mark Llewelyn was surprisingly the interviewer for the Birnie’s episode.

This week’s edition of Murder Uncovered, Two Weddings and 29 Funerals, scheduled to air on Wednesday night has been withdrawn for legal reasons and will be rescheduled for a later date.

An edition of Bride and Prejudice will screen on Wednesday at 9pm on Seven.

So does that mean they’ve run out of episodes already? Shouldn’t have wasted them in doubles.

A “cynic” might ask if this was a way to move the show away from Nine’s Murder Calls (but only a cynic).