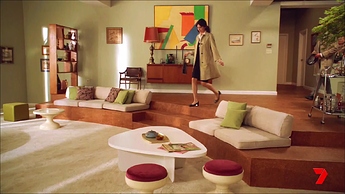 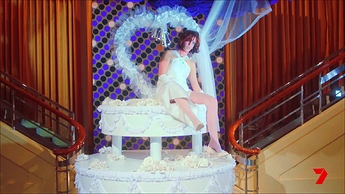 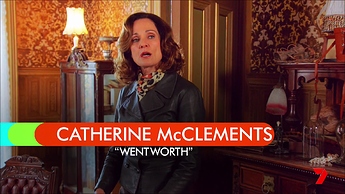 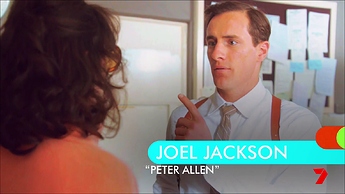 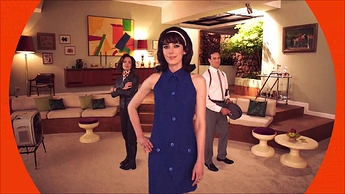 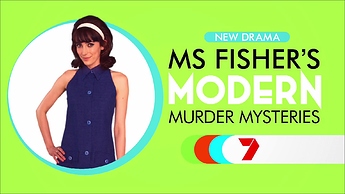 I think it looks great but not really sure this is a Seven Network type show. Hope it works.

Good to see them something new though, still better than rehashes.

Is it new though? It’s a spin-off of Miss Fisher’s Murder Mysteries. It follows the same premise.

For the Seven audience. For starters, if I was a typical Seven viewer I would watch this rather than the reboot of Australia’s Got Talent.

Similarly, if I was a typical Channel Nine viewer, I would prefer to watch something like Seachange rather than reboots like 20 to One. 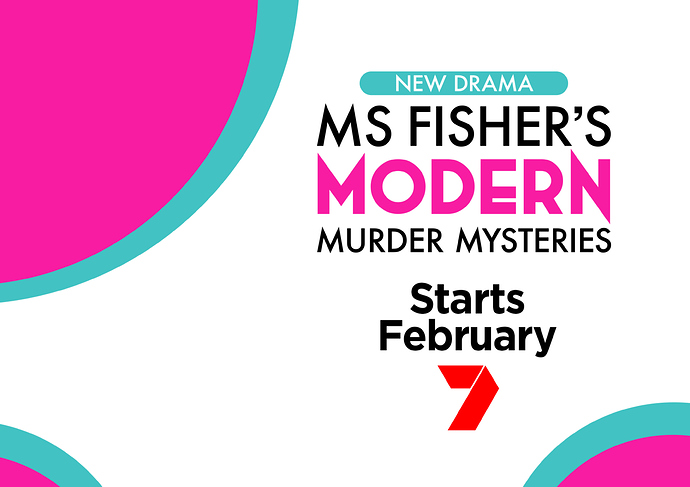 Inspired by their international hit television series Miss Fisher’s Murder Mysteries , based on Kerry Greenwood’s best-selling Phryne Fisher mystery books, creators Deb Cox and Fiona Eagger were keen to delve deeper into the murder mystery genre and determined to have another woman as action hero in the lead.

The success of the Miss Fisher brand and the clamour of passionate fans encouraged them to consider various sequels and prequels to the original series. But when they landed on a concept, set in the Sixties, that had a long- lost niece from an illegitimate relationship take on the lady detective mantle, they knew they were onto an idea that would make their young heroine a worthy heir to The Honourable Phryne Fisher.

“The original series was set in 1929 following the First World War at a time of liberation for women. With men away at war or killed, women were coming into their own and stepping into roles that men had traditionally taken. We felt the 1960s were a similarly great time,” says Deb Cox.

Fiona continues: “They were joining the workforce. There was a sexual liberation going on. The contraceptive pill came out. There was a tremendous sense of optimism. We landed on 1964 as the music’s fabulous, the fashion’s great, there are wonderful cars, but there’s also huge social change about to happen.”

Phryne’s long-lost niece Peregrine Fisher, played by Geraldine Hakewill, shares many of her aunt’s attributes. She’s brave, courageous and driven by a strong social conscience – and has both a fabulous wardrobe and sparkling wit to match!

“Peregrine is an impulsive, joyful, compassionate, loyal, crazy girl from a caravan park in Perth. She’s very reckless, witty and funny, but also unsure about how she fits into the world,” says Geraldine.

Audiences will see a wild and rough-hewn girl grow into a woman of immense charm and accomplishment, who nevertheless never loses her ‘devil may care’ attitude to the world.

In the same way that the original series was a fantasy, a wish fulfillment in which the lead character inherited a great fortune and the lifestyle to match, it was important to give Peregrine the kind of grit that the original Miss Fisher had because she wasn’t born into wealth.

“Peregrine was raised by a single mum and she has had a difficult life. She was essentially responsible for her mother so she has a lot of survival skills but has never honed or polished them in the way that Phryne had. She is gifted in the same kind of genetic way that Phryne was but much more of a rough diamond when we first meet her,” Deb says. 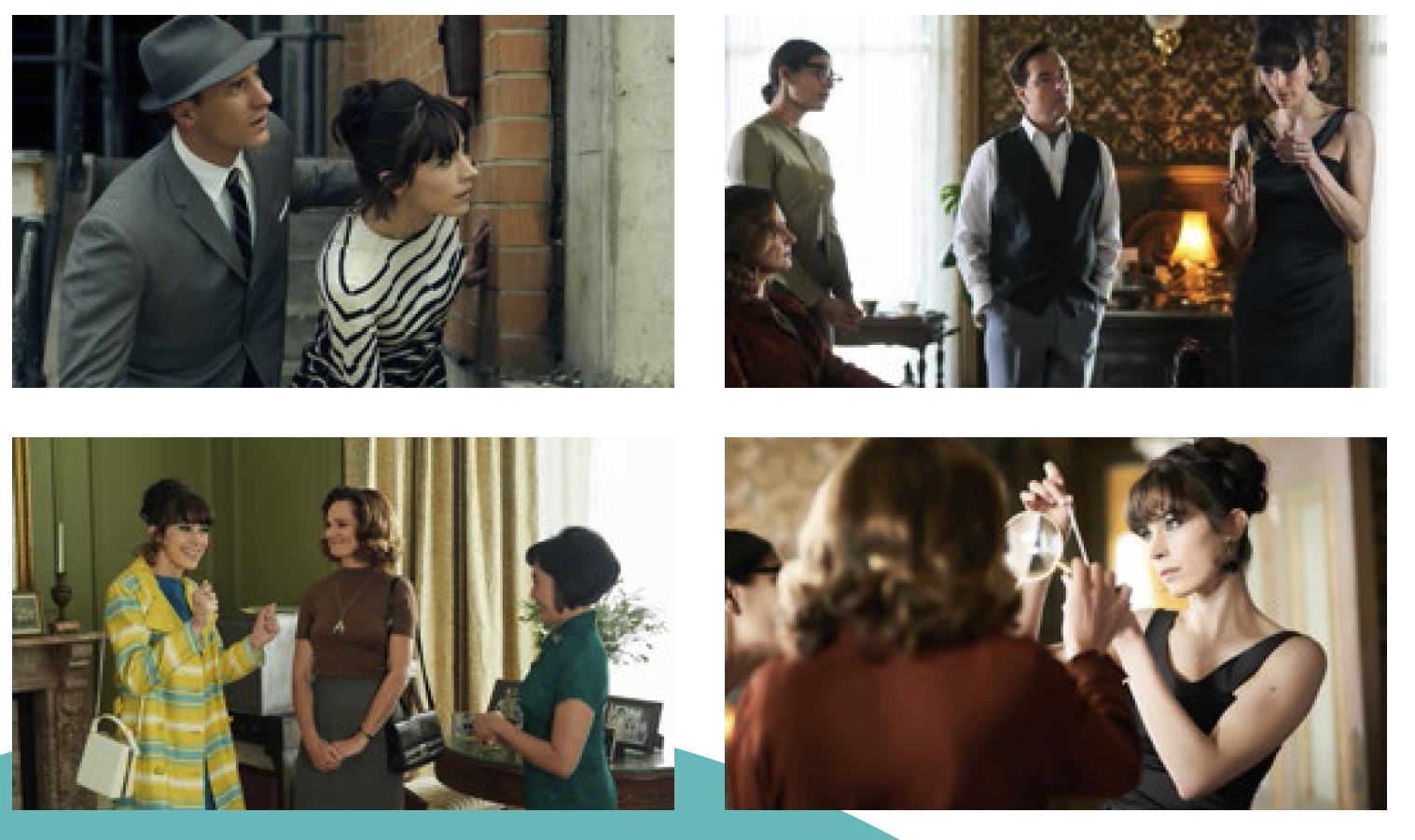 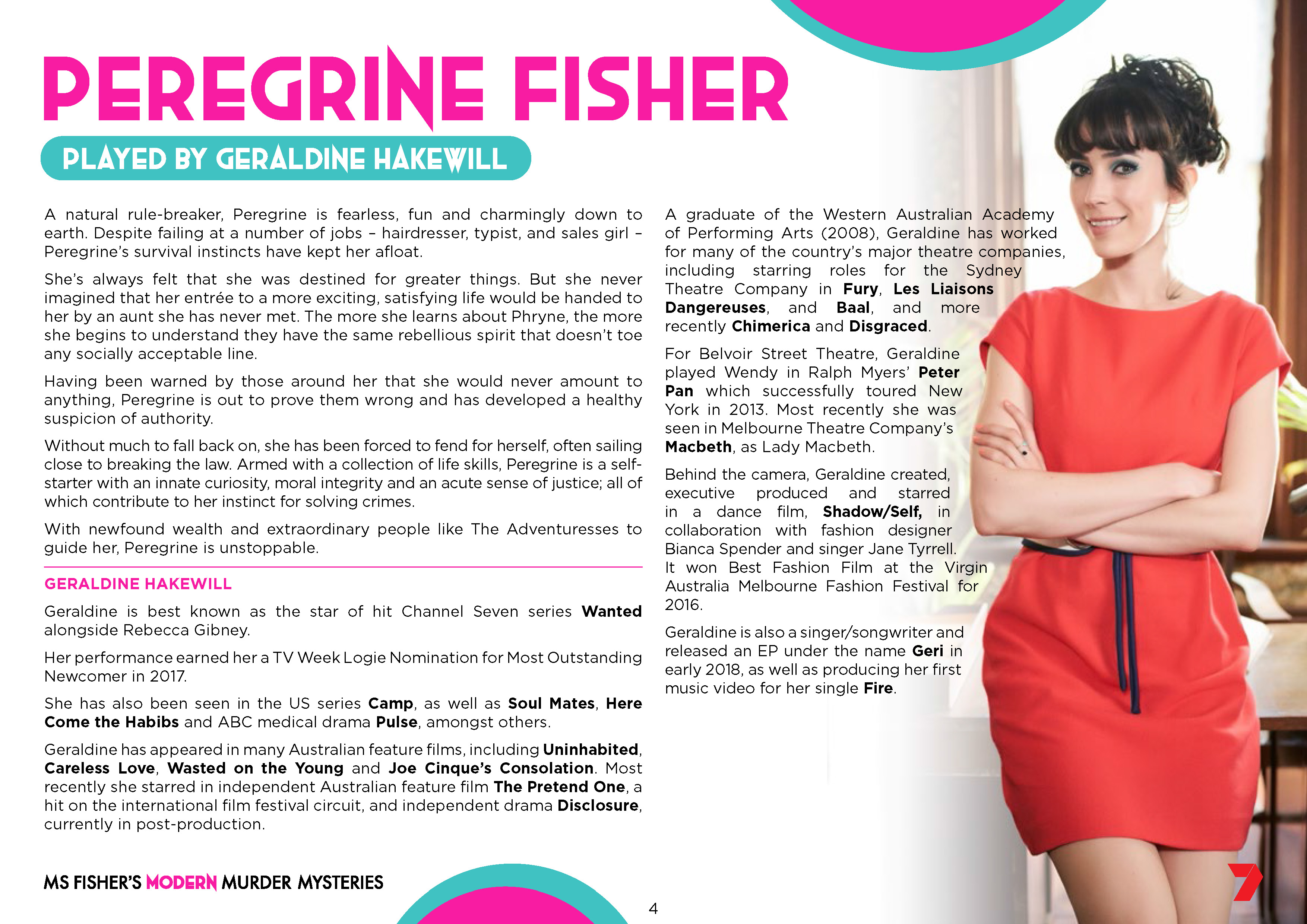 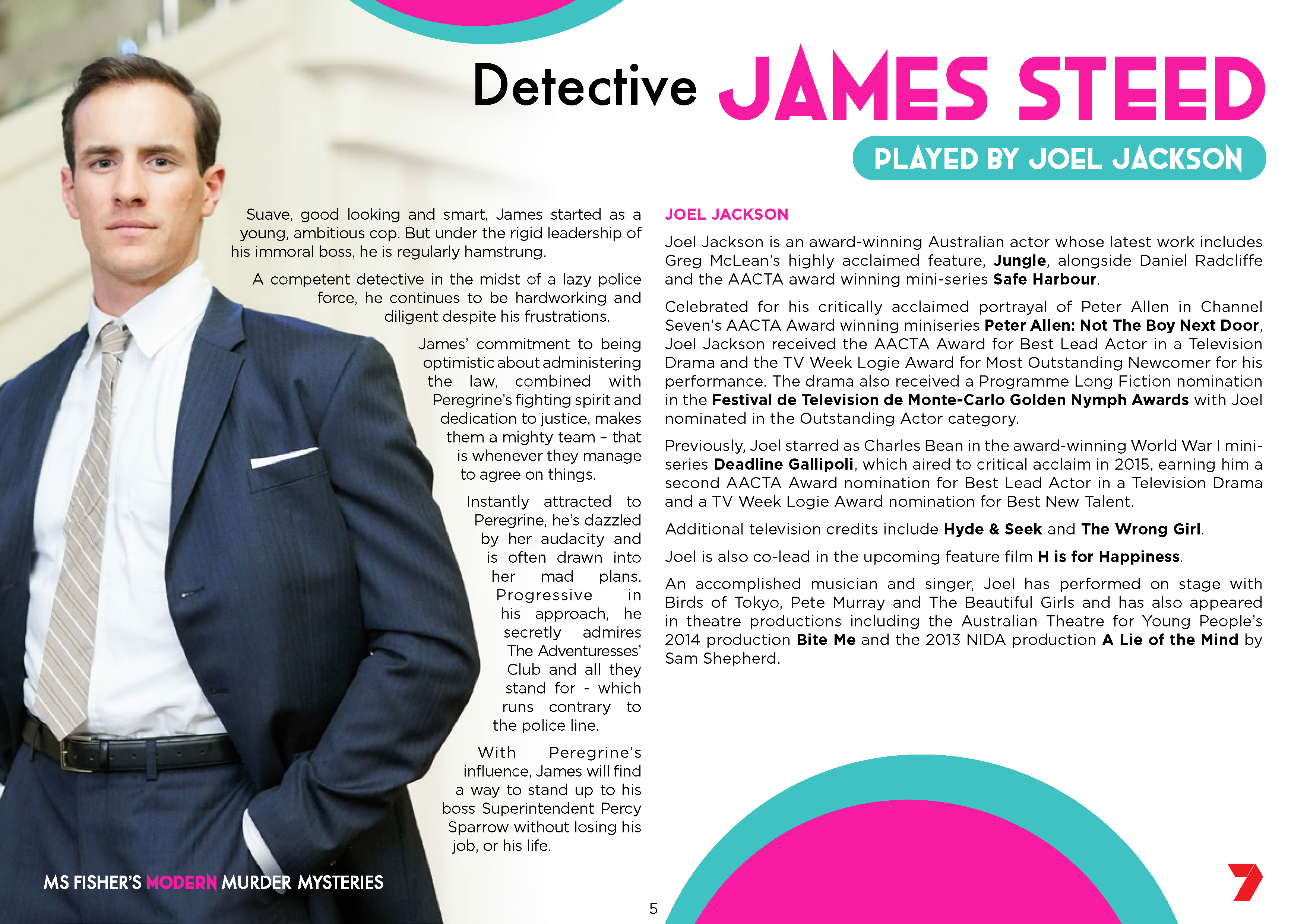 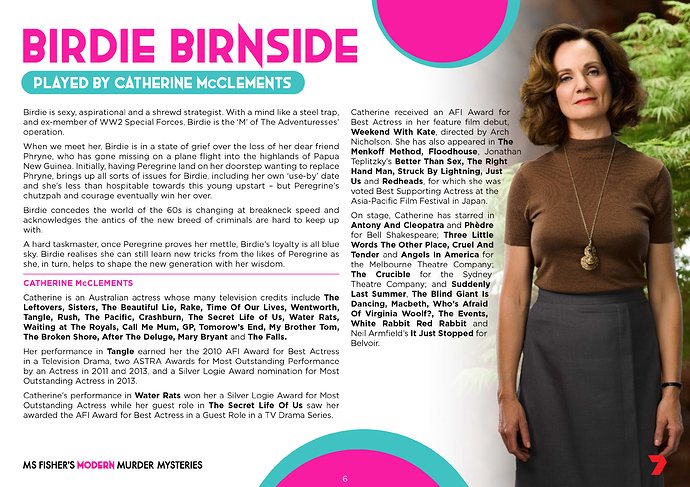 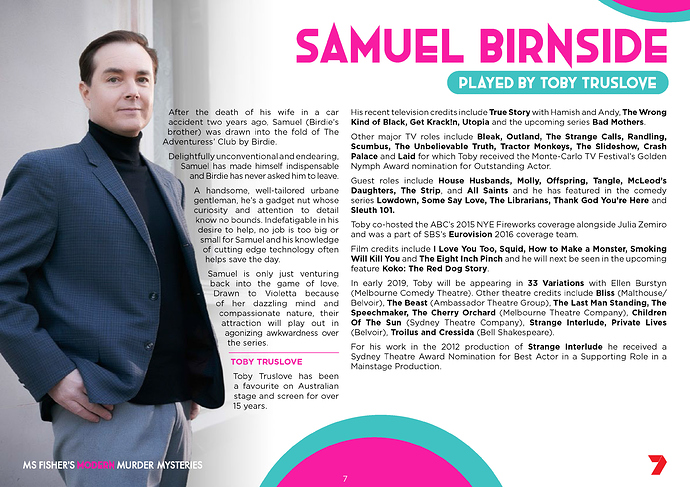 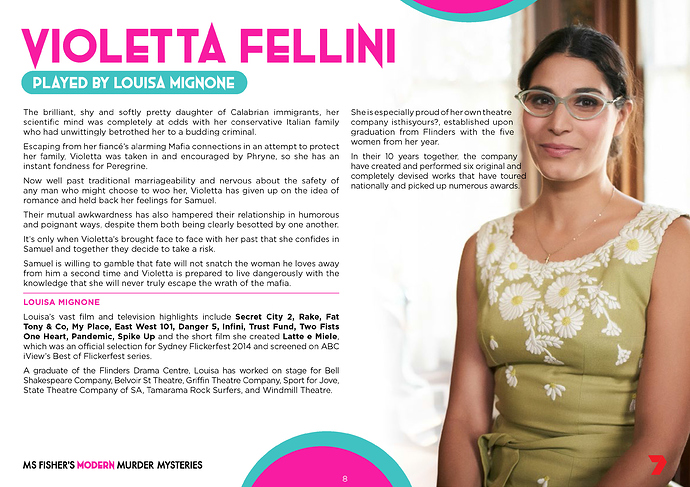 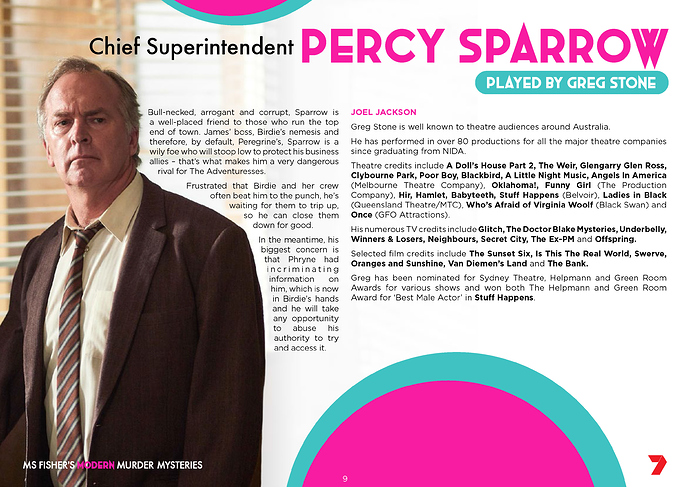 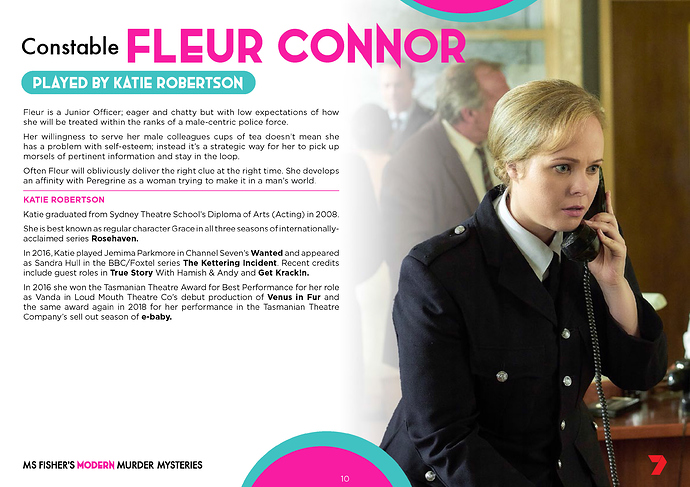 From what I can tell, the series consists of 4 x 2-hour episodes.

They need to screen at 8.30pm or forget about it.

The latest premiere date possible is Friday February 22 if Seven is to air all four episodes before the AFL premiership season starts on March 21.

I thought they might make it a Sunday night show.

Yes. It should be on Sunday or Monday at 8:30pm, or they shouldn’t have bothered making it. The Blake Mysteries never had a chance on a Friday night.

I can’t see a space for it. Better to hold until MAFS ends and launch off the back of House Rules perhaps.

. It should be on Sunday or Monday at 8:30pm, or they shouldn’t have bothered making it. The Blake Mysteries never had a chance on a Friday night 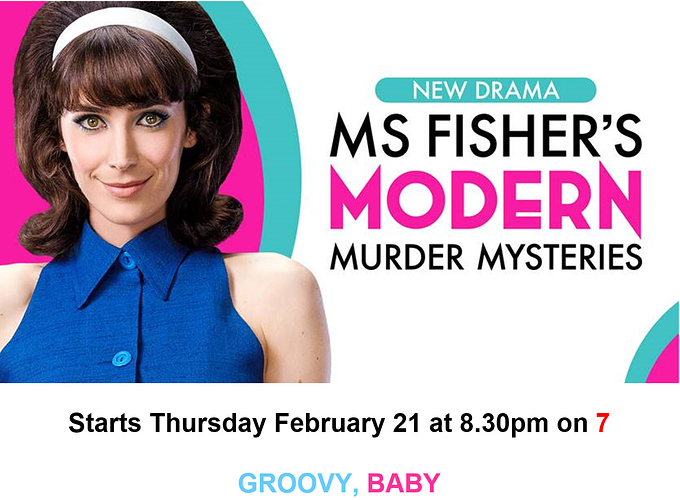 Terrible timeslot. Gogglebox will slaughter it.

I agree. It will be DOA. Can’t see an audience for movie length episodes- too many ads - for a flimsy premise.