Nine would be happy with the start to the Australian Open, though probably thinking about what might have been had Djokovic been able to play. Otherwise a healthy +600k start. It compares to last year’s opening night that started the second week in February with 486k and 2020 that had 633k. Melbourne was a key market for the tennis.

Also competitive was I’m A Celebrity that topped the entertainment offerings, also with +600k watching. A big lift in early evening viewing for 10 with 10 News recording its highest audience since August 2021 and the 6pm segment making the top 20. The Project then had its best numbers since November.

Not much on Seven except a good result for the 6pm news with wins in three markets and over one million at 6pm. Very high numbers for Nine though in Melbourne.

For ABC, Back Roads and China Century were stead while ABC News and 7.30 improved week-on-week.

Is Nine coding the Night Sessions as: “Night” and “Night Session 2”? Is this replacing the “Tennis Night - Late”?

Huge increases for Nine Melbourne’s news numbers, likely with the AO and other viewers tuning in for their nightly news. Kind of ruined the “Peter Mitchell returns” promos…

I also note Seven News Sydney didn’t do too bad, winning for the first half hour, then overtaken by Nine at 6:30.

Is Nine coding the Night Sessions as: “Night” and “Night Session 2”? Is this replacing the “Tennis Night - Late”?

No - there is another coding for Late. So they are splitting the night into more than one part. Makes comparisons difficult.

As expect, Seven falls into a heap without the Tests and the BBL being a dud. The next two weeks are going to be painful for them with those pitiful below 15% main channel shares.

No wonder why they’re so keen to get rid of the BBL that Worner wanted so desperately.

10 News recording its highest audience since August 2021 and the 6pm segment making the top 20.

Noticeable lift, particularly with no news competition from Nine in Adelaide and Perth this week. With Nine News low in Perth, 10 holds up comparatively well in the 6-7 hour for that market too.

I’m A Celebrity… Get Me Out Of Here! Monday:

I’ve noticed they don’t advertise/promote their second channel coverage very well. They should have an on-screen pop-up every now and then that says, e.g “Millman v Tsitsipas now starting live on 9GEM”

No wonder why they’re so keen to get rid of the BBL that Worner wanted so desperately.

It would have worked, but Worner missed the fine print it would be simulcasted on Fox… exclusive people, exclusive!!

This seems to happen regularly with sporting events covered on two channels, the primary channel has huge figures, and the secondary pales.
For some reason the viewing public doesn’t seem to realise there’s alternate coverage.

It would have worked, but Worner missed the fine print it would be simulcasted on Fox… exclusive people, exclusive!!

I doubt it - Cricket Australia was blinded by the extra cash they could make out of expanding the BBL that they killed their ‘golden goose’ in the process.

The interest in the competition isn’t anywhere near what it was in its ‘heyday’. As such, they’re going to struggle convincing networks to pay top dollar for those rights when the next rights tender process occurs in a few years time.

For some reason the viewing public doesn’t seem to realise there’s alternate coverage.

Nine doesn’t do a good job promoting/pointing people towards the alternate coverage on 9Gem + the individual court streams on 9Now & Stan Sport.

For some reason the viewing public doesn’t seem to realise there’s alternate coverage.

Don’t realise or are quite happy watching the main channel?

Not sure, but I’ve noticed it consistently across sporting broadcasts for a while, wasn’t referring to the tennis in particular, this is just the most recent example.

Wouldn’t be surprised if we see exactly the same thing in a few weeks for the Olympics, even though to Seven’s credit, they do promote their multichannel sports coverage better than Nine.

Cricket Australia was blinded by the extra cash they could make out of expanding the BBL that they killed their ‘golden goose’ in the process.

Totally agree, as we said at the time of the rights deal happening, cricket Australia will kill the golden goose with more BBL games and Fox needed Cricket, while cricket didn’t need Fox.

On the second point about Nine/GEM etc yes Nine don’t promote GEM as best they could but last night most Australians would Barty over a non Australian game on GEM.

It might be different tonight, but Worlds and Australias best player will always draw a bigger crowd, even if that was on GEM. 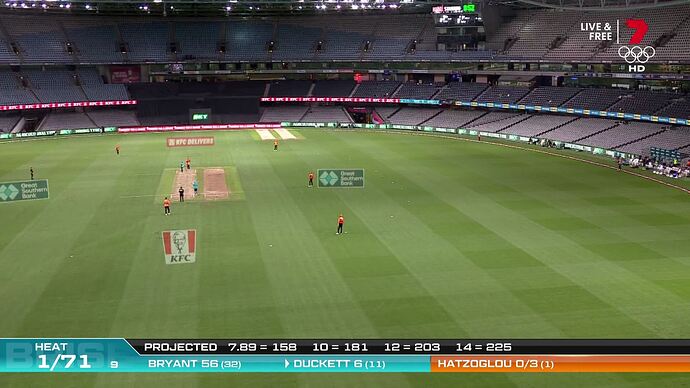 Given it was a Brisbane Heat home game, it would have attracted a decent crowd if it was held at The Gabba. However it was not possible given the Heat only played Melbourne Stars the night before.