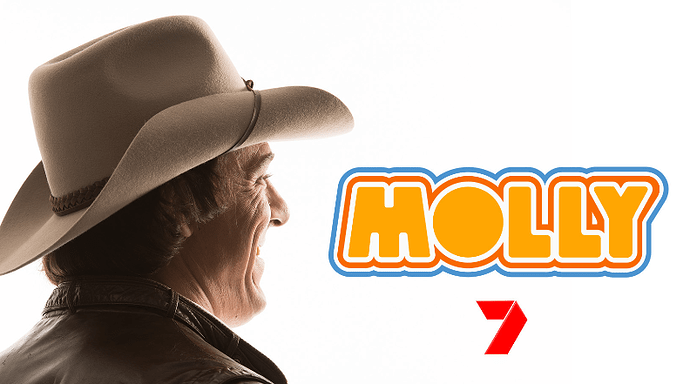 This two-part television event is charts the rise of one of its most internationally influential and powerful names - Ian “Molly” Meldrum. Molly is a Mushroom Pictures production in association with the Seven Network, Screen Australia and Film Victoria.

An inarticulate country boy who hates attention, Molly becomes an unlikely Aussie treasure – the international power broker of pop, embraced by fans and rock royalty alike. But along with the success and his own rising star, Molly’s deep- seated desire is to be loved for who he really is in the midst of his colourful life and friendships.

It’s the 1970s and Australia’s music scene is burgeoning. Passionate music journalist Molly, Producer Michael Shrimpton and Director Robbie Weekes launch an unassuming TV music show called Countdown. It’s an instant success, and becomes a groundbreaking phenomenon with a reputation worldwide as the single TV program that can make or break any recording artist or group.

Australia’s biggest local talent appear on the show – many see a surge in music sales and breakthrough hits. Countdown promotes international acts including KISS, Madonna and Elton John, breaking new artists and songs along the way – thanks to its host Molly who can spot music superstars before they are legends, often becoming their confi in the process.

But what Molly doesn’t bet on is his own star potential. And while he indulges in the wild parties and glitz of his fame, Molly is most happy with his friends.

And when Molly suffers a near fatal accident in 2011, tributes pour in. Molly’s passion for music and life is cemented in the heart of the entire nation. 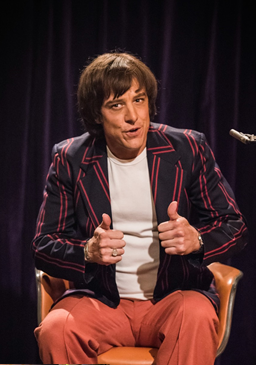 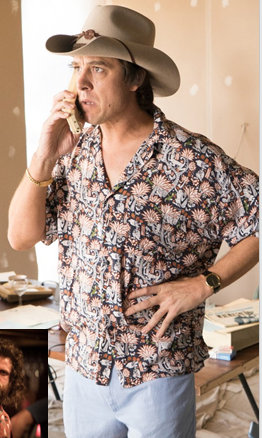 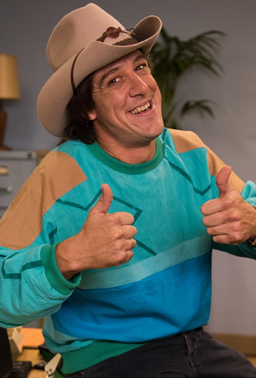 “There is no one else quite like Molly, and I say that with much admiration. To be able to explore the story of his early life and share that with our viewers is wonderful. He is a much-loved icon in Australia.”
Brad Lyons, Seven’s Director of Network Production.

I was interested to see that the soundtrack to the miniseries is the top selling Aussie album for this week and has been in the ARIA charts for six weeks, way before the show has even screened.

I can’t wait for this,should be a great mini-series,I’ll probably record it and watch it later.

The miniseries premieres Sunday February 7 at 8.30pm according to a promo just aired. Can’t wait.

When it comes to the intertwined fates of Molly Meldrum and Channel Seven, it seems one man’s crash is another man’s treasure.

…there’s something a little distasteful in the way Seven is treating Molly’s bad turn as a good one, making hay with a closed loop of publicity thinly veiled as news, none of which fails to mention the forthcoming TV show.

Who saw part 1 last night? I watched it and thought it was well made. Samuel Johnson was certainly in his elements as Molly. Ben Gerrard (who plays Molly’s friend Caroline) and Rebecca Breeds (Camille) are also excellent.
There were many flashbacks similar to Peter Allen: Not the Boy Next Door last year.

There were many flashbacks similar to Peter Allen: Not the Boy Next Door last year.

I watched it and thought it was well made. Samuel Johnson was certainly in his elements as Molly.

I enjoyed it and thought the performances were great. I didn’t mind the flashbacks at all, but I thought there were too many scenes on the operating theatre table, spliced in there. I think one at the start and one towards the end would have been enough.

I really enjoyed this. I was 50/50 on whether I was going to watch it at first so at the start I just had it on in the background whilst I did some housework, but I got completely hooked by the end of it. I’m really looking forward to the next episode now.

It was fun & well made. However, it was really just one,long,nostalgic caricature. It glossed over anything insightful & told us nothing about Molly that we didn’t already know.

The soundtrack album is number one on the album chart.

According to The Sunday Telegraph, Seven will show a follow up documentary, Molly: The Real Thing, next Sunday night.

I caught up with part one today on Plus 7 ,really enjoyed it,Samuel Johnson is very good as Molly

Samuel’s performance as Molly is fantastic the guy really deserves to win awards for this performance.

Shirl’s Neighbourhood … my favourite when I was a kid… loved Claude the Crow and his used bandaid and toe nail clipping collection!

There were some great cameos: Jacinta Stapleton as Madonna, Ed Kavalee as Gavin Wood, Andy Lee, and Mick Molloy as a kangaroo on Shirl’s Neighbourhood!
They even returned to Ripponlea for the scenes at the ABC.
Really enjoyed this episode.

Was really great. And who doesn’t love Molly. But I find myself with many unanswered questions. Questions I don’t even know what they are though lol

Nothing about his Hey Hey days?

But yes simply amazing performance. Stand up and take a bow Samuel Johnson!