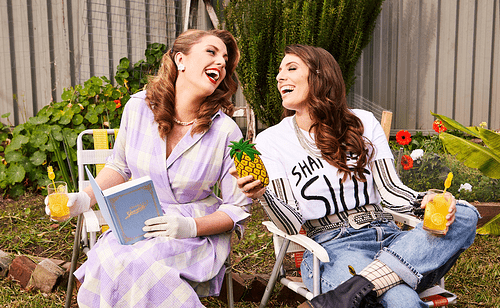 In this six-part docu-comedy series, twenty-something sisters Hannah and Eliza Reilly set out to road-test advice for women from the past and the present.

After rediscovering the 1950s teen-advice book Growing Up Gracefully, the Reilly Girls take on the six key milestones of growing up: Looking Your Best, Courtship, Sex, Making Friends, Career, and Spirituality, navigating social rules of a bygone era with those of the present.

Hannah the reckless party girl, adopts the ladies’ etiquette of the past, and in the process, is grilled by ‘Deportment Queen’ June Dally Watkins, reforms into a 1950s medicated housewife for a day and brings her mother along on a first date. While dorky home body Eliza, following the advice for women dished up by the internet, learns how to get the perfect ‘booty shot’ from an Instagram model, gets Botox to preserve her youth and aligns her chakras at a new age women’s spirituality retreat.

It’s the rules for women of the 1950’s versus the rules of 2017, Donna Reed versus Lena Dunham. And as good musical theatre nerds Hannah and Eliza wrap up each show with a big musical finale.

As the creators / writers / directors / sisters, the Reillys offer a uniquely millennial perspective. They have surrounded themselves with a team of amazing ladies, including Marieke Hardy as script supervisor and Series Producer Nikita Agzarian. There are actually so many women in the team, their periods have all synced, and together they are now unstoppable.

“We’re following more advice than you can daintily poke a stick at,” Hannah and Eliza said, “all to learn how to grow up gracefully, whatever the f*ck that means.”

While co-hosting their community FBi radio show ‘Girls Gone Mild’ one Saturday morning, they got a phone call from Julian Morrow of ‘The Chaser’, and have been writing and developing with production company Giant Dwarf ever since. Hannah also currently hosts triple j’s sex and relationships program ‘The Hook Up’.