ABC and Screen Australia are delighted to announce the commission of the illuminating new ABC art series Great Southern Landscapes. 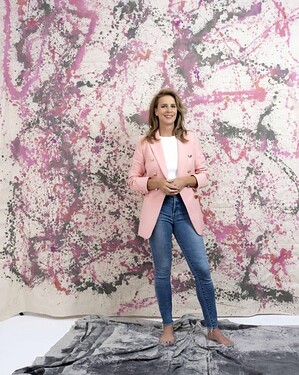 After the tremendous success of last year’s Finding the Archibald , art lover Rachel Griffiths has once again teamed up with Mint Pictures to present this new 6x30mins ABC prime-time series.

This time, Rachel trades famous Australian portraits for iconic landscapes in an entertaining fusion of art, social history, and travel. Packing up her boots and backpack, she heads off across Australia’s states and territories to find the exact spot where some of our most famous artists placed their easel to capture their interpretation of our iconic landscapes as we explore not just how much our landscapes have changed but how we see them too. Along the way she meets Australians from all walks of life who will help unlock the hidden secrets of the works and the untold personal, social, and cultural stories behind them.

Series presenter Rachel Griffiths, who is also an executive producer of the show, said: “I’ll be taking ABC’s viewers on a fun, factual, at times surprising and very visual adventure from our beaches to our rivers, across our plains and lakes, up our mountains and down our valleys looking for the very spot where some of our most iconic paintings were made.

“How many times have we feasted our eyes on a Nolan or an Olsen, marvelled at a Namatjira or been awed by a Clarice Beckett? But rarely, if ever, have we actually set foot on the spot where the artist stood. Rarely have we gazed at the very vista they were inspired by. That’s what’s so exciting about my mission in this series.”

Jennifer Collins, ABC Head of Factual and Culture said: “Finding the Archibald” was one of the ABC’s most successful series of 2021, and to have Rachel Griffiths return this year with her idea for Great Southern Landscapes is thrilling. ABC is the home for quality Arts programming and to have an offering like this in the heart of the schedule, in prime-time, is so exciting.”

Alex West, Head of Documentary, Screen Australia said: “It’s fantastic to see Rachel Griffiths, director Ariel White, and producer Dan Goldberg once again teaming up following the success of Finding the Archibald, this time with director Daniel King, to bring Great Southern Landscapes to life. As the name suggests, audiences should prepare themselves for a visually stunning documentary that promises to be absorbing regardless of whether you’re an art fanatic or not. Screen Australia is proud to continue to support documentaries filled with such passion and ambition.”

Great Southern Landscapes will come to ABC TV and ABC iview later in 2022.