Grant Broadcasters (not sold to ARN)

That K Rock logo is the worst logo I’ve ever seen.

The word ROCK needs to be more visible.

Then again, B-Rock have a similar problem.

It’s not like the K means much either, though given KROQ’s continued decline I suppose it’s fitting to still be hanging on to the name.

I certainly hope free of trying to be a part of the wider Grant network they can do something about the positioning of the Geelong stations, maybe they can use this kind of opportunity for a fresh start.

They had that opportunity anyway with K-Rock, could have used Power 100’s log.

Krock is 3CAT they should do something around that 95.5 The Cat. I believe was the original name before they went with Krock last minute.

K Rock around 15 years ago was one of the best stations to listen to. It was broadly Rock with a mix of other music - much broader than Triple M. The format change about 2010 was terrible in my opinion. Following that came the logo change. The old logo was fantastic and suited their image and their location. The new logo is terrible.

K Rock around 15 years ago was one of the best stations to listen to.

Agree. I remember listening in 2009/2010 a lot and thought it was a solid regional station. The music wasn’t too much inline with the main commercial stations but wasn’t too alternative either. It was many years ago but wasn’t BayFM an easy listening style back then too?

With these remaining stations owned by ‘Grants’. What will happen? Will they seek a buyer or will the family hold on to them as well as the JVs?

It was many years ago but wasn’t BayFM an easy listening style back then too?

When Bay FM commenced back in 1989 the slogan was Bay FM rocks the 90s. They were more modern than K-Rock who had just converted from 3GL and were still a little bit on the daggy side. I think there were different owners back then and there was competition between the two. Bay FM at that stage played predominantly modern music probably similarly to 3XY in the mid 80s. When they purchased 3XY, 3XY were a little bit softer than Bay FM at that time. It was around 1991 when Bay FM adopted the softer style and K-Rock became more of a rock station.

K-Rock still pretending they are a rock station supporting the Foo Fighters. Should be Bay 93.9 on the poster alongside Triple M

I’d keep all stations well away from the event which is nothing more than a pre election campaign sweetener to fool an easily led population who have been subjected to some of, if not the most protracted and punitive covid restrictions in the free world.

I think there were different owners back then and there was competition between the two.

At the time, 3GL/K-Rock was owned by Hoyts Media (Triple M) and there was a period when K-Rock and 3MMM simulcasted in the evenings. Hoyts Media sold the station to Grant in the early 90s.

Bay FM was a licence issued after a beauty parade of 9 applicants to the ABT. The successful applicant was GLFM Pty Ltd (named as a blocker to FM conversion of 3GL) which was 52% owned by Ridley Corporation (a local salt producer), 10% by 3CV and 38% by other Geelong investors. GLFM bough 3XY for $900k and then simulcast 3XY and Bay FM until instructed otherwise. When GLFM went into liquidation in 1991, the liquidator could not sell the BayFM licence due to a legislative requirement that prohibited licence transfers within two years of issue. The path to Grant’s ownership included the Geelong Independent and ACE along the way.

Fascinating info, thanks for sharing that. I particularly like the idea of blocking 3GL from the ‘GLFM’ name, that’s great. In a way I like to think it may have led to the birth of one of the great (and unique) regional radio stations in K-Rock as a result.

Do you remember exactly when Grant finally took ownership of Bay? I recall maybe mid-90s? There were some disparaging references made at the time about them merging to become ‘Bay-Rock’.

Sad also to note that 3XY wasn’t even worth a paltry $1m when it sold despite it being THE station of the 70s/80s in Melbourne.

I think AWA got the licence for even less… around $500,000 but all it really got was a commercial AM frequency. It essentially had to build the replacement station 3EE from scratch.

Do you remember exactly when Grant finally took ownership of Bay? I recall maybe mid-90s? 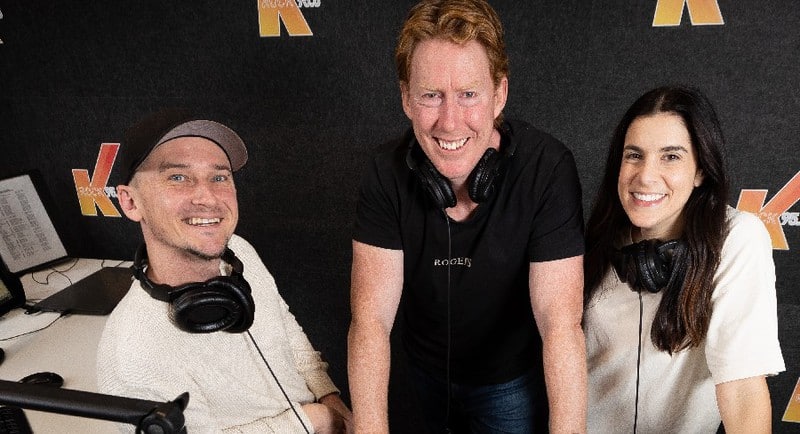 Cameron (Lingy) Ling is set to join the K rock Breakfast team on a permanent basis kicking off Monday May 2nd. Former Geelong player and 3GL commentator Bruce Peake has sadly died at the age of 85. Recruited from Eaglehawk, he played 25 games for the Cats ... As local as it gets

…just happens to be in the Grand Final.

Welcome to Geelong – where the teams at Bay 93.9 and K Rock are abuzz with nervous excitement as the Cats prepare to do battle with the Swans on the hallowed MCG turf this Saturday.

They will start from Monday 17th October, coming in from doing breakfast for Hit across Regional Victoria. Tim Bolch and Jess Pantou have spent almost 7 years as breakfast duo in a variety of markets around Australia...