I enjoyed the Dogs Behaving Baldly segment with the very prophetic “Maybe channel Seven is running out of cash” including the Goggleboxers dogs misbehaving as badly as the ones in the program. 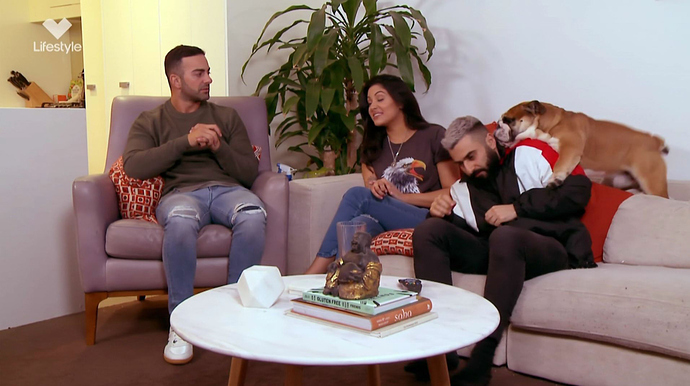 Potentially unpopular opinion: I actually thought this week’s episode was a bit weak. The observations about The Block were spot on, but that’s about it.

Reviewing The Bachelor again? Boring! And surely it would’ve been far more interesting to see the households react to news coverage of the Sydney CBD stabbing (which will likely end up being one of the biggest Australian news stories of 2019 by a considerable margin) instead of the latest offensive thing said by Alan Jones?

I notice they’re letting a lot of F-bombs get through the edit now. Which I’m not complaining about sometimes it makes things funnier to use it.

The Asian woman and man, don’t seem to add much to the show.

Wrong in fact they do esp in the Facebook group

It’s now time to see how another Media Spy prediction of a program review turned out.

I think it will be reviewed on Gogglebox next week, if not this week.

If Twitter is anything to go by, Australia’s most famous TV viewers were indeed watching Old Peoples Home for 4 Year Olds last night.

As far as I can tell, they were also watching (and probably absolutely roasting) The Proposal on Seven!

Yes on both counts.

Also, the narration was brilliant tonight too - getting very sassy! Especially with the old lady at one stage.

If Twitter is anything to go by, Australia’s most famous TV viewers were indeed watching Old Peoples Home for 4 Year Olds last night.

Not sure about everyone else, but personally I thought this week’s episode of Gogglebox was much better than last week’s.

The review of Old People’s Home for 4 Year Olds was an early season highlight, while I can definitely understand why only about 300k or so viewers watched The Proposal!

It’s boring watching them review The Bachelor/ Survivor / The Block etc every week.

Hopefully the trend of “one good episode, one bad episode” isn’t going to continue.

Skimmed through the recording tonight and thought this week’s was a dud, Aussie Survivor and The Bachelor again?! I suppose the Better Homes & Gardens review was alright (Adam’s singing of the “Harry’s Practice” theme tune suggests that he either knows his TV history or at least catches the reruns on 7TWO!

) but that’s about it really.

It’s boring watching them review The Bachelor/ Survivor / The Block etc every week.

Yeah I haven’t watched for a few seasons. They need to start doing Netflix / streaming content. That’s what most people are watching these days.

I don’t see the pattern. I preferred this week’s episode to the previous week (when there was yet another random ‘giving birth’ show for no particular reason). The Survivor and Bachelor reviews were hilarious as was the Stonehenge doco and the Netflix series review. 60 Minutes made a nice change as well and for once they reviewed a recently released movie in Bohemian Rhapsody rather than a 20 year old ‘classic’. Overall, a good balance.

Each to their own, but personally I think the best Gogglebox reviews so far this season have been of programs that they’ve watched for the very first time (it’s probably for these titles where the reactions have been the most natural/least rehearsed) or have only seen occasionally before.

Reviews of the reality franchises are fine once or twice a season (premiere week and season finale week, something like that), but The Bachelor being there in almost every episode so far this season has been far too much IMO. It’s not as if this franchise or MAFS doesn’t already get a tonne of discussion in the media and online without Australia’s most well known TV viewers adding to it!

Will they make it to the Masked Singer and Bachelorette before the season is over? Also they could have watched Les Norton, Glitch, Bluey.

This week’s episode will be dominated by the finales of Australian Survivor and The Bachelor, as well as the debut of The Masked Singer. It will be interesting to see the reactions of Goggleboxers as they watched the episodes, especially their guesses on who was behind the mask in The Masked Singer.

This would only work if they all watched it live or were given advanced copies.

Whether this week or next, it’s inevitable that the Goggleboxers will review the premiere of The Masked Singer.

I’m sure the finales of Survivor and The Bachelor will also get a look-in, but what will be far more interesting to see is how Gogglebox handles former couch reviewer Angie Kent being 2019’s Bachelorette in a couple of weeks. Will the households get to watch The Bachelorette this year or will the “We don’t want our households to become celebrities (even though being on national TV they’d no doubt get recognised on the street, etc.)” factor rule?

I think they’ve already broken that ‘rule’ when Yvie was shown in the jungle this year.

That’s true, but The Bachelorette is pretty much going to be entirely centred around Angie unlike I’m A Celebrity, Get Me Out Of Here which was centred around multiple celebrities (well, more like “people you’ve vaguely heard of in the media” in many cases).