There’s a crisis in Australia. More than 100,000 people have no place to call home*.

With the gap between the haves and the have-nots widening, and house and rent prices sky-rocketing – homelessness is a frightening possibility for more of us than ever before.

In Filthy Rich and Homeless – a bold social experiment airing over three nights on SBS, produced by the award-winning Blackfella Films (First Contact, DNA Nation, Deep Water: The Real Story) – five wealthy volunteers will get a glimpse of what life is like without a home.

The five have agreed to swap their privileged lifestyles for 10 days and nights living on the streets of Melbourne. Their preconceptions about homeless people will be shattered as they find out what it’s like to go from having everything to having next-to-nothing.

Leading the five participants on this social experiment is celebrated journalist and passionate advocate for the issue Indira Naidoo, and homelessness expert Dr Catherine Robinson.

With their phones, ID and money taken from them, the five participants will each be given second hand clothing, a sleeping bag – and nothing else.
For an eye-opening and life-changing 10 days and nights, the group will be separated and each will experience life alone on the streets, in boarding houses, crisis accommodation and squats.

They will meet people who have no home to turn to, gaining a greater understanding of the varied and complex reasons for how they came to be without a home and hearing their heartbreaking stories of survival against the odds.

SBS Director of TV and Online Content, Marshall Heald said: “Filthy Rich and Homeless is confronting, heartbreaking, and at times incredibly heart-warming as it shines a light on a part of our society often overlooked and ignored. By helping to make the invisible visible, the series aims to spark a national conversation around much-needed change for Australia’s significant homeless population.”

Filthy Rich and Homeless is produced by Blackfella Films for SBS in association with Screen Australia and with assistance from Film Victoria. It is based on a format created by Love Productions, broadcast by the BBC in the UK and distributed by BBC Worldwide.

Socialite Skye Leckie does it tough in SBS homelessness docuseries

They wanted her for Real Housewives of Sydney but instead the wife of former Seven boss David Leckie signed up for something rather different.

Season 3 announced at SBS Upfronts for 2020.

TV Week reports that Andrew Rochford has signed on to experience it in 2020. 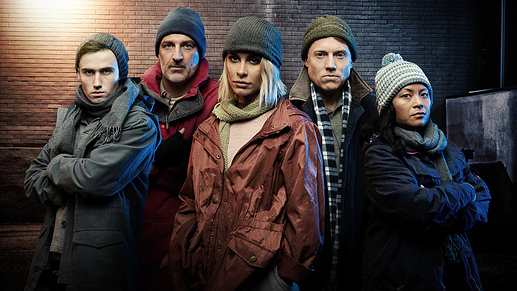 Filthy Rich & Homeless will return for a third series season and air over three successive nights – June 9, 10 and 11 – at 8:30pm on SBS.

Five high-profile Australians agreed to swap their privileged lifestyles for 10 days of being homeless in NSW. They find out what it’s like to go from having everything to having absolutely nothing.

Filming took place before the COVID-19 pandemic in multiple locations across the state, including central Sydney, Western Sydney, and regional cities and towns including Newcastle, Wollongong, Dapto and Nowra.

The five participants meet those who live without a home every day, hear their heartbreaking stories of survival and gain a unique insight and understanding of the varied and complex reasons for how and why homelessness exists. They meet professionals at specialist services who are trying to end homelessness with innovative and successful initiatives. Crucially, they see first-hand the acute need for affordable housing, services and wrap around support, beyond basic shelter.

Guiding them on their journeys are acclaimed journalist and passionate advocate Indira Naidoo, and social researcher and homelessness expert Dr Catherine Robinson .

The five are forced to deal head on with homelessness. By journey’s end, perceptions have been challenged, views changed, and compassion and understanding deepened.

Season 3 of #FilthyRichandHomeless is here. Five high-profile Australians swap privilege for life on the streets, reigniting a national discussion on homelessness, an issue that has never been more pertinent. Watch over three nights – June 9, 10 and 11 – on SBS at 8:30pm https://t.co/hheAzM1Cbn
JohnsonTV May 12, 2020, 9:15am #7

Mumbrella adds that season 3 will be subtitled in Simplified Chinese and Arabic and will be added to the subtitled collection on SBS On Demand, available immediately after its premiere.