Fight for Planet A: Our Climate Challenge

Fight for Planet A: Our Climate Challenge 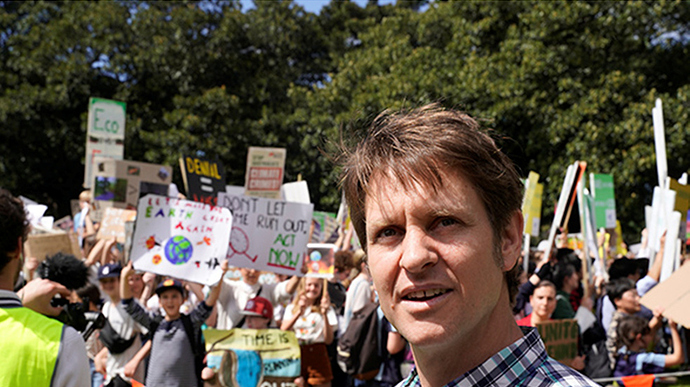 Presenter, prankster and positive planet-promoter, Craig Reucassel returns to Tuesday nights on ABC to once again inspire our thinking and challenge our behaviour, in the must-watch series Fight for Planet A: Our Climate Challenge. Premiering Tuesday 11th August at 8.30pm, over three episodes, Craig takes on a climate challenge to reduce our carbon emissions and understand where our energy comes from, how transport and travel emissions affect our health and just what is the carbon footprint of the things we eat?

Craig says: “I can’t wait to share this series with everyone. The bushfires and COVID-19 pandemic have seen a depressing start to 2020. While the effects of climate change remain one of our planet’s biggest issues, it’s an area where we can hopefully find some more optimism. There are so many things we can do right now to reduce our individual and communities carbon emissions – we just need to make a start. I hope all Australians will join me in the Fight for Planet A.”

Fight for Planet A will entertain, inform and challenge our thoughts on climate change. Craig will showcase how individuals, families, schools and businesses can help reduce our carbon footprint by making practical day-to-day changes, especially in our homes. We’ll meet five very different Aussie households, who will take on Craig’s “climate challenge” to reduce their energy, transport and food carbon emissions.

Far from taking the pressure off businesses, Craig will check in to see if they are doing all they can to make the changes we need and challenge them to do better. He’ll question our politicians and meet some inspiring Australians who are working toward solutions for the future of our planet.

Small actions can lead to big changes and we can all play a part, so it’s time for Australians to collectively change the way we think about climate change and join the Fight for Planet A.

ABC Your Planet takes on the climate challenge

The ABC has launched a new series of programs and resources to explore the urgent environmental challenges facing the planet and the ways in which all Australians can be part of the solution.

ABC Your Planet builds on the ABC’s coverage of climate and environmental issues by enabling audiences to counter challenges such as climate change and the increasing toll of extreme weather events, such as bushfires and floods, in their daily lives.

From now until November, ABC Your Planet will feature diverse programs and resources from across ABC television, radio and digital services, along with community initiatives and events, to inform, engage and empower all Australians to take part in this important national conversation.

New ABC series Fight For Planet A: Our Climate Challenge, which premieres on Tuesday 11 August at 8.30pm, hosted by War On Waste’s Craig Reucassel, will inform Australians about the ways in which they can reduce their carbon footprint through practical changes to their daily energy use, transport and diet. Ahead of this summer’s bushfire season, the ABC will also premiere Big Weather (and how to survive it) to help Australians prepare for and recover from increasingly common extreme weather events.

Audiences can also check out the collection of climate and environment stories on ABC iview, along with programs such as Australia’s Ocean Odyssey: A Journey Down The East Australian Current and Radio National’s Hot Mess series.

Michael Carrington, ABC Director Entertainment & Specialist, said the challenges facing our planet are comprehensive and profound. “Problems such as climate change and the increasing toll of natural disasters such as bushfires, drought and floods affect us all, no matter where we live or what we believe,” he said.

“ABC Your Planet will build on our trusted coverage of the environment and climate issues by giving audiences the information and tools they need to understand these challenges and to be a positive part of the solution.”

National surveys* consistently show most Australians say climate change is one of the most serious issues facing them and the planet. Support for climate action is substantial and growing, particularly in the aftermath of last summer’s bushfires.

*In the ABC’s 2019 Australia Talks National Survey, 72% of people said climate change was the biggest issue facing them personally and 84% were in favour of at least some climate action.
*A January 2020 poll for the Australia Institute found 79% of Australians were concerned about climate change, up 5 points from a similar poll in July 2019.
*The University of Canberra’s Digital News Report: Australia 2020 found about four out of five Australians (79%) consider climate change to be either somewhat, very or extremely serious.

In the first episode Craig seeks to understand and explain where our energy comes from. He persuades five, Australian households to undertake a ‘climate challenge’ encouraging them to see if they can reduce their carbon emissions. He also talks to everyday Australians to see what they think our everyday emissions are compared to countries like China, UK and the US and makes a special delivery to one of Australia’s biggest companies.

Craig Reucassel investigates our transport emissions, which are the second major contributor to our total carbon emissions. He explores how we can make the move from petrol guzzlers to electric vehicles.

We all have a food footprint, but what foods create greenhouse gases? Craig looks at the carbon footprint of what we eat and the importance of where our food comes from.

Australian Communications and Media Authority chair Nerida O’Loughlin revealed at the Senate Estimates committee yesterday that the body is currently investigating a complaint around accuracy and impartiality over the show.

"Nothing happens." ACMA grilled over lack of powers. | TV Tonight

Media watchdog has no powers to slap public broadcasters, even when they ignore a breach finding.

ABC cleared over Fight for Planet A imbalance | TV Tonight

ACMA rejects complaint noting that impartiality does not mean every perspective must have equal airtime.