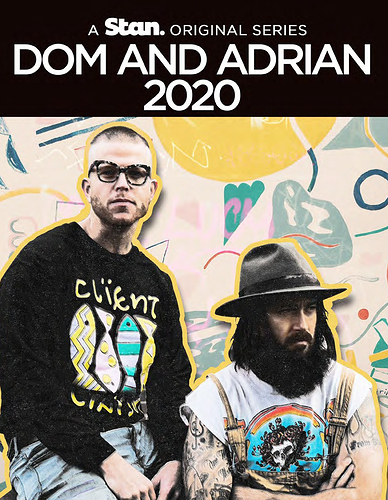 Stan has announced that production has commenced on the new Stan Original Dom and Adrian: 2020 , and will premiere exclusively on Stan in 2020, with principal production investment from Screen Australia.

Having been billed to play at a premier bush doof, Dom and Adrian’s USBJ’ing (DJing with pre-loaded USBs) career was on precipice of taking off… when the bushfires hit. They were next booked to play a bushfire fundraiser when the floods washed through. Then they were going to headline a flood-relief show when the hail storms came down. And now, the night before their biggest gig yet, raising money for the #PanelBeatBondiAiD movement, the whole country was thrown into lockdown because of one little global pandemic, “Such a nanny state!”. In spite of the initial personal turmoil, the two best friends quickly see all this as an opportunity to refocus, “pivot” and evolve creatively

– but as time goes on, it’s not only their creativity and entrepreneurial-ship that’s tested, but their friendship and sanity.

Across the mocumentary special, Dom and Adrian try desperately to remain positive, make rent and redefine their lives. And hey, there’s always regrowth after a fire – so by traversing madness, 5/6G conspiracy theories, being baited by the illuminati and philosophical clashes, Dom and Adrian are forced to rediscover why they’re best friends in the first place.

Dom and Adrian said: “The number 2020 used to be synonymous with good eyesight. But given how much of a bin fire 2020 has been, we’re fully going to have to find a new number to define good eyesight.

“The fall of capitalism has made us a lot more resourceful and there’s a lot of interesting ways you can eat ibis.”

Nick Forward, Chief Content Officer at Stan, said: “We’re delighted to be working with Christiaan, Nick and the team. We’re huge fans of everything the boys have done and we’re really looking forward to being able to bring some laugher and lightness to 2020 – all through the lense of the Bondi Hipsters.”

Lee Naimo, Senior Online Investment Manager at Screen Australia, said: “We are delighted that Christiaan Van Vuuren and Nick Boshier are teaming up with Easy Tiger Productions and producer Julia Corcoran to bring the unique and often hilarious points of view of Bondi Hipsters Dom and Adrian to Stan and YouTube.

“The Bondi Hipsters were part of that first wave of Australian online content creators to carve out a niche with online sketch comedy and we can’t wait to see them further develop these iconic characters as they cope with isolation and the challenges of 2020.”

A viral hit with millennial audiences, the Van Vuuren Bros, Bondi Hipsters and Soul Mates YouTube channels have a collective subscriber base of over 150,000 and boast over 25+ million views to date.

Maybe they should call it Blindsight 2020.

Stan has released a brand new trailer for the upcoming original special Dom and Adrian: 2020