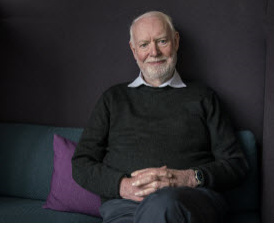 David Stratton’s Stories of Australian Cinema, one of Australia’s most revered film critics takes the audience on a personal journey through the cinematic landscape that shaped both him and us, as he traces the story of Australian cinema.The series interweaves the cinematic visions of our greatest films and their filmmakers, telling intimate behind-the-scenes stories via the voices of iconic stars and industry protagonists alike. David Stratton takes us on a journey across Australia and reveals how he became deeply enmeshed in this nation’s cinema – from his first thrilling glimpse of Australian film, The Overlanders, at the tender age of ten, to his arrival as a Ten Pound Pom, finally becoming a household name in his adoptive country and a renowned authority on an art form that defined the Twentieth Century.

Using unique archive footage and memorable moments from the films themselves, the series focuses on our deepest preoccupations via the multiple depictions of our onscreen selves. It’s through Australian films that David comes to understand his new home and himself, as Australia forged its national identity on the silver screen.

The series explores the game changers – the films and people who revolutionized an industry; the outsider filmmakers and their protagonists, at odds with the landscape and society; and the onscreen tribes who collectively reflect who we are.

David Stratton’s Stories of Australian Cinema feature many greats from in front of and behind the camera – Nicole Kidman, Russell Crowe, Jacqui Weaver, Fred Schepsi, Sam Neill, Judy Davis, Hugo Weaving, Gillian Armstrong, David Michod, Eric Bana and of course many great Australian films, past and present that we know and love

Revered critic David Stratton tells the glorious story of Australian cinema, focusing in on the films that capture the nation’s true nature with such candour, emotion and humour that they still knock us for a six. David is superbly qualified for this task. While he adapted to a new country and turned his passion for cinema into a profession as a film festival director and film critic, a growing band of courageous Australians turned their enthusiasm for storytelling into an extraordinary body of work.

“A nation found its identity through cinema and so did I; this is my journey through the movies that made our nation,” he says.

Those movies are wildly diverse but strong themes echo throughout the body of work.

ABC Head of TV Arts Mandy Chang said “ABC Arts is truly delighted that the feature version of our three part series, David Stratton’s Stories of Australian Cinema - which was originally commissioned by the ABC - has been chosen to screen at Cannes in 2017 as part of the Cannes Classic section of this prestigious and internationally recognised festival. We are especially thrilled by the selection of the film as the idea for the series originated from within ABC Arts and is a testament to our longstanding relationship with David (Stratton). The series and the feature also strongly reflects our enduring relationship with the Adelaide Film Festival and with Amanda Duthie. It was also supported by Screen Australia and Screen NSW. Both the film and the series is the result of an epic team effort and we are all extremely proud of the honour that Cannes has bestowed upon it.”

In conjunction with David Stratton’s Stories of Australian Cinema , the ABC will be CELEBRATING AUSTRALIAN CINEMA with a host of Australian films streaming on iview from June 1. The iview season will include - extras, extended interviews and archival material.

The show has been nominated in the Arts Programming category of the 46th International Emmy Awards, to be presented in New York on November 19 this year.