Most of regional NSW isn’t in lockdown though.

Sometimes I wonder how the situation in NSW got so bad. Then every time Hazzard or Barilaro shoots off at the mouth I start to wonder how it’s not actually 10x worse given they’re a couple of the key people calling the shots…

Pretty much everyone in Bungendore is in ‘virtual lockdown’ since most travel across the Brandenburg Gate for work and other essential activities. Those that can’t work from home are supposed to complete a border declaration at least once every 72 hours! Plenty of confusion around here regarding the rules. And there’s still plenty of traffic on the Kings Highway heading towards the coast (I even saw a caravan)…

ACT today reported two new locally acquired cases: the first case was linked to the original case who was a man in his 20s fro Gungahlin. The second case is a 14-year-old student at Gold Creek High School at Gungahlin, who was not linked to the other cases. The student was infectious and at school from August 9 to 11, and all students, staff and visitors who were at the senior and junior campuses of Gold Creek High School and the nearby Holy Spirit Catholic Primary School, after-school care and the early learning centre plus all household and secondary contacts went immediately into 14-day quarantine and need to be tested.

Health authorities have also confirmed that the first COVID-19 case (the Gungahlin man) had the Delta variant of the virus after genomic sequencing was conducted overnight.

Who is this Ken Behrens that Andrew Barr refers too? 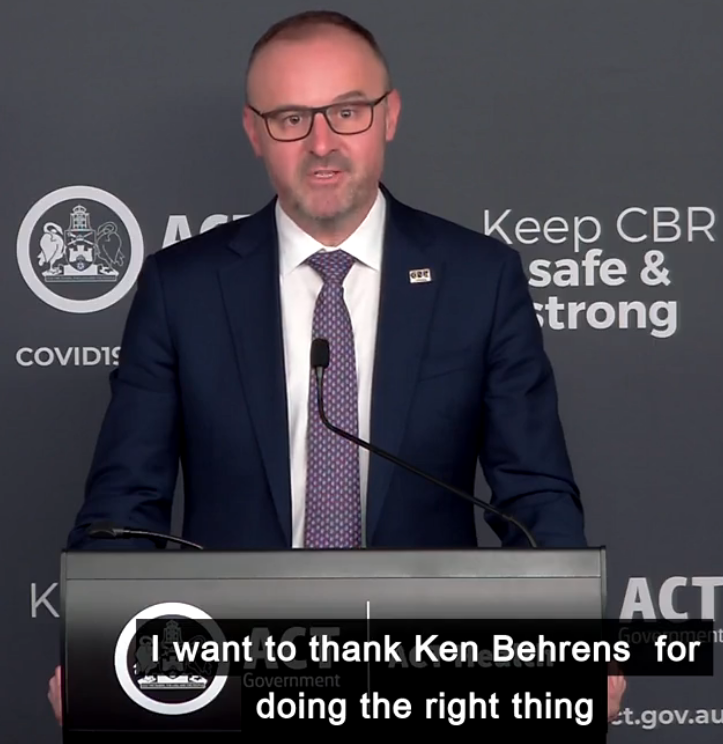 Automatic live transcription isn’t as great as some think it is.

This is actually more harsh than many other states, is Bunnings the only retailer actually open? I don’t believe they are allowing click and collect at the remainder- ie all closed completely.

One new case in ACT reported this morning, a close contact of a previously reported case. None of the seven active cases in the ACT are in hospital.

More than 4,500 tests were conducted yesterday, a new record. 1983 negative tests have been returned so far. There are now more than 4500 close contacts that have been identified by health officials from 39 exposure sites.

In the past 24 hours, there were 2254 vaccines administered, bringing the territory’s total to 167,332 vaccine doses.

UPDATE: News Corp reports that there may be some positive cases arising from a Canberra nightclub case (the original case that sparked the 7-day lockdown in the ACT), including up to three football teams who attended the venue and later returned to regional NSW.

@ACTHealth
Hey CBR! Take it from #kenbehrens you can attend your COVID-19 vaccination appointment during lockdown. Provided you are feeling well and you are not in isolation or quarantine - getting vaccinated is 1 of the 6 essential reasons you can leave your home during the ACT lockdown. https://t.co/HQdiSw4xyL 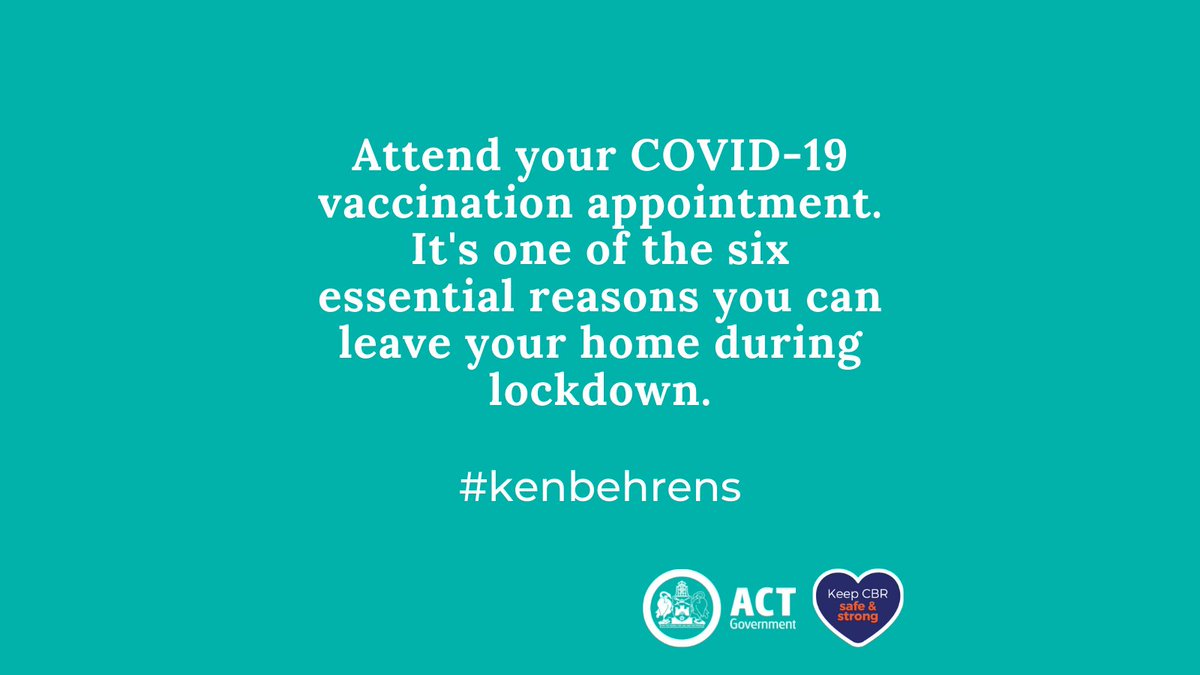 ACT has recorded two new cases. First case is a man in his 20s but not linked to other cases at this stage. The second cases is another man in his 20s, linked to the Fiction nightclub - a close contact exposure site visited by the initial case. None of the active cases are in hospital. More than 5,700 people have identified themselves as close contacts and 5,943 tests were conducted yesterday.

CHO Kerryn Coleman today confirmed that a close contact of the 14-year-old student at Gold Creek High School was among the previously reported positive cases.

Chief Minister Andrew Barr said the ACT would be allocated around 14,000 does of Pfizer vaccines later this week, as part of the Federal Government’s announcement this morning that it would receive one million doses of Pfizer from Poland.

According to The Daily Telegraph, at least a dozen people aged in their late teens to early 20s and their family members from Bega, Merimbula and Tathra on the NSW South Coast, are reportedly quarantining and waiting for test results after the group visited Fiction in the early hours of August 8. One of the people quarantining is reportedly a teacher at a local school. 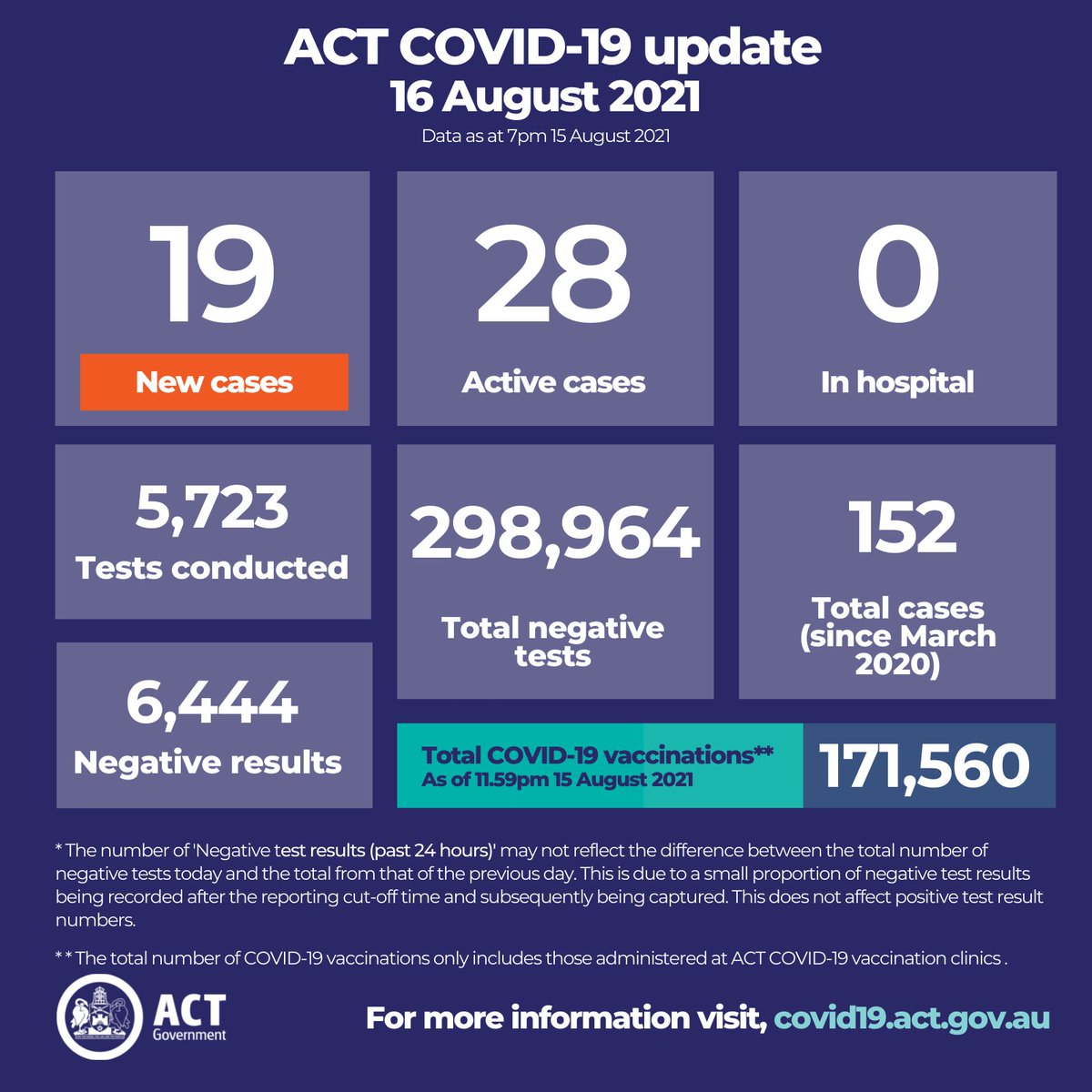 The 19 new cases includes a student from Lyneham High School (who was infectious at the school from Monday to Thursday last week), and a staff member at the Greenway Views aged-care facility (who had received one dose of a vaccine and was unwittingly infectious for three shifts at work).

The current lockdown has been extended for two more weeks, until at least September 2.

From 10pm Monday evening, the Australian Capital Territory will be an extreme risk zone under the Victorian government’s travel permit system.

I love this notion of states who are in lockdown and have cases themselves labelling other states. Like honestly. Get over yourselves.

The ACT has recorded 17 new cases, taking the cluster in the nation’s capital to 45.

Chief Minister Andrew Barr said a record 7,380 tests were conducted in the territory yesterday. He said the public health directions would be amended to ensure people to shop promptly at stores which are permitted to open, and ACT Policing and businesses would enforce the new rules. He also said his government was working on COVID-safe transition plans for the construction industry which remains closed during the lockdown.

Later, ACT Labor senator Katy Gallagher confirmed on Twitter that her daughter, Evie, was one of the 17 new cases. 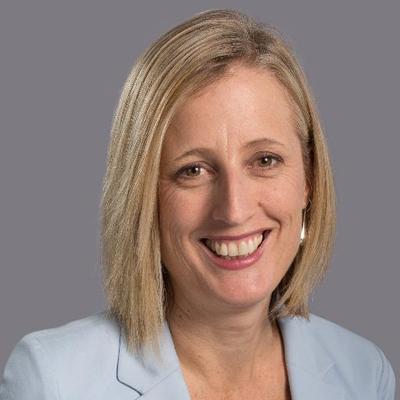 @SenKatyG
This morning we were advised that my gorgeous daughter Evie has tested positive for COVID-19. One of Canberra’s 17 positive cases today. My full statement is available on this link or on my Facebook page. katygallagher.com.au/news/media-rel… https://t.co/2iFyecwgce 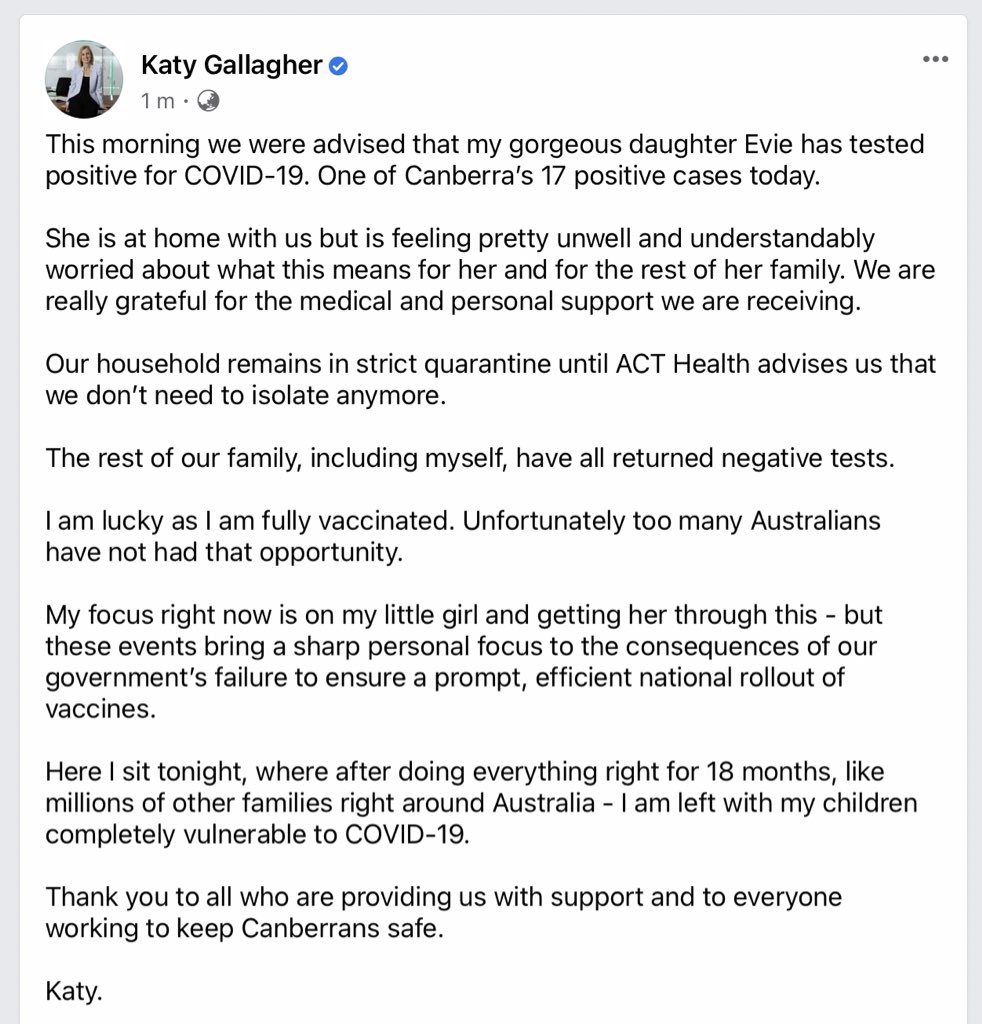 Wednesday 18 August -
22 new cases reported, all linked to existing cases. 63 of the 67 cases are now linked.

Of the current outbreak, 15 cases are linked to Lyneham High School, 13 to Fiction nightclub, six to the Lennock Jaguar Land Rover dealership, five to the Belconnen basketball stadium, five to Gold Creek School, three to the Downer Community centre, and two to Assembly Bar.

8,417 tests were conducted in the past 24 hours, another new daily record.

Up to 40 ACT school principals are in isolation after attending a conference last Wednesday at a school that’s been linked to Canberra’s current COVID-19 outbreak.

Thursday 19 August -
16 new cases reported, one of which is linked to a childcare centre. Eleven of the new cases are linked to existing cases, with five still under investigation — meaning nine of the 83 cases are currently unlinked.

Friday 20 August -
ACT recorded 12 new cases overnight. Andrew Barr said 11 of those new cases were linked to known cases, while the 12th was still being investigated. CHO Kerryn Coleman added that there are seven mystery cases under investigation, including the new one from overnight.

Saturday 21 August -
ACT has recorded eight new cases, all of which are linked to other known cases and none were infectious in the community. The total number of active cases in the territory is 102. There have been 4683 tests over the past 24 hours. 40% of cases are below the age of 17 due to outbreaks in various schools.