2MIA FM Griffith is running on extremely low power for now, they were off air for a while after their tower fell down in a wind storm last Friday, (photos on their facebook page).

Their tech has put a short pole up on their transmitter hut with 1 folded dipole antenna connected, running about 12W, tech is going to put a taller pole up soon & they are still looking at options to get another full sized tower.

A lot of sass in this given it took ACMA two years to make a ruling.

But so typical of ACMA to be this harsh on a community broadcaster. 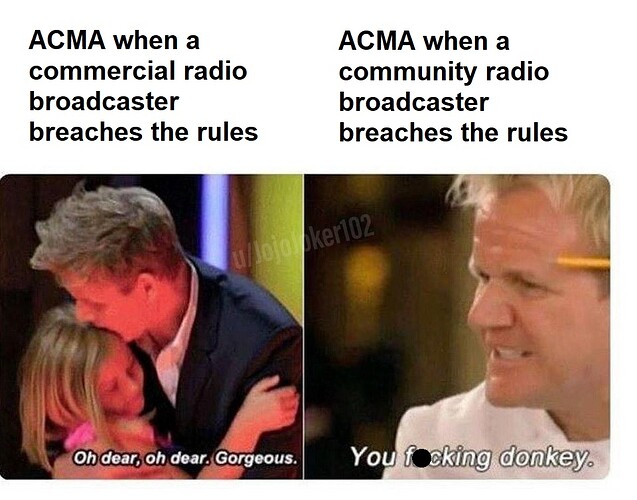 Looks like 2MIA will live up to its callsign for a while. Missing In Action from the dial.

Good call from ACMA.
Look at the program schedule on their website!
There seems to be only a 2 hour block (Sunday night 10pm-midnight) where station volunteers present a program on a one-off basis.
Yet, after 6pm weeknights and weekend afternoons are blank. Surely some of those volunteers would jump at the chance to host a regular program.
A few years ago, I was speaking to someone indirectly involved with 2YOU and it’s pretty much a closed shop, taken over by ex-commercial radio people. I was also told the format was changed to keep businesses like Harvey Norman happy.
I do get that to pay the bills, you need to have a good product to sell. However, what 2YOU do totally defeats the purposes of community radio.
I’ve heard other community stations that run a standard format during the day, which is sellable, then open the programming to volunteers at night and during the weekend - some good examples I’ve heard are SWR, CoastFM and Great Lakes FM in Foster.

3MFM in South Gippsland will be rebranding as South Coast FM from Sunday 12th February. Victorian community radio station 3mFM is undergoing a name change. It will be known as South Coast FM and will go to air under its new name from Sunday,

It’ll be interesting to see what their new RDS will be … hopefully SCFM and no Dynamic text.

Thanks to ducting, i can hear Music FM Moss Vale 92.5 has programming back on air.

I’m up near Newcastle, i can’t normally hear Moss Vale from up here (about 260 km north by road). Fresh 92.7 is celebrating the latest McNair Community Radio Survey’s survey after the community station topped its previous records. Heading into its 25th

Signal seemed OK, but audio kept cutting in and out. It was basically unlistenable Anyone else having the same issue?

Signal seemed OK, but audio kept cutting in and out. It was basically unlistenable Anyone else having the same issue?

Its been going on for a while, have tried to let them know, but they blocked me on Facebook…

Send a message to ACMA then, sounds like nothing has changed in the Hawkesbury with community radio, seems like they don’t care about the quality of their transmission & aren’t interested in any community involvement/feedback about the station which goes against their license conditions, not a good start IMO.

Its been going on for a while, have tried to let them know, but they blocked me on Facebook…

A bit harsh! You come across as very helpful online and proactive.

102.7 seems 2-3 times stronger than previously now. Signal is quite clear in many parts of Brisbane with RDS including in car.

Where were you listening from?

It depends…, do you remember “Judge Judy”, great TV show, as she says… “the truth is always somewhere in the middle”. Also as the B FM Bankstown Investigation found, Community Radio Stations should be wary of accepting members from outside their licence area.