A new 3x60 documentary series The Bully Project is in production where Olympian and former Young Australian of the Year Ian Thorpe OAM will host a confronting new series aimed at tackling the issue of bullying by taking audiences to the frontline.

The Bully Project will form the central plank of a season of programming running across the ABC. The aim of the season, which will be supported by partner ReachOut Australia, is to examine the causes, context and consequences of bullying in Australia today. As the country’s leading online mental health service for young people, ReachOut’s 18 years of experience will be invaluable in helping the ABC develop audience pathways to further help, advice and support for anyone affected by what is a complex issue.

Ian is encouraging members of the public aged 14 – 18-years-of-age who have been bullied to get in touch to take part in The Bully Project: “More than a quarter of school children in Australia claim to have been bullied on a regular basis, which is unacceptable. I’m passionate about shining a light on this issue. If you live in Queensland, and you or your child is being bullied or know someone who is, we want to hear from you. Go to stopbullying.tv to find out more.”
Speaking about his involvement, Ian said: “I have some personal experience around the issue of bullying so I want to share my insights to help Australian kids.”

ABC TV has teamed up with KEO Australia and Lune Media to tackle a significant problem for our young people. Based on a tested and successful Dutch format by SkyHigh TV, now in its second season, the series adopts the controversial but eye-opening approach of arming those being bullied with hidden cameras to capture their experience firsthand, which has resulted in positive outcomes for participants. The production will film in Queensland this year, where surveillance device legislation permits a format of this nature. Detailed protocols outlining the high level duty of care and involvement of skilled practitioners have been agreed by the ABC and KEO ahead of undertaking the project to ensure the welfare of all participants.

ABC Director of Television Richard Finlayson said: “The statistics are shocking. The ABC is committed to being the home of important national conversations and I expect The Bully Project and the ABC’s season of programming will act as a catalyst for this issue. We are working closely with our production partners to ensure the highest duty of care to all participants, while lifting the lid on what’s actually taking place among young people today.”

Lune Media Managing Director Leonie Lowe said: “We believe that The Bully Project will generate comment, debate and ultimately help effect a change in public attitude. It will bring to light an issue that is widely known about but rarely understood, while at all times protecting the rights and welfare of all those involved.”

ReachOut Chief Executive Officer Jonathan Nicholas said: “ReachOut provides practical support on a range of issues that matter to young people. Information on bullying is accessed thousands of times each week, making it some of the most accessed content on ReachOut.com. Bullying can affect people in different ways and have serious impacts on mental health and wellbeing. As a key partner of this important season of programming, our role is to work with the ABC and other services to help connect people affected by bullying to information and support that’s right for them.”

coming at an important time with the safe schools program under review, and pro-bullying politicians damaging language being unleashed with very little voice of opposition from other leaders.

Should be a good series this

Yeah fat lard Christiansen and “real truths” Bernadi will undoubtedly have a nice ol’ whinge about the “biased ABC” and its “pro-gay marriage agenda”. It’s kinda hilarious that Safe Schools was under attack all this past week, and then the ABC announces a doco about bullying, hosted by an LGBT figurehead. It’s obviously been in production for a while, but the timing is perfect.

The attack from the far right loons will be swift and loud but then widely condemned - hopefully it shuns them further into obscurity.

Thorpe is a great choice of host for this considering he was quite aggressively in the closet for most of his adult life, the topic would have to be one that hits very close to home.

Thorpey is mates with Alan Jones (the irony of who was the most blatant closet case in Australia been friends with the 2nd most blatant) is he not? So I think the ABC bashing for this series will either come from the pollies or from The Australian only. 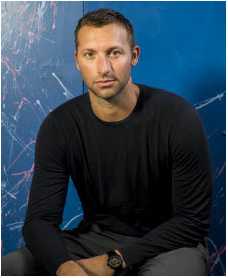 Olympian Ian Thorpe is tackling the issue of bullying by taking audiences to the frontline of an issue that deeply affects a quarter of all school-aged children in Australia. Bullied adopts a controversial approach by arming the victims of bullying with cameras to capture and reveal their experience firsthand. The aim is not to name and shame the bullies, but to work with all participants to achieve a positive, lasting and supportive outcome. Bullied will examine the causes, context and consequences of bullying in Australia today through real-life experiences. With the additional support of specialist child psychologists, Bullied will bring to light an issue that is widely talked about but rarely understood. With Ian Thorpe by their side, these young people will find the courage to reveal their experiences to their families, teachers and peers with the hope of changing their lives. Bullied will form the central plank of a season of programming running across the ABC in 2017.

Runs for: Three x 1 hour episodes, on ABC and iview

Bullied, presented by Australian sporting legend Ian Thorpe, will spearhead the ‘Our Focus on Bullying’ season – a slate of programing across the ABC that explores the complex issue of bullying. The two-part documentary series co-produced by KEO Films Australia and Lune Media will have its world premiere on Tuesday 14 March at 8.30pm on ABC & ABC iview.

Around Australia, the issue of bullying is well known. Lesser known is the fact that most commonly, school bullying is not about one-on-one situations, it’s about group behaviour. In Bullied, the topic will be tackled head-on as those being bullied gather video evidence to present to their classmates in an effort to resolve a bullying situation.

At no stage are the bullies identified in the hidden camera footage. This footage is shown first to their parents, and then to their classmates and peers as part of a voluntary group session. The aim is to help them understand the impact the bullying is having, and how they might work together to stop it happening. With the support of specialist child psychologists, and examining specifically Australian scenarios, Bullied will bring to light an issue that is widely talked about, but rarely understood.

The aim of the ‘Our Focus on Bullying’ season is to examine the causes, context, and consequences of bullying in Australia today. The ABC has worked closely with ReachOut and Kids Helpline to create an online portal that contains information, education, and support pathways for those impacted by bullying. See the website: www.abc.net.au/bullying

The season of programing also features the world premiere of Cyberhate with Tara Moss, (screening on ABC iview straight after the premiere of Bullied and on ABC2, Wednesday 15 March at 9.30pm) in which author, journalist, TV presenter and human rights advocate Tara Moss tours the darkest corners of the web to uncover the cyber violence affecting so many people today.

ReachOut Chief Executive Officer Jonathan Nicholas said: “132,000 young people and parents turn to ReachOut every month, with bullying one of our most accessed support topics. The ABC’s online bullying support portal, which we have developed with Kids Helpline, will make it easier for audiences to find the help that’s right for them – whether it be digital self-help, peer-to-peer forums, telephone counselling, or crisis support.”

ABC Head of Factual, Steve Bibb said: "The ABC is committed to shining a light on issues of significance to all Australians. There’s no doubt that bullying is one of those complex issues – one that tears at the fabric of society.

Bullied tackles the problem in an unconventional way with the aim of helping families, where all else has failed.

These young people and their families are brave. By turning to Bullied and sharing their stories they allow us all to go beyond the rhetoric, ignite a national conversation and explore solutions to stop bullying.”

Leonie Lowe, Lune Media, Managing Director echoed those thoughts saying: "The series will bring to light a complex issue that is widely known about but rarely understood, while at all times protecting the rights and welfare of all those involved.

Our hope is the series helps address bullying amongst young people in Australia and audiences will gain a meaningful understanding of bullying, how it happens and its impact today.”