Premieres in the 8.30pm timeslot

Richard Roxburgh is on the front cover of TV Week this week with his transformation into Roger Rogerson.

Promos look great and Richard is one the best actors in this country so really looking forward to watching.

Looking forward to this too.
Was hoping a re-airing of the original but unfortunately it does not look like occurring.

Richard Roxburgh is on the front cover of TV Week this week with his transformation into Roger Rogerson.

Looking forward to this too.

Was hoping a re-airing of the original but unfortunately it does not look like occurring.

Yes, agree completely. It would have helped get more viewers for 7 as well. But why start making sensible decisions now.

It seems incredible that TV Week only just realised there are more than 23million viewers in Australia who don’t watch Home and Away.

Noticed Seven have given Blue Murder an MA15+ classification.

Promos have it scheduled for 8:30pm Sunday.

Whilst MA programming is now allowed at 8:30pm, it is permitting it isn’t a film/telemovie/mini series.

See the problem, but perhaps I’m wrong, so correct me if I’m wrong?

Just checked the ACMA code and the 9pm restriction for MA only applies to “films” (which is what I was getting at).

But their definition of “film”:

“Film means any feature film, documentary or short film that has had first release in
Australia through public exhibition (including cinematic release) or sale/hire and
which has been classified by the Classification Board.”

perhaps I’m wrong, so correct me if I’m wrong?

Doesn’t the ABC own the original Blue Murder?

Even if Seven could show it I’m not sure it would be a good idea. It would be asking viewers to sit through four parts rather than two. I’d happily do it, but maybe some viewers wouldn’t.

I switched it off after the first ad break. Found the storyline boring

They showed excerpts from the original Blue Murder miniseries so viewers like me get to know Roger’s background.

I’m looking forward to the Eddie Obeid miniseries, when one is eventually made.

So the general consensus is it was as good as it looked and delivered? Good I should enjoy it then. I really wish it wasn’t on consecutive nights though. I’m going to have to torrent it. 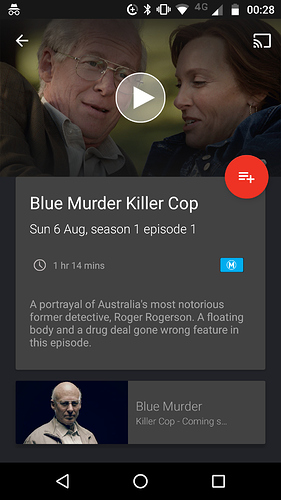 Just watch it on plus 7?