Based on last night’s promos, the second season of Black Comedy “coming soon” must be the first Aussie comedy screening in 2016.

ABC TV’s comedy series Black Comedy returns in February. Black Comedy uses an array of talented Indigenous and non-Indigenous performers to explore what it means to be Indigenous in contemporary Australia.

New characters include Uncle Doctor, a medico whose methods are more than just a little unconventional, the Thong Mum, a woman whose ability with a boomerang thong is deadly, and the Beachies, a father and son who spend their days sitting on a log on their Torres Strait Island home staring out to sea and pondering the imponderable.

We also meet Ray, a recent parolee and menacing new member of the Black Comedy team, recruited as part of the ABC’s Bridging The Gap Program, we pay homage to The Godfather with The Elders, an epic four-part tale of a turf war between two Matriarchs feuding over the rights to Melbourne’s lucrative ‘Welcome to Country’ income stream, and we go back in time to revisit a classic ‘lost’ Australian gothic horror movies of the early 70s, the unforgettable ‘Wandaroorah’, a film about a little town that needs Aboriginals - and will go to terrifying lengths to get them. We also take Blakforce to new heights with Blakforce SCU: Special Coconut Unit – the elite group of detectives charged with investigating large-scale crimes against Blackness.

Black Comedy is a fast paced, irreverent, entertaining, thought provoking - at times silly - at other times confronting, but always funny look at Australia and Australian culture through the comedic prism of our first people.

Black Comedy gets a third season in 2018 which is good for sketch comedy. A lot of others haven’t gone to a second season let alone a third now.

Black Comedy is Back

New cast, new writers and a whole lot of new laughs…ABC is pleased to announce that series three of Black Comedy starts filming in Sydney today.

Fresh, original and just a little bit wrong, first launching in 2014, Black Comedy debuted to rave reviews and garnered a legion of fans and millions of views online. Featuring sketches that spawned catch-phrases mimicked all around the country, Black Comedy takes a cheeky look at Australian culture through the comedic prism of our nation’s first people, with no area off limits.

Written and directed entirely by Blackfellas, the six-part series combines a mix of observational and physical sketches, historical sketches and parodies of TV, film and commercials.

Black Comedy will film in and around Sydney over the next five weeks and will screen on ABC later in the year.

From Wednesday 19 September at 9:30pm

It’s black comedy by blackfellas, for everyone.

Starting Wednesday 19th September at 9.30pm, the third series of Black Comedy continues an acerbic, witty and altogether unapologetic comedic exploration of what it means to be black in contemporary Australia. The sketch comedy show is written and performed by some of the sharpest and funniest blackfellas in the country who carve up sacred cows, dismantle stereotypes, and turn modern Australian culture inside out.

New characters include Bondi Blackfella, a lifesaver who’s more at home on the land than in the water, the Boomerang Brothers, a pair of unlikely identical twins with an even more unlikely discount store, Aunty Mary - a beautician of questionable talent, Trent, a young man who can’t quite live up to his own myth, the Wigglymuyu Dancers, a traditional dance troupe who perform their not-so-traditional dances against the backdrop of Sydney Harbour - and Tash, Nicole and Tyrone, the occupants of Melbourne’s blackest, and loosest sharehouse.

We also meet Mark, a Torres Strait Islander man who survives a plane crash only to find himself marooned on a desert island with the whitest white people of all time, we pay homage to the 70s horror classic the Exorcist with the Cuzorcist as a priest tries to rid a family home of an unwanted cousin, we sit in on a Monopoly game that takes a very sinister twist when Nikki’s white boyfriend decides he’s going to take the game a little too seriously, we hit the streets with a detective as she blows the lid off the illegal Confirmation of Aboriginality trade in COA, we spend a night with a white businessman and high class call girl as he lives out his ultimate fantasy - an Indigenous Girlfriend Experience - and we revisit the men and women of Blakforce SCU: Special Coconut Unit as they try and identify a mole in their ranks.

Are you Indigenous AND funny? Are you a fan of the ABC TV show Black Comedy? Or do you reckon you could do better?! Maybe you’ve got what it takes to be involved in the show?

Well, we’re looking for you!

ABC Indigenous, Screen Australia’s Indigenous Department and Scarlett Pictures are calling for up to 15 Indigenous writers and writer/performers to be involved in a workshop for a potential fourth series of Black Comedy.

The workshop will be a hothouse environment where you’ll learn the basics of sketch writing, workshop ideas, write them up and then test them out.

Submissions close on Monday 24 September at 10am.

Please apply by completing the form below.

Read the Workshop Guidelines to find out more.

god damn, series 3 hasn’t even premiered yet and they’re already looking ahead for season 4. Bring it on!

Awesome to have the opportunity to see some fresh faces in TV.

this week’s episode is probably the best so far!

The fourth series of Black Comedy will continue an acerbic, witty and altogether unapologetic comedic exploration of what it means to be black in contemporary Australia. The sketch comedy show is written and performed by some of the sharpest and funniest blackfellas in the country who carve up sacred cows, dismantle stereotypes, and turn modern Australian culture inside out. Alongside the current team will be some exciting new (and not so new) talents for season four.

The fourth series will continue an acerbic, witty and altogether unapologetic comedic exploration of what it means to be black in contemporary Australia. 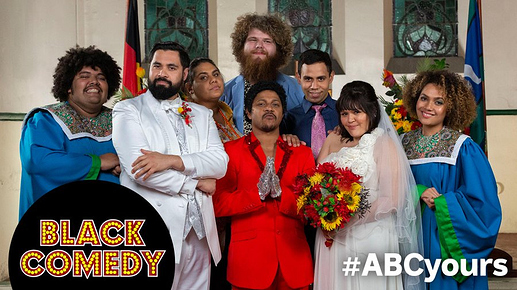 Note that this was promised at the 2019 Upfronts.

From Wednesday 5 February at 9.00pm

The fourth and final series of Black Comedy continues the witty, whacky, sometimes acerbic, but altogether unapologetic comedic exploration of what it means to be black in contemporary Australia. The show is written and performed by some of the funniest blackfellas in the country – a creative team who joyfully carve up sacred cows, dismantle stereotypes, and turn modern Australian culture inside out.

During episode one, we meet a Full On Murri who has very strong opinions on how Blackfellas should and shouldn’t behave, we spend time on the couch with a couple of cousins who are considering getting to know each other a lot better, and we accompany Shane on his first day at University as he discovers that things are not all as they seem. 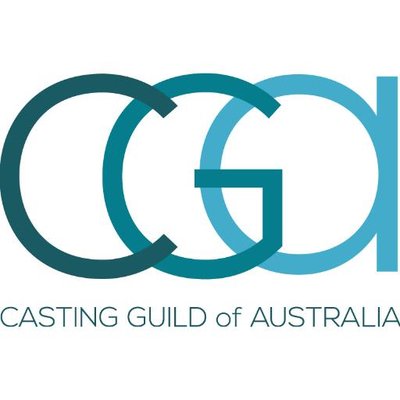 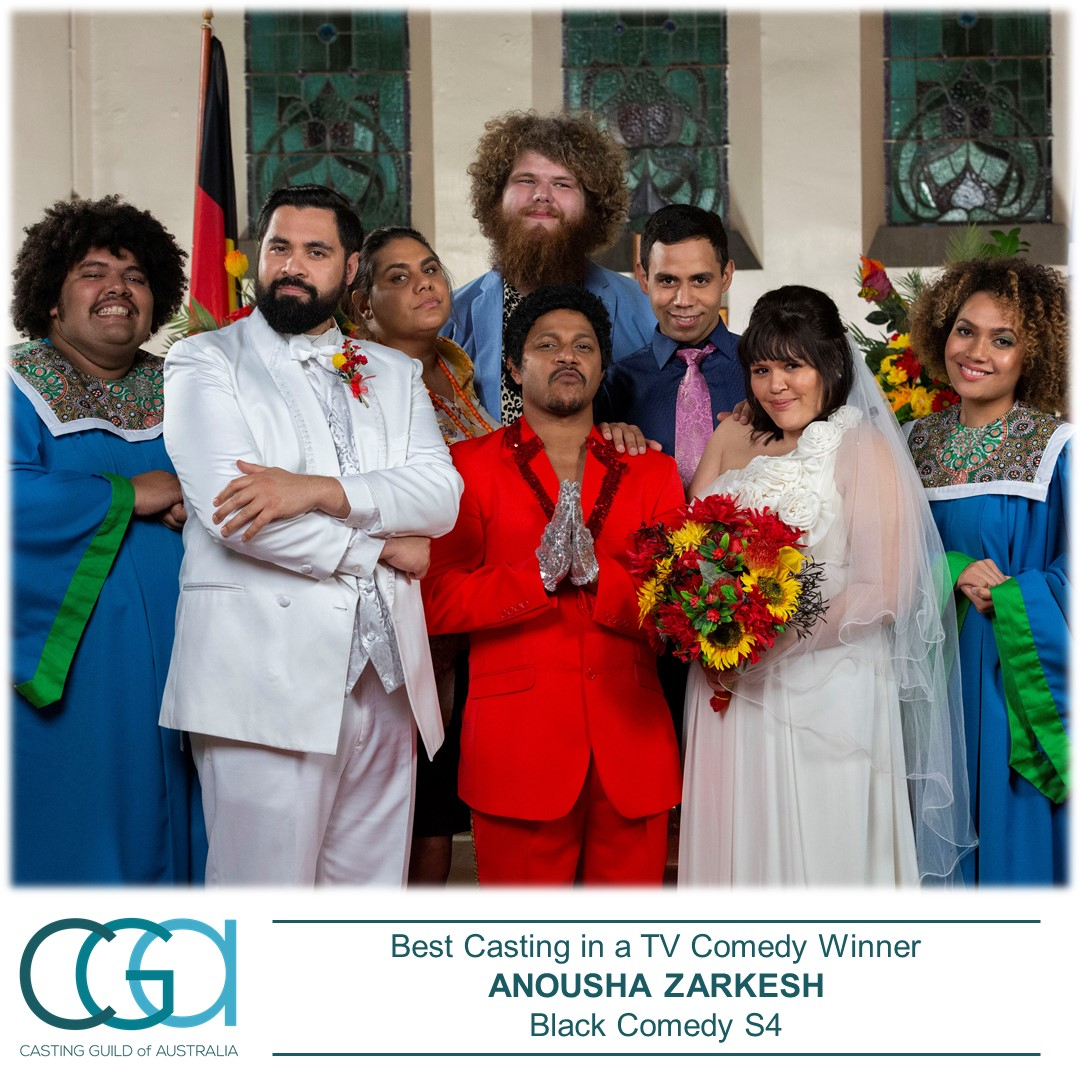