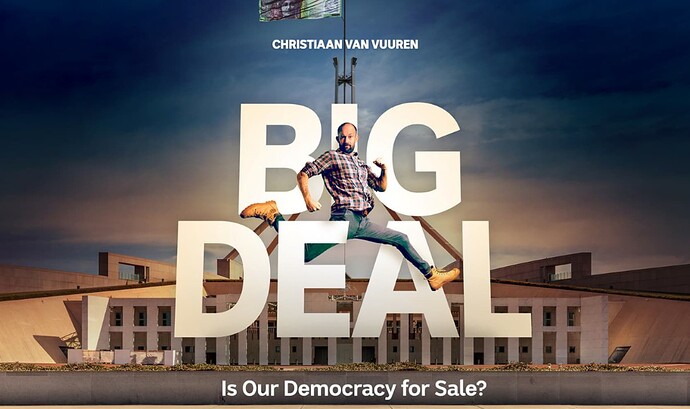 Christiaan Van Vuuren’s unlikely journey shows us why we should care, and how we might work together to ensure our democracy is safeguarded from being sold to the highest bidder.

Big Deal looks at Australia’s billion-dollar political lobbying industry. For every federal politician, there’s millions of dollars devoted just to swinging their opinion, or their vote.This engaging ABC factual series is a wake-up call about the frightening extent to which money has infiltrated politics.

Big Deal is presented by Christiaan Van Vuuren (Soul Mates, Bondi Hipsters) - an everyday Australian - a comedian and a father with a keen sense of fairness, justice, and humour. He’s no political expert. But he got obsessed watching America slowly falling apart. And he was shocked to realise that it was not only the American democracy being ruled by big money – but that Australia has a problem too.

Promo for next week’s show

@QandA
Craig Reucassel's directorial debut Big Deal, which airs next week on @ABCTV, investigates political donations and lobbying in Australia, and asks, is our democracy for sale? If you have a question for Craig, submit it via the #QandA website now. https://t.co/NFDJlPsdl2
JohnsonTV October 17, 2021, 11:05pm #3

Becoming a young father saw comedian Christiaan van Vuuren worrying about the future and the murky world of political donations.