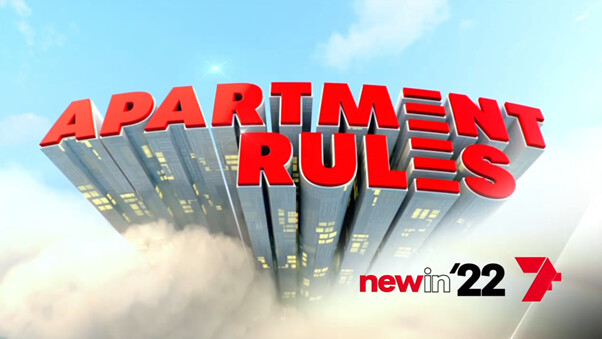 The mega-hit that was House Rules will be reborn and reimagined in an innovative twist to the format. Set in one of Australia’s biggest cities, the new series will take renovation to a whole new level. Stay tuned for more details in 2022.

@Channel7
The mega-hit that was House Rules will be reborn and reimagined in an innovative new format. Set in one of Australia’s biggest cities, the new series will take renovation to a whole new level! 🏙️ #ApartmentRules Coming to @Channel7 in 2022. #7Upfront https://t.co/Cc9m3HaEVn
2 Likes
Nicholas October 12, 2021, 2:34am #2

Obviously we need more details on this, but is this not The Block: Sky High?

Obviously we need more details on this, but is this not The Block: Sky High ?

My first thought was that this looks like a 90% copycat from The Block. At least House Rules was renovating houses but now this looks almost exactly like The Block, but on Seven.

Also they think they can paint some gold over this dead show with a new name but anyone with sense would see this as another desperate attempt to revive the ‘Rules’ brand.

You have to wonder how many apartments there would even be in Australia that were big enough to have multiple teams renovating different sections?

They found a big apartment that fit the brief in House Rules:High Stakes but I wonder if there are that many other apartments like that. Maybe the new show will have a different concept.

While I didn’t watch either, I thought it was The Block rather than House Rules which had “Sky High” as a gimmick one year…

It was called House Rules: High Stakes I think.

My apologies. Goes to show how much I pay attention to all this crud.

And other than the high rise apartment forming the opening challenge it didn’t really define the series - although the ending of course was curtailed somewhat due to Covid.

With no talent or format details announced though this very much feels like a show announced for 2022 that won’t air in 2022.

Seven’s Director of Scheduling Brook Hall has told TV Tonight that the show may move to 2023 in order to find the best timing. He says the network doesn’t want to put it up against The Block.

Probably air in between Australian Idol and BBVIP2.

There is no BBVIP2 as mentioned in the BB thread.

I think you missed the point.

Remember that House Rules reboot that was announced?

Wonder if Seven’s rethinking whether or not to reboot this given MKR’s reboot flopped and House/Apartment Rules was always perceived to be the weaker show.

Bit early to say it’s flopped isn’t it? Yes, third in the overnights but stlll above where Big Brother has been and still got to see how the 7 day figures pan out, though I suspect it won’t pick up as well as Big Brother did.

If anything The Block thrashing MKR will see Seven execs even more convinced they’re correct to revive their own property brand, especially as it seems to be moving towards being a Block rip off.

All that said though I agree it’s a revival nobody is asking for and switching to Apartments won’t do it any favours.