About the Regional News Broadcasts category

(Replace this first paragraph with a brief description of your new category. This guidance will appear in the category selection area, so try to keep it below 200 characters. Until you edit this description or create topics, this category won’t appear on the categories page.)

Use the following paragraphs for a longer description, or to establish category guidelines or rules:

Regional Australians report that television (34 per cent) and print media (21 per cent) are their most preferred sources of local news, with commercial television being the most trusted (21 per cent), according to Australian Communications and Media Authority research released today.

Local content in regional Australia—2017 report also shows that 86 per cent of regional residents believe local news is important and 87 per cent are satisfied with its overall quality.

‘For example the proportion of regional Australians using social media (18 per cent) and websites (26 per cent) to access local news has significantly increased since 2013.

‘The 2017 report also presents new findings on the availability of, and preferences for, local news, sport, weather and community events, with a particular focus on the way age influences how regional Australians access local news,’ he added.

The findings will be presented as part of the ACMA’s Australian content conversation, on 16 and 17 May at the International Conference Centre, Sydney. More information and registration details are available here.

Scope of the research

Commercial media is the predominant source of local content in regional Australia available on traditional and online sources.

One of the key findings was the way age influences how regional Australians access local news, as shown in the figures below:

How does age influence what regional Australians use to access local news? 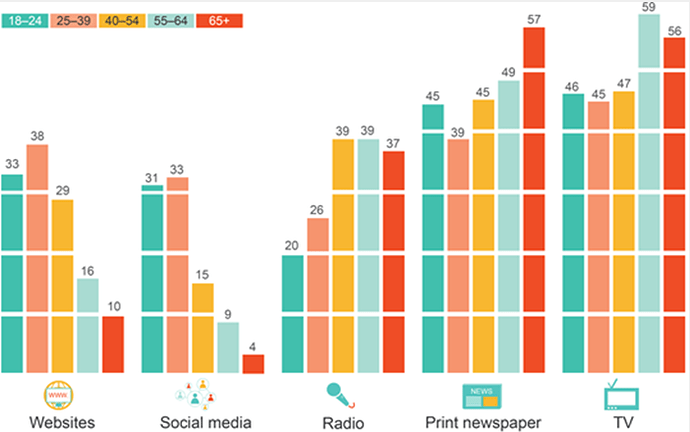 The research into trust and reliability for local news shows:

An analysis of Regional TAM television ratings data for the period 2003 to 30 June 2016 using average audience figures and target audience rating points. Ratings data was not included after 30 June 2016, as it was considered that such data may be skewed by network affiliation changes that occurred from 1 July 2016.

Case studies of 11 regional localities were undertaken to examine the availability of local content and local news across both traditional media and online sources, including the quantity of local news produced and the frequency local content sources are updated. Each locality was selected based on a range of characteristics, including geographic area, population size, applicable television licence area(s) and the number of commercial television services provided in the locality. Social media and open narrowcasting services were also included in the case studies.

These reports are available on the researchacma index on the ACMA website. An infographic summarizing the results is also available.