Didn’t realise there were so many variations on Sundays.

The NBN variations were usually in ADDITION to the TCN Sydney game… NBN would air it’s own or the FOX/Optus Vision of a game live at 2.30 and then crash into TCN’s delayed 4pm coverage (1 hr delay) around 4.15pm.

As I vaguely recall, the Queensland games were aired on QTQ and RTQ instead of the Sydney game at 4pm local time.

I don’t remember what IMP or NTD did back then.

Not in 1994, the Sunday replay was 1 hour highlights which really was 42 minutes post editing/ads after the news and went to everyone in the RL states regardless of where they lived, and the Queensland variations were shown before the news. They were late night or even very early morning if shown at all in AFL states knowing priority on 9 was given to F1/Motorbikes/Golf/Wimbledon.

It wasn’t until 1998 that the Sunday game was shown almost entirely at 4PM (it remained at 6:30 in 1995 with Queensland often getting a bonus game on the Sunday at 5PM, was axed midway through 1996 for Monday Night games, and 9 didn’t air any league on Sundays in 1997 in terms of game coverage save for finals with ARL on Optus and Super League replayed on ABC after Fox’s live coverage).

Pay TV wasn’t in the picture in 1994 although rights to this apparently were held by Packer when/if it got launched.

Thanks for the clarifications, you’re right 1994 was before Pay TV. 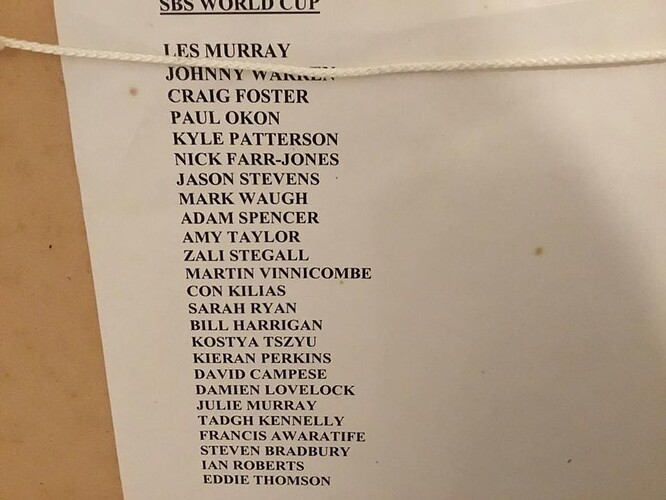 A few headscratching names there

It looks like that back of a picture frame, what’s the context @BigVic ?

Trying to work out what 2 Union players (Farr-Jones, Campo), 2 League players (Stevens, Roberts) and a referee (Harrigan), a cricketer (M.Waugh), a track cyclist (Vinnicombe), a boxer (Kostya), a skiier turned politician (Steggall), a speed skater turned sporting term (Bradbury), 2 swimmers (Ryan, Perkins), a bloke whom I’d never heard of (Kilias) and a Gaelic Footballer who was years from the AFL (Kennelly) had to do with the World Game much less the World Cup? I mean Spencer and Lovelock were superfans, Thomson of course coached the Socceroos in the failed 94 campaign and Taylor and Murray were Matildas before they became popular…

Sounds plausible, but definitely not for France '98. (Steven Bradbury didn’t get his gold medal until the winter olympics of Salt Lake City in 2002, for instance, and Tadgh as you mentioned.)

Maybe one of the later cups when the Socceroos had qualified (2006 or 2010 maybe?), certainly would’ve given SBS the chance to crap on nauseatingly with those from other sports on what Australia qualifying “meant to them” and all that.

SBS hosted their matches solely from Australia in ‘02 due to being awarded their package extremely late. Was the only time I can recall it happening before this year although it quite possibly occurred before 1998.

Edit: I think Paul Williams was calling matches for SBS in ‘98 but not ‘02 which may back up that it’s an ‘02 list

Possibly a reflection of getting the rights late and having to cobble some sort of team together at short notice.

Maybe they just appeared once or twice as guests?

I’d imagine so, there’s no way ALL of them would have been on the broadcast for all games.

had to do with the World Game much less the World Cup?

From memory, it would have also been the first world cup that had a significant national audience on SBS as the regional rollout had predominately been completed (we didnt have SBS at the time, so I only got to see the final because I was away) - was it an effort to make the coverage more attractive?

Also possible - worth also flagging that Nine were the lead Australian broadcaster for '02; Korea/Japan meant prime-time slots in Australia, only being 1-2 hours difference to AEST. Hence why the late SBS package of games.

That may have also allowed more talk time in The World Game studio for the games sub-let to SBS, and in the show’s usual weekend timeslot - given SBS had only started that show the year before.

worth also flagging that Nine were the lead Australian broadcaster for '02; Korea/Japan meant prime-time slots in Australia, only being 1-2 hours difference to AEST. Hence why the late SBS package of games.

Nine hedged their bets and bought the rights thinking that Australia would finally qualify and they would’ve had the aussie games in prime time. It didn’t work out and SBS gained the “B” package late in the piece.

Here’s an article on the SBS/ Nine broadcast of the 2002 WC.

SBS gears up for Cup

I can’t remember exactly how it panned out in the end but definitely remember the bulk of it appearing on SBS.

Also possible - worth also flagging that Nine were the lead Australian broadcaster for '02; Korea/Japan meant prime-time slots in Australia, only being 1-2 hours difference to AEST. Hence why the late SBS package of games.

From the live recording off Tasmania TV of the 1984 Grand Final.
HSV-7 list their relay stations. (This doesnt appear on the VHS or DVD release) 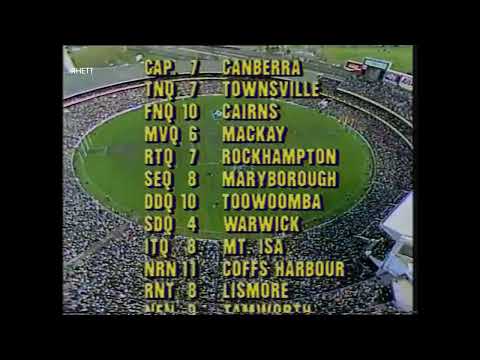