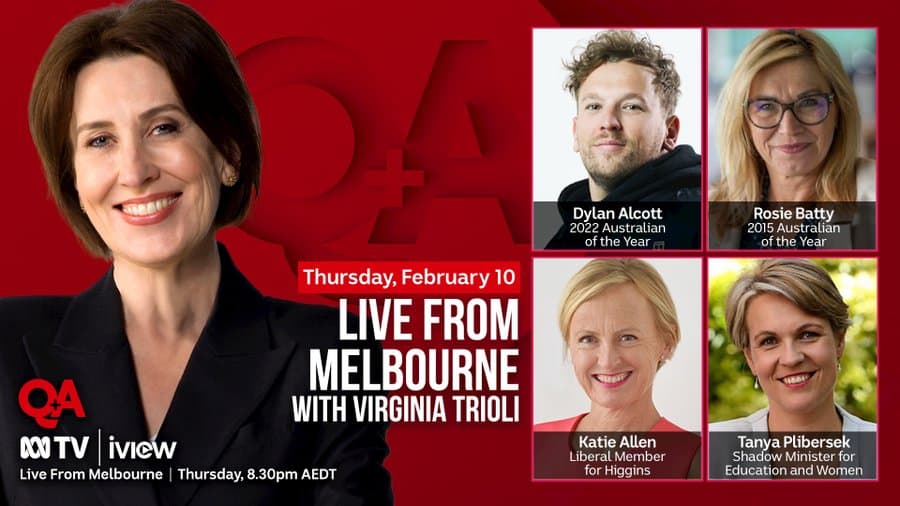 Coming up on Q+A’s season premiere, what makes a great leader? We bring together an influential panel, combining those who have had leadership thrust upon them with those who choose to take on positions of power.

We’ll examine the role of Australian of the Year and look at the expectations we place upon recipients.

We’ll get an insight into what it takes to strive for social change and ask whether we are doing enough to protect our most vulnerable – those in aged care, in remote Indigenous communities, people living with disability and women and children?

And with the parliamentary year kicking off this week, we’ll discuss the fallout from the release of unflattering text messages about the Prime Minister and threats from some moderate Liberals to cross the floor over the contentious religious discrimination bill. We’ll look at the tense state of affairs in Canberra and ask, how are our political leaders faring with an election imminent?

It’s shaping up to be a fascinating year and we want you to be part of the conversation.

The numbers are in. In 2021 episodes on politics had slightly more Coalition than ALP audience members.

This week on Q+A – Stan Grant hosts live from Sydney.

Australians are heading to the polls in a few short months and the unofficial election campaign is well and truly underway. A host of high-profile independent candidates are hoping to disrupt the electoral map by standing against senior sitting MPs across the country. Many are campaigning for more transparency over political donations, however questions are being asked about the funding behind the grassroots campaigns that aim to secure independents a coveted crossbench seat. Are we seeing democracy in action or just another tightly coordinated campaign?

Meanwhile, noisy anti-vaccine protestors have travelled from far afield to voice their anger outside Parliament House in Canberra. How will this disaffection play out at the ballot box? What’s influencing the vote of the broader electorate and are these voices being heard in the national conversation?

And overseas tensions in Ukraine are at breaking point as the world awaits Russia’s next move. Russian President Vladimir Putin has more than 100,000 troops massed near the Russia - Ukraine border, prompting countries including Australia to evacuate embassies ahead of an expected invasion. Are we at the end of the diplomatic road as the region teeters on the brink of war? What are the global security implications?

Political campaigns, international posturing and protests – we’ll cover this and more on Q+A. 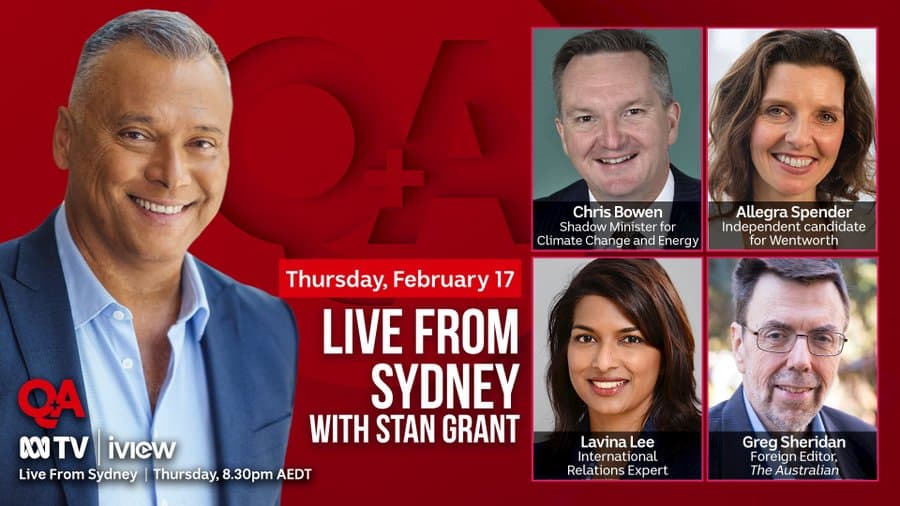 Liberal Member for Wentworth Dave Sharma has pulled out of his scheduled appearance on Q+A.

This week on Q+A – a special conversation around anxiety, mental health and living in the public eye.

The stress of the last few years has taken a toll on many people - how is it changing the way we speak about and support mental health? A quarter of Australians will experience an anxiety condition in their lifetime – but how many of us are prepared to speak openly about it? And how much harder is it to talk about when you’re a high-profile figure?

On Q+A this week, we’re bringing together a panel with personal experience, expertise and passion for sharing their stories. We’ll hear what it’s like to have to find the courage to speak out. We’ll talk about mental health and resilience in the sporting arena, in the corridors of power in Canberra and in the lives of everyday Australians.

We want to hear from you - what’s your experience with anxiety and mental health? We’ll look at the risk factors and how to manage it.

And, as always, we’ll keep a close eye on the news of the week. 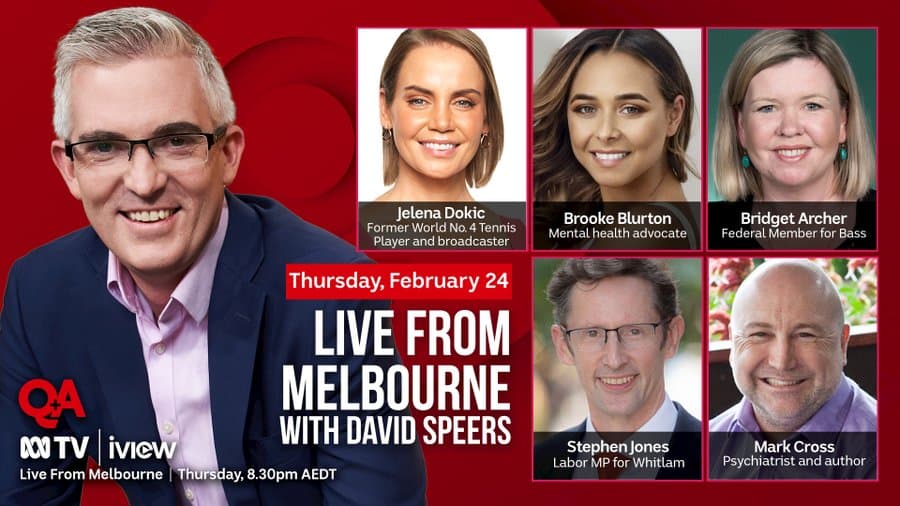 With a live performance by the legendary Archie Roach.

Archie Roach AM is one of Australia’s iconic storytellers and cultural figures. He’ll perform live to close the program.

Liberal Member for Wentworth Dave Sharma has pulled out of his scheduled appearance on Q+A.

According to Nick Tabakoff in The Australian, Sharma claimed the show’s producers shifted the goalposts on how the show would look. He said when he first agreed in early February to appear on Q+A, he was told the issues would be a mix of the Religious Discrimination Bill and overseas politics, together with the news of the day. But when a producer contacted Sharma last Monday (February 14) to confirm topics and guests, the producer told Sharma that the “broader theme” of the show would now be “disaffected voters, the election, independents and integrity”, and ACT Senate candidate and former Wallaby David Pocock had been added to the panel. Sharma told the producer “this now looks like a set up to me” and pulled the plug, before explaining his decision to Stan Grant later. Pocock eventually did not appear and Liberal candidate for Gilmore, Andrew Constance, was added to last Thursday’s panel alongside Bowen, Spender, Sheridan and Dr Lee.

Not sure why Q+A can’t take the Monday timeslot for at least part of the year if ABC are going to un current affairs there anyway. Swap the two programs.

What is the West willing to sacrifice for Ukraine?

The world is watching as Russian troops continue a full-scale invasion of Europe’s second largest country. Ukrainians have mobilised to defend their nation as Russian President Vladimir Putin places his nuclear forces on high alert. Waves of cyber-attacks and malicious disinformation campaigns have also hit Ukrainian networks and businesses. What are the broader consequences of war in eastern Europe?

Ukrainian President Volodymyr Zelensky says his people will fight for as long as it takes. Australia has joined a Western-led effort – funding weapons to Ukraine and implementing economic sanctions on Russia but won’t commit to troops on the ground. Why aren’t foreign forces being deployed and is this a moment of truth for the international community?

There’s been an outpouring of support for Ukraine from around the world, including large turnouts at anti-war protests within Russia. In Australia, thousands have rallied in support of Ukraine. How are Australia’s Ukrainian and Russian communities feeling as they watch the conflict from afar? 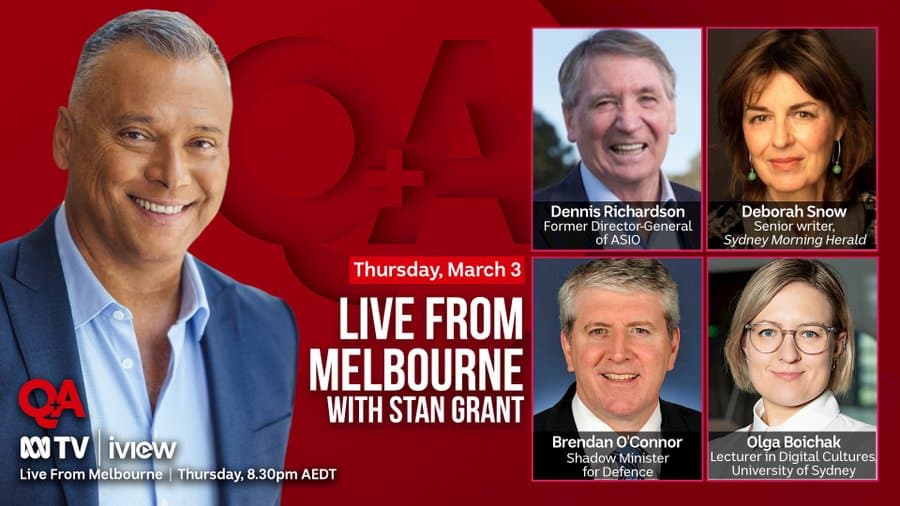 ABC host Stan Grant has ejected a Q&A audience member in a sensational blow up over the Ukraine conflict.

Not sure how I feel about the host kicking out an audience member for disagreeing with their opinion (for the record, I completely disagree with the audience member).

Actually that guy wasn’t voicing his opinion, he was pushing for the angle that Russia is justified and saying that it was necessary and it’s not exactly good influence. We don’t need that in this part of the world.

I just don’t like the idea of being kicked out for expressing an opinion. It shows that the ABC are biased and influencing people on how to think, even if 99.9% of the country (myself included) share the same POV as Stan that Russia invading Ukraine is not justified. It’s interesting too that he waited 20 minutes until after the question was asked to kick the guy out.

Did you watch it?

Didn’t watch it live but have caught up with all the relevant clips and quotes.

after watching the question in question he is pushing an angle that Russia is justified. he’s not a good influence . and I’m glad grant liked him out , your right we don’t need that in this part of the world

Except the guy’s opinions are unfounded and have no basis in fact. Posing a question that is undoubtedly biased towards the Kremlin and accusing the media of portraying Russia badly and saying that Ukraine has been bad towards the people in the Donbas region is misinformation and he should be shut off for promoting that.

A legitimate opinion in that area should be ‘Has the media fully considered Russia’s arguments and their history in their portrayal of Russia’ rather than ‘Ukraine has been a tyranny in Donbas region and that Putin is the saviour in the world and the media ought to be ashamed of portraying him as otherwise. He’s a Pro-Russian hack with no good intention other than to hijack Q&A with his unashamed misinformation. 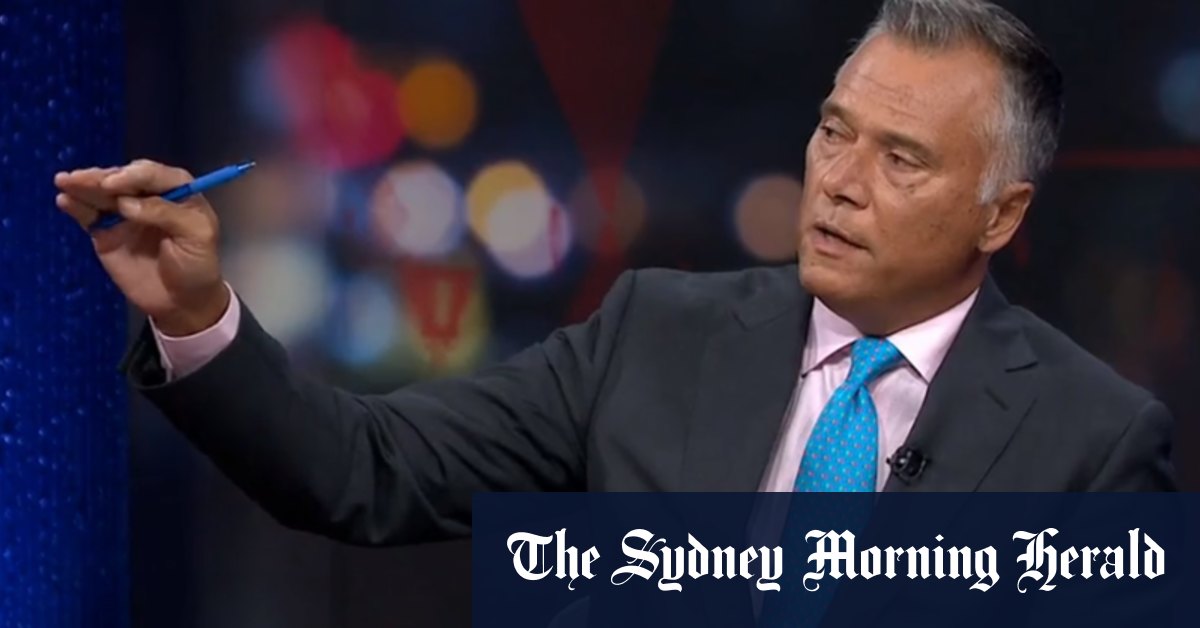 In an extraordinary move, the host of Q&A ordered a young pro-Russian man to leave after he spoke in support of Vladimir Putin’s invasion of Ukraine.

It seems to me that this question wasn’t vetted properly, and it should have been vetted.

Firstly, I can’t begin to imagine how you’re feeling at the moment not only seeing what’s unfolding in your home country but also worrying about the safety/status of your cousin and daughter. Think I can speak for everyone here when I say that I hope they’re safe and that you’re able to get in contact with them ASAP.

In regards to the quoted point, I think you’ve hit the nail on the head in regards to the major issue. Most of the pro-Russian person’s ‘question’ was really a comment/statement which shouldn’t have gotten past the vetting process in the form it was allowed to be delivered in on air (or at the very least, Stan Grant should have interjected when the person veered into delivering his statement). I agree with Tom that there was definitely a way the person could have asked a question that allowed the panel to address the pro-Russian perspective. However, the person didn’t want to ask such a question.

The other issue is how the ejection unfolded (ie; did Grant make a unilateral editorial decision or did the producers make the call) and why it happened 10 - 15 minutes after the person asked the question. Feel like such a decision had to have happened ‘in the moment’. Ejecting the person later on in the show not only drew more attention to what happened but it seems weird for Q&A to circle back to the moment - especially when it could have been prevented in the first place if the show’s producers wanted to.

Now Kick-IT, I deeply disagree with your post on a humanity and decency level.

KICK-IT hasn’t posted on this thread.

I was deeply upset by his questioning. (I’m Ukrainian)

Really? So are you Ukrainian or are you an Indigenous Australian?

Recognising the Aboriginal identity with that flag would be awesome for me.

If that does happen there is nothing wrong with that. I see nothing racist or discriminatory about that. And I am a black person for god’s sake. Again all hysteria from your favourite news source - ABC.

As a black person can I understand and empahise with a lot of what they are doing/saying.

Why did the ABC let the guy on in the first place would of they have known the Question.

Potentially - and I don’t know - could he have mislead them with what he was going to ask or how he’d go about it? You’d have to imagine that they wouldn’t allow that sort of comment, so there are certainly questions around how he was able to do so.