15 September 1977: ATV0 screens the National Survival Test, which aired on TEN10 Sydney a couple of months earlier. The special was aimed at making Australians more aware of some of the basic facts that will help them survive various dangers including accidents and disasters.

I think a program such as The National Survival Test will still be relevant today.

Sadly, the original footage of Bruce Gyngell’s famous announcement was not preserved.

Someone would have to have filmed it as they didn’t have tape machines then.

Someone would have to have filmed it as they didn’t have tape machines then.

Apparently a kinescope recording was taken of the opening spiel but it was lost or misplaced and that’s what led to the more polished re-enactment that was made a year or two later.

yeah but they were on 4 channels at once

I accept that, but the original post was about “the most watched event in Australia” rather than the highest TV rating.

I accept that, but the original post was about “the most watched event in Australia” rather than the highest TV rating.

i know, i was being a bit facetious

17 September 1988: Network Ten begins its coverage of the Games Of The XXIV Olympiad from Seoul, South Korea. With timezones similar to Australia, daily coverage went from 9am through to 2am, with a 2-hour break from 5.30-7.30pm (weeknights) and a half-hour (6-6.30pm) on weekends.

In Melbourne, the Opening Ceremony of the Olympic Games (on a Saturday morning) was not even Ten’s highest rating show that week. That honour went to The Comedy Company earlier in the week, which almost doubled the ratings of 60 Minutes and just edged ahead of the Olympics opening ceremony. Ten was already on track to win the week’s ratings in Melbourne even before the Games started on the Saturday.

It was a week where both Ten and Seven recorded increases in their news ratings at the expense of Nine’s A Current Affair.

19 September 1964: The VFL Grand Final is not able to be broadcast in Victoria so coverage of the game is restricted to evening replays. ATV0, however, as the new channel was keen to assert itself amongst its older rivals and ran two hours of previews and interviews ahead of the game, including a replay of the previous night’s Grand Final Eve edition of Sports Angle.

19 September 1986: The Nine Network celebrates 30 years of television with a two-hour special, Television — The First 30 Years, featuring footage from some of TV’s most popular and most remembered programs and personalities.

19 September 1991: The tabloid current affairs show Hard Copy debuts on Ten, hosted by Gordon Elliott in LA. The show borrowed extensively from the US original but there were a team of reporters in Australia including Richard Willis, Iain Gillespie, Jane Hansen and Meni Caroutas. The show ran in Australia for two years. 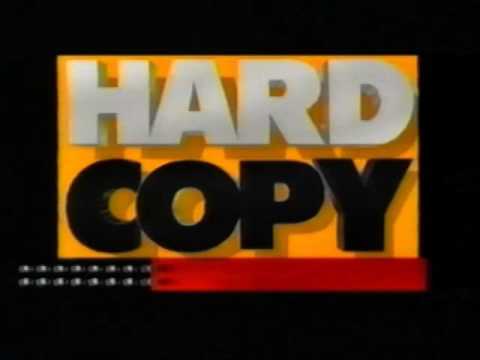