October 22, 2009 - a large seagull appears behind Peter Hitchener during a story.

A monumental day in the history of National Nine News.

20 October 1973: The Sydney Opera House is opened by Queen Elizabeth II. ABC was the host broadcaster of the official opening and its coverage was also simulcast through the commercial networks. The coverage was produced in colour but broadcast in Australia in black and white.

A news film of the opening would be colorised digitally 45 years later, as part of SBS documentary Australia in Colour.

One of the most memorable news broadcasts in this country

Many 90’s fans will remember Don Lane’s appearance on the last episode of The Late Show with the D-Gen.

And here’s the video. Also note a pregnant Livinia Nixon in the weather preview.

Network 10 in Adelaide, otherwise known as ADS 10, has marked its 60th anniversary with a special 10 News First report on how ADS has covered the events which have shaped the station and the state across that time.

The report features rare archival footage of the early days of television news-gathering in Adelaide, as well as interviews with staff members from across the decades. Some of them who are still with ADS, have been on the news front line in South Australia for more than half those 60 years.

From the Beatles visit in 1964 which attracted their biggest street crowd ever for the band, to the devastating Ash Wednesday bushfires in 1983 to the Adelaide Crows and Port Adelaide Power premierships – ADS 10 experienced the highs and lows of every major event with its community.

The biggest event for the station happened in 1987 when its call-sign switched from the Seven Network to Network 10 – a moment also covered in the 60th anniversary report. While national programs switched over, locally produced shows like its local news program remained, continuing its role in engaging and informing the community.

Network 10’s executive editor, Adelaide Fiona Clark (who has been with ADS 10 for more than two decades) said: “The faces may change, and the technology forever speeds up and improves, but our passion for reporting on what matters to the community in which we live is no different now than it was for our pioneering colleagues six decades ago. We’re proud of our ADS heritage, but we’re also energised about the decades still to come.”

Network 10’s general manager, Adelaide Frank Filosi (who was been with ADS 10 for almost 34 years, including during the call-sign switch) said: “We’re thrilled to be celebrating 60 years of informing, engaging, entertaining the people of South Australia. We’ve achieved so much together.

“I want to extend my heartfelt thanks to the South Australian community and sponsors for their unnerving and valuable support over the last 60 years. I also want to thank the Network 10 executive team for their continued belief and investment in what we do. And most importantly, I wanted to thank the staff of ADS 10, past and present, for their passion and hard work day in and day out to make the ADS 10 operation such a success.”

This flyer was an insert into various magazines during the week of 0/28’s debut. This particular copy came from The Australian Women’s Weekly’s TV magazine, but IIRC TV Week also carried it. 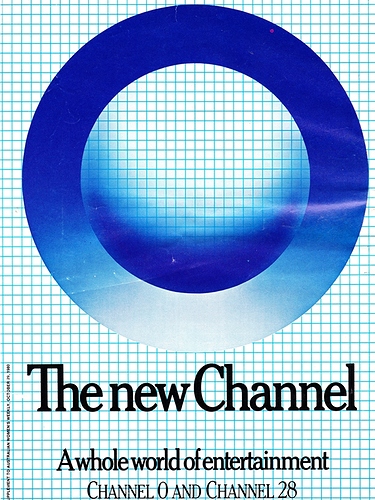 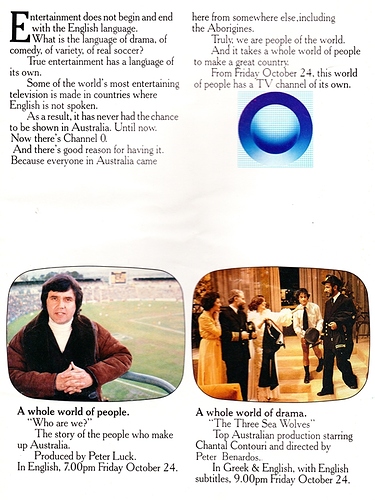 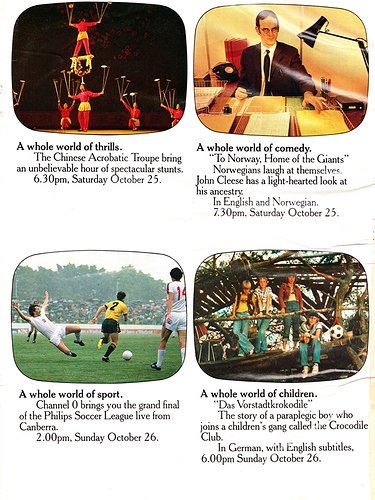 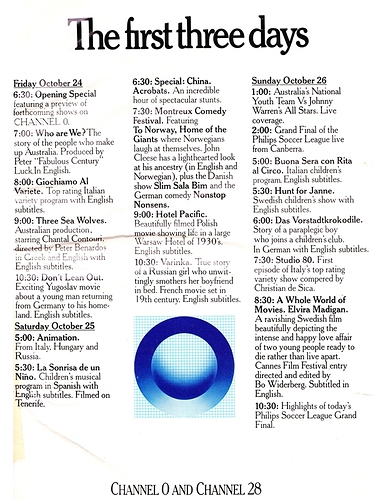 While the 0 frequency was nothing new to those in Melbourne, it was something completely new to those living in Sydney.

Front page of The Advertiser from Monday 26 October 1959, reporting on ADS7’s debut on Saturday night 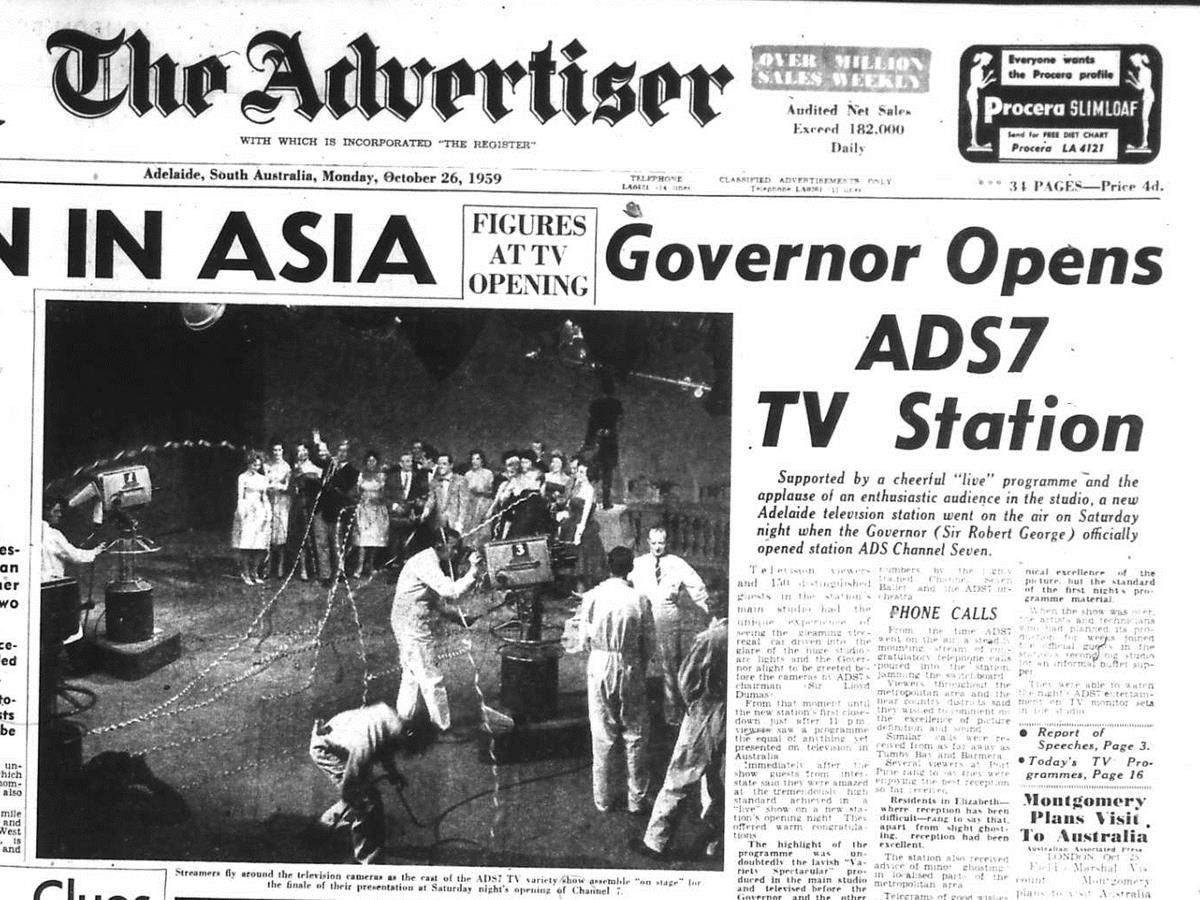 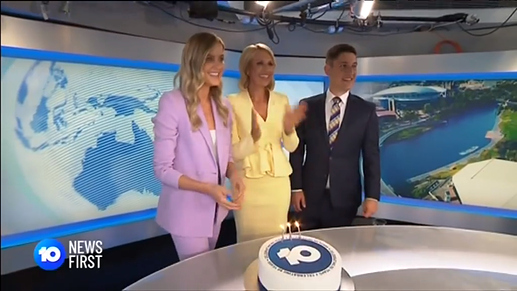 One of the quirks in Australia's television history is that the Ten Network celebrated its 50th anniversary just a few years ago. However, today, its Adelaide station -- ADS Ten -- turned 60. The anomaly has come about as ADS originally began as ADS7...

Great to see ADS10 celebrate 60 years. There seems to be some pride in the station over, which is good to see.

Twenty years ago today channel Nine and Somers-Carroll Productions release a statement announcing the end of Australia’s longest running variety show, Hey Hey It’s Saturday. Although the show was still winning its timeslot, production costs and a slip in viewership in the desirable viewers 16-39 demographic are blamed for the demise. The final show would air November 20, 1999.

After they lost Ossie, the show wasn’t the same.

27 October 1980: SBS 0/28 presents its first news bulletin, Worldwide News, read by George Donikian. The news is initially in the 9.30pm timeslot but from 2 March 1981 is shifted to 7.30pm, still to avoid competing with ABC and commercial bulletins.

Weren’t the ratings for HHIS down in Sydney back in '99?

The axing of Hey Hey its Saturday 20 years ago, marked the end of an era for Nine after 28 years. Correct me if i’m wrong but what were the ratings like for the show during the final 4 eps?

28 October 2011 - Channel 10 televised its final 6:30pm with George Negus bulletin after 10 months on air. This current affairs bulletin rated so poorly, beaten by Seven and Nine News. Also, The 7PM Project aired its final bulletin in its 7pm timeslot before moving to 6:30pm timeslot and renaming as The Project.