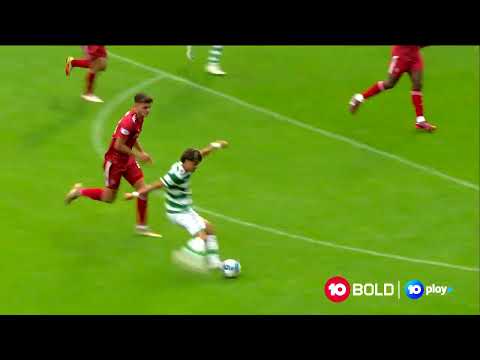 Football fans are in for a feast of international action this week as Scottish powerhouse Celtic FC and English Premier League side Everton FC head down under for the Sydney Super Cup, and the Emirates FA Cup actions continues.

Kicking off the international football action on Thursday, catch the Emirates FA Cup first round rescheduled match between Woking and Oxford United live from 6.35am AEDT exclusive to Paramount+.

Then Ange Postecoglou’s Celtic FC get their Sydney Super Cup campaign underway, when they take on local heroes Sydney FC, live from 7.00pm AEDT on 10 Bold, 10 Play and Paramount+.

On Sunday, catch a tantalizing match up for game two of Sydney Super Cup when Celtic FC take on Everton FC live from 2.00pm AEDT on 10, 10 Play and Paramount+.

The home of football will bring fans up to speed with Round Ball Rules available from Wednesday night exclusively on 10 Play, as our experts cover the hot topics in football previewing the Sydney Super Cup and the exciting A-League season ahead.

Then on Thursday night on 10 Play and Paramount+, and again on Saturday at 2.00pm AEDT on 10 Bold, episode six of A-Leagues All Access takes you behind-the-scenes with Western Sydney Wanderers recruit Miloš Ninković, in what promises to be a fascinating insight into his fall out with Sydney FC and the hotly contested Sydney Derby match on the weekend.

P+ should secure more leagues around the world to make it profitable. The K-League would get some eyeballs

It wouldn’t. Did it work for Optus?

Agree though they need as much as they can get.

P+ should secure more leagues around the world to make it profitable.

Optus currently has La Liga and J-League, while beIN has rights to leagues in Germany, Italy, France, Scotland plus EFL Championship of England, so P+ has its work cut out.

Also, P+ should only bid for rights for overseas leagues which are popular with Aussie soccer fans. 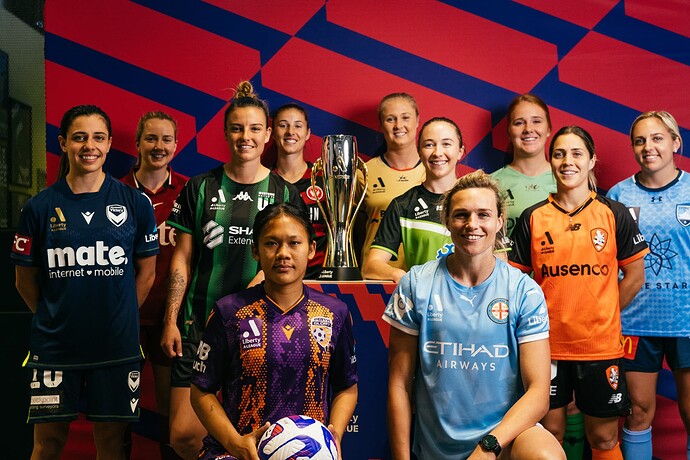 Live On 10 Play And Paramount+.

The 2022/23 Liberty A-League season gets underway this weekend with a brand new matchday show concept Dub Zone, and an expanded fixture for the exciting season ahead, providing fans more women’s football content than ever before.

In a historic first, this season will be produced by A-Leagues with all matches available live and free with no ad breaks in play streamed on 10 Play, and also available live on Paramount+.

It kicks off this Saturday, starting with Dub Zone live from 2.45pm AEDT on 10 Play and also streamed on the 10 Football and A-Leagues Facebook pages. Dub Zone is an A-Leagues produced new studio show that will allow fans to engage directly with the hosts of the program through social media discussion, as the panel focuses on a main feature match, while providing updates and discussing simultaneous games.

Then the on pitch action starts with a blockbuster triple-header as Canberra United take on Perth Glory, Brisbane Roar host Newcastle Jets, and expansion side Western United play their first ever Liberty A-League match when they take on reigning Champions Melbourne Victory, all live from 2.55pm AEDT on 10 Play and Paramount+.

This season sees the competition expanded to 11 teams and extended to 20 rounds, on the precipice of the most exciting period in the history of football with the FIFA Women’s World Cup on home soil next year.

The ground-breaking docu-series A-Leagues All Access, available Thursday nights on 10 Play and Paramount+, and on Saturdays at 2.00pm AEDT on 10 Bold, will now focus on stars of the Liberty A-League Women including Western United and Matildas star Chloe Logarzo, Melbourne City and Matildas legend Melissa Barbieri and Melbourne Victory’s Kayla Morrison.

It’s good that all of the A-League Women’s matches will be shown on 10 Play and Paramount+. However… with the break of the Men’s competition (due to the World Cup) from this weekend, it would have been nice to see a match from the opening round air on 10Bold to fill in the void, and to promote the Women’s Competition.

@TV.Cynic Note the first round matches listed above are in November and not October

Optus also has the DFB-Pokal (the cup competition in Germany for both the Men’s and Women’s as far as I’m aware).

Optus also has the DFB-Pokal (the cup competition in Germany for both the Men’s and Women’s as far as I’m aware).

Yes. Bein sports did have this then Optus picked it up.

But beIN still has the local rights to Bundesliga. That’s the one that P+ should target for.

Stan and Paramount might be looking at the Serie A rights, when they come up. They would be a good addition to Stan’s champions league coverage or Paramount’s FA cup/ A-league coverage. 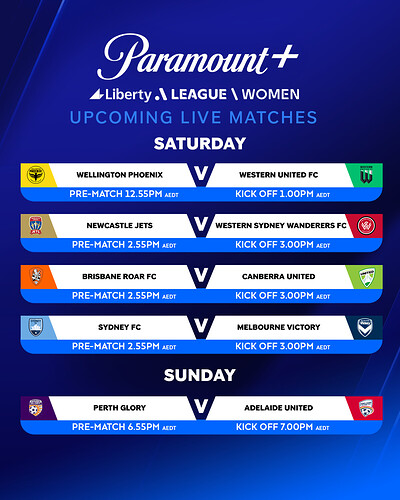 Live And Exclusive On 10 Play And Paramount+.

Round two for both Liberty A-League and Emirates FA Cup is underway this weekend with a grand final re-match highlighting the live football action across 10 Play and Paramount+.

After a win in their first ever Liberty A-League match, Western United will travel across the Tasman to face Wellington Phoenix this Saturday, live from 12.55pm AEDT on 10 Play and Paramount+.

Then catch Dub Zone as the team brings you all the match day excitement live from 2.45pm AEDT on 10 Play, and 10 Football and A-Leagues Facebook pages.

On Sunday, Perth Glory take on Adelaide United live from 6.55pm AEDT on 10 Play and Paramount+ as both teams hunt for their first win of the season.

The Emirates FA Cup Round 2 action is underway with eight matches live across the weekend, and full replays available exclusive to Paramount+. Who will make it to Round 3 where the competition heats up as Championship and Premier League sides enter the oldest national football competition in the world?

On Thursday night on 10 Play and Paramount+, and again on Saturday at 2.00pm AEDT on 10 Bold, episode seven of A-Leagues All Access takes you behind-the-scenes with CommBank Matildas star and Western United recruit Chloe Logarzo, highlighted by the expansion clubs first match and first win on the weekend.

It’s about the spectacle and the once in 4 years nature of the event. It’s similar to why people will watch running, javelin, long jump, gymnastics, judo, fencing, weight lifting etc when the Olympics are on but are not interested at other times.

Live And Exclusive On 10 Play And Paramount+. 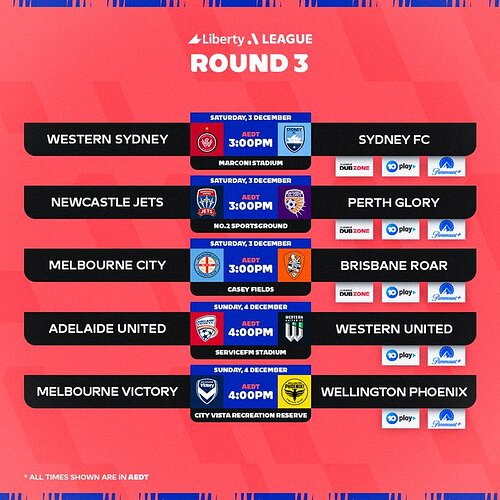 The Sydney Derby highlights the football action this weekend with round three for the Liberty A-League live across 10 Play and Paramount+.

Dub Zone kicks off the Liberty A-League action on Saturday, as the team brings viewers all the previews and excitement ahead of a massive match day, live on 10 Play, and 10 Football and A-Leagues Facebook pages.

Then the on-pitch action gets underway with the Sydney Derby as fierce rivals Western Sydney Wanderers battle Sydney FC live from 2.55pm AEDT on 10 Play and Paramount+.

On Sunday, it’s a top-of-the-table clash between Adelaide United and Western United, and Melbourne Victory host Wellington Phoenix, both matches live from 3.55pm AEDT on 10 Play and Paramount+.

Thursday night on 10 Play and Paramount+, and again on Saturday at 2.00pm AEDT on 10 Bold, episode eight of A-Leagues All Access takes you behind-the-scenes with Melbourne Victory’s Kayla Morrison. 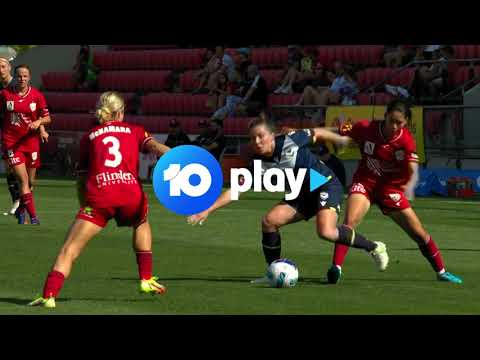 Western United FC’s 2021/22 journey is one unlike anything else, with a vision to create an A-League club from the ground up, and build a community in Melbourne’s fastest growth corridor – the Wild West.

The stakes can’t get higher, with a commitment to constructing a $100million stadium, training, and residential precinct. Go big or go home!

With no home ground, haemorrhaging millions of dollars, a streak of losses and sacking of the inaugural coach, it’s one kick forward, two kicks back. The club goes into crisis management, when in comes Socceroos legend, John Aloisi – a new coach with a mission to unite the team and get them to the top of the table.

With a belief in himself and his playing group, Aloisi instils a united mindset. Following multiple setbacks for the new kids on the block, broken pieces begin to mend and the group believes they have what it takes to win.

A Sunjive production, directed by Dan Jones, and featuring fan favourite players, Captain Alessandro Diamanti, Lachlan Wales and Josh Risdon, United is a series with an access-all-areas pass into the inner workings of a newly formed football club.

Get ready to ride an emotional rollercoaster, on and off the pitch, to watch the club navigate adversity and above all else, stay united.

United – Only On 10 Play From Wednesday, December 7. Plus, Live Liberty A-League Football This Week. Live On 10 Play And Paramount+. 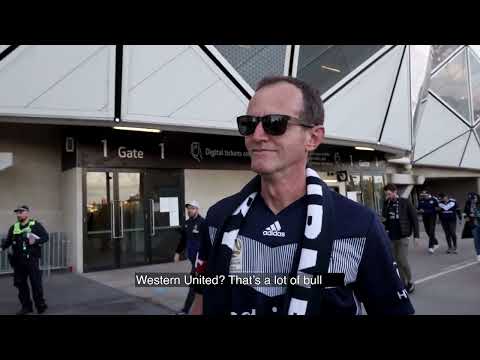