But then without the correct processing the 48 kbps can sound bad. Smooth FM sounds much better than Sonshine, and I don’t think that is due to the different EEPs. Heck Coles Radio sounds better and that is at 32 kbps.

I don’t know the Perth situation - but community stations seem to love wasting bits on slideshows and data, while most commercial stations have minimised those.

For example, Smooth Relax only has 0.4kbps of data, including doing text and slideshows, albeit slow to update, while Light89.9 (basically Sonshine) has 10-12kbps of data, though I can’t decode a slideshow on it. So both nominally 40kbps stations, but nearly 11kbps different in audio.

Getting Canberra DAB up near Newcastle this morning!

Barely hitting 1 bar out of 5 though. 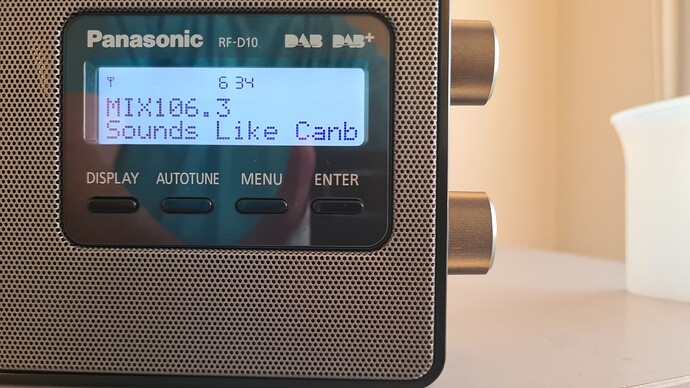 Great catch are you using an outdoor antenna?

No, just the telescopic antenna and it’s indoors too, but next to the window.

Yes, tropo was intense this morning between Canberra and Newcastle. Rhema 99.7 was the full three bars with solid RDS. Not a sign of 2HD 90.5 though which is what I was trying for. Taree (Middle Brother) also at full strength but nothing from Max or 2RE (2BRW could be overcome aiming north here). Nothing from Mt. Moombil either; I now only have 92.3 and 99.5 as clear channels.

Cabramurra was above 20C around 0600 this morning and it was just below 20C here, so there was a strong inversion. Humidity is disgusting here and worse on the coast; the hottest night of the summer by far.

Good grief that is what happened to 657AM when it previously had Niche Radio, it has been taken over by SEN? That station is quite weak south of the river. Maybe that is why people (Cockburn Central and beyond) should tune in to SEN Peel from Mandurah DAB+ (which I assume has a similar feed)?

The AM stations that Niche (previously Rete Italia) owned were pretty much all sold off (bar their 88FM LPONs in Victoria, pretty much) for SEN Track to start that network, yeah… Niche moving to DAB and well up the extended band (their site quotes 1692 for Perth now).

The Peel DAB feed is pretty much the “SEN WA” app/regional 16xx AM feed which doesn’t have all the racing 657 has.

The Super Radio Network changed their DAB STL over to a new Telstra Fibre connection on Tuesday & since then, their stations seem to be dropping out randomly but regularly, but it doesn’t sound like they’re dropping out, more the audio getting crushed to a low volume.
Fun is about the only DAB station I listen to & it’s giving me the shits, I’ll have to chase them up to fix, wonder how long that will take? At least I have a technical contact at 2SM now.

At least I have a technical contact at 2SM now

The rot set in years ago when the old ABA no longer required licencees to nominate a technical contact for each station in their licence renewal. You also had to specify their technical qualifications. Once that happened it became possible to run a station without any techs. SRN DAB+ has obviously been having problems for a long time, hope it finally gets sorted.

The Super Radio Network changed their DAB STL over to a new Telstra Fibre connection on Tuesday & since then, their stations seem to be dropping out randomly but regularly

Surprisingly 2SM jumped on this as soon as I told them about it, they’re going to change back to the old link until Telstra sort out the new link.

Well done on getting it fixed.

Thought I might have to wait weeks or longer to get a response out of 2SM but was surprised.

All depends who your talking to at SM
Is it James or Allan?

Yeah that’s why things will be happening

According to the ACMA FYSO 2022-27: 6 month progress report released last week, there were no requests being made by broadcasters to roll out further digital radio services in regional markets for this year.

I guess not surprising when no one knows whether DRM or DAB will be the preferred option for regional Australia. No one will be willing the invest into the format specific infrastructure until such a decision is made.

They very transparently just want handouts to pay for digital transition that would make no sense.

West Coast Radio showed that if there’s the will on account of the license holders in a market, they can make DAB+ happen in a timely fashion.

There’s plenty of moderate sized markets where they could start the process if there was any desire, and given no one is asking for it, there’s enough spectrum to go around.

I presume there’d only be handouts if transition to digital and analogue shutoff was likely to be a thing (like with TV). Given ACMA is busy transitioning AM stations to FM, I’m guessing they see a bit of life left in analogue radio yet (at higher frequencies at least), so forced transition is probably still decades away (if it happens at all).

I don’t think there’ll ever be a forced transition off FM. There’s just not the same benefit as there was with TV as the frequency range is small and not as useful for telecommunications.

Does anyone know how to find out the true costs of either renting or purchasing DAB+ spectrum. From a discussion on here long ago, I was under the impression that it was about $800 a week (about $45,000) a year for renting 64k (two lots of 32k). This is for the Sydney region. discussing this with someone yesterday, they said it has become much more.