Diary of an Uber Driver

Diary of an Uber Driver 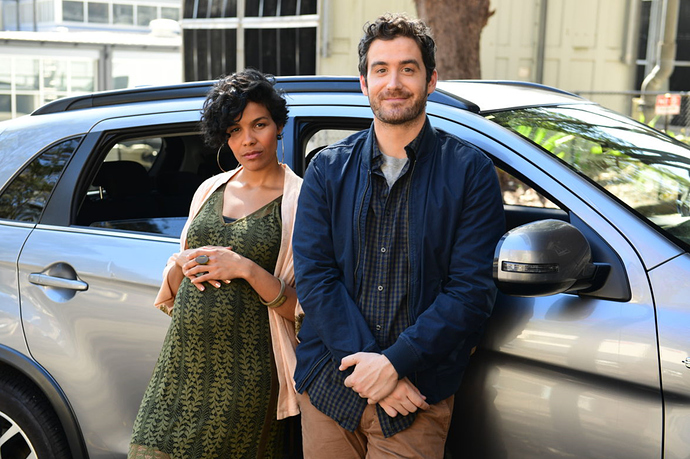 ABC, RevLover Films, all3media international and Create NSW are pleased to announce that filming is underway in Sydney on the six-part drama series Diary of an Uber Driver .

Written by Thomas Ward ( Please Like Me ) and based on the popular blog and bestselling e-book by Ben Phillips, the show is a series of love letters to the hearts and minds of those who make a city pulse.

The half-hour narrative drama follows Uber driver Ben as he tries to figure out what he should be doing while helping others get where they’re going. Against the ticking clock of impending fatherhood Ben must decipher what being ‘relevant’ looks like in a relationship that seems to think he’s surplus to requirements. Lucky for him, Ben has a revolving car door of human behaviour to trawl through for clues.

The series will be shot by Fast and the Furious franchise DOP Stephen F. Windon and produced by Martha Coleman and Lauren Edwards for RevLover Films.

ABC’s Head of Drama, Comedy and Indigenous, Sally Riley , says, “We’re delighted to commission such a distinctive and inclusive half hour drama series from breakout producer RevLover. Where else but on the ABC can audiences find such a loving portrait of urban Australia that is both deeply funny and full of heart?”

“We started RevLover to make the kinds of shows we want to watch, and we’re thrilled that Diary of an Uber Driver is our first production” said producer and partner at RevLover Films, Martha Coleman . “Audiences will fall in love with the honest, funny, nuanced writing of Tom Ward, inspired by the warm, observational blog by Ben Phillips and brought to life by a sensational cast and crew helmed by Matthew Moore. Thanks to all3media international, ABC and Create NSW who have been fantastically supportive in bringing this special show to life.”

Said Maartje Horchner , EVP Content at all3media international, “We are delighted to be working for the first time with RevLover – we started the conversation with them a few years ago when Diary of an Uber Driver was an idea, inspired by the Ben Phillips’ blog, presented to us by Martha and her team. It’s been a joy working with them to bring this show to production. The series offers a smart, humorous, contemporary view of life – and to have Matthew Moore and Stephen F. Windon aboard as director and DOP endorses RevLover’s credentials in the drama arena.”

Create NSW Acting Director Screen Investment, Engagement and Attraction Sally Regan said, “We’re very excited to support RevLover Films on their first scripted production. Diary of an Uber Driver is a timely, well-crafted contemporary drama series with a great deal of humour and warmth, and a wonderful opportunity to generate opportunities for production in NSW.”

Filming will take place in and around Sydney over the next five weeks. Diary of an Uber Driver will screen on ABC in 2019.

Would have been very entertaining if this was shot around the time when the Stefanovic brothers were bitching about their colleague:)

Love this idea. New and different.

Second that. Great idea for a drama/comedy series. ABC again coming up with the goods!

Queue the usual complainants about the use of the “Uber” brand name on an ABC production.
I suppose Diary of a Rideshare Driver didn’t sound quite as appealing. 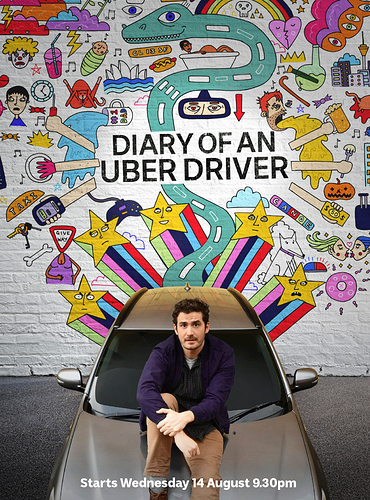 Ben (Sam Cotton) is trying to figure out what he should be doing while helping others get to where they’re going.

He spends his day ferrying city-siders from A to B, catching glimpses into their lives before the ride is over. Some are friendly, even flirty, while others let Ben into the intimate parts of their lives whether he likes it or not. Many don’t acknowledge his existence as they go about their day.

Ben’s trying to negotiate his relationship with Beck (Zahra Newman), which is the very definition of “it’s complicated.” Fiercely independent, Beck is pregnant with Ben’s child and, against the ticking clock of impending fatherhood, he must decipher what being relevant looks like in a relationship that seems to think he’s surplus to requirements.

Lucky for Ben, he has a revolving car door of human behaviour to trawl through for clues on how to navigate his newfound responsibilities.

Ben tries to fit into Beck’s life, but can’t seem to find a way in. Beck’s best friend Josie (Nicole Shostak) keeps him on his toes and enjoys putting Ben to the test. Meanwhile, Beck’s teenage step-brother Clint (Ed Oxenbould) takes advantage of Ben’s friendly demeanour and desire to please.

Senior citizen Ken (John Bell) might seem like he’s all but given up, but when he lets Ben into his life, he teaches the young Uber driver that experiencing pain in a life filled with love is far better than a life lived alone.

Julie (Genevieve Hegney) has just received some bad news and needs to get away from it all so Ben shifts gear to provide her with a distraction from reality.

Georgie (Emily Barclay) has been dumped by her girlfriend and isn’t ready for closure when Ben turns up on her doorstep to deliver his latest passenger, Byron, the dog the couple once shared.

Jim (Keith Robinson) and Terry (James Lugton) show Ben what true friendship is all about, while Mal (Kevin Macisaac) gives Ben a little insight into the tricks and trials of being a father when his daughter Olive (Phoebe Barnett) tells a little white lie to impress her friends.

Driving around these colourful characters isn’t always easy and Ben also faces the constant wrath of the taxi industry. While Ben thinks that everything’s fair game in the free economy, things are a little more complex to taxi driver Saad (Rajan Velu).

When Halloween rolls around, Ben faces the biggest night of his life. Obnoxious Bryan (Simon Corfield) and precocious teenagers Erin (Heleina Zara Hetherington), Amy (Gemma Chu-Tran) and Charlotte (Annabel Wolfe) take him for a ride, but nothing can prepare Ben for what comes next. 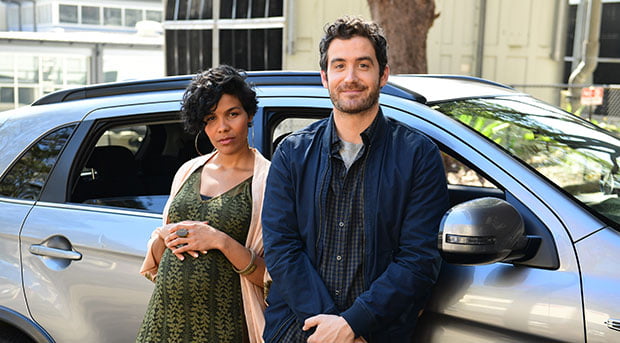