How long have we been asking for a ring of steel (or something similar) around Sydney?

I would like Bungendore to be annexed by the ACT. Permanently would be OK, too.

Queensland Premier Annastacia Palaszczuk said this morning that she was very concerned with COVID situation in northern NSW, after regional towns like Byron Bay and Walgett went into lockdown in recent days. Palaszczuk said she would be monitoring the situation very closely over the next 24 hours, and again urged Queenslanders who live near the state’s southern border not to cross into NSW. She added that she would talk to mayors along the border communities about increasing the vaccinations.

345 new cases of community transmission.
At least 60 of those infectious in the community.
Two deaths - both men in their 90s.

One man acquired his infection as part of the Liverpool Hospital outbreak and died in the hospital, he had one dose of AZ. The other was a resident at Wyoming Residential Aged Care Facility in Summer Hill and passed away at Royal North Shore Hospital. He had both doses of Pfizer vaccine.

NSW Government declared this morning that Bayside, Burwood and Strathfield council areas as “areas of concern”, and they would be subjected to extra COVID-19 lockdown restrictions from 5pm today, joining eight other local government areas in Sydney’s west and south west plus 12 suburbs in City of Penrith.

@NSWHealth
NSW recorded 345 new locally acquired cases of COVID-19 in the 24 hours to 8pm last night. Of these locally acquired cases, 128 are linked to a known case or cluster – 101 household contacts & 27 close contacts – & the source of infection for 217 cases is under investigation. https://t.co/aphtK5nZfO 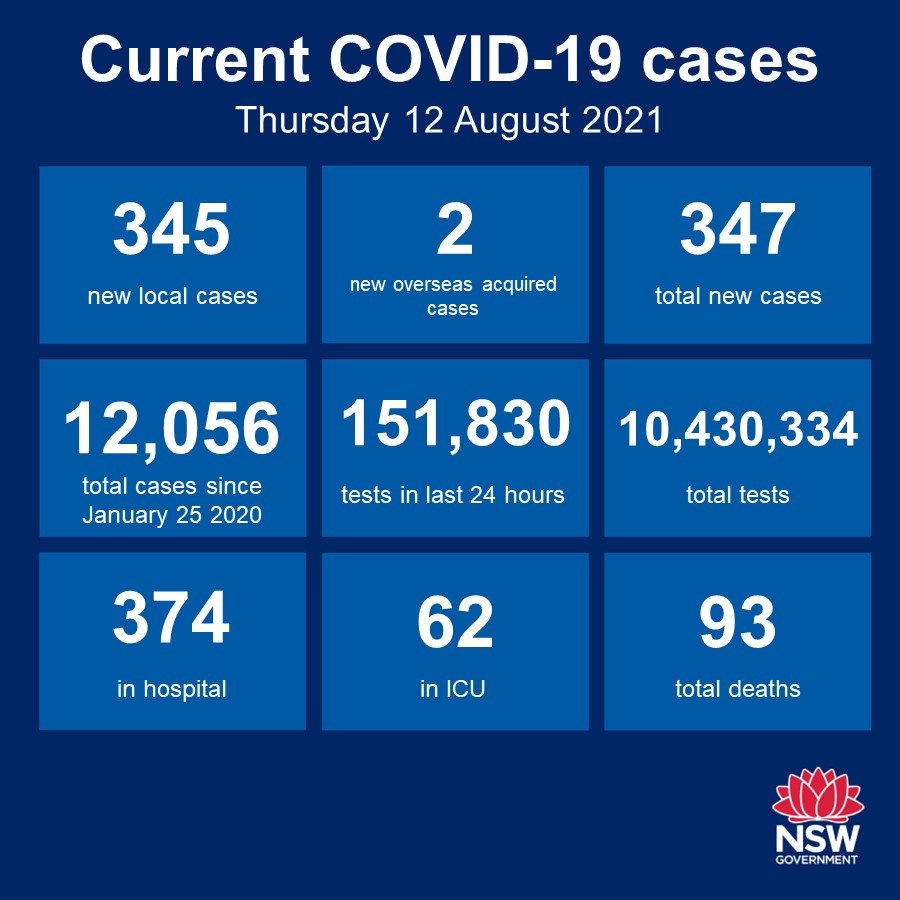 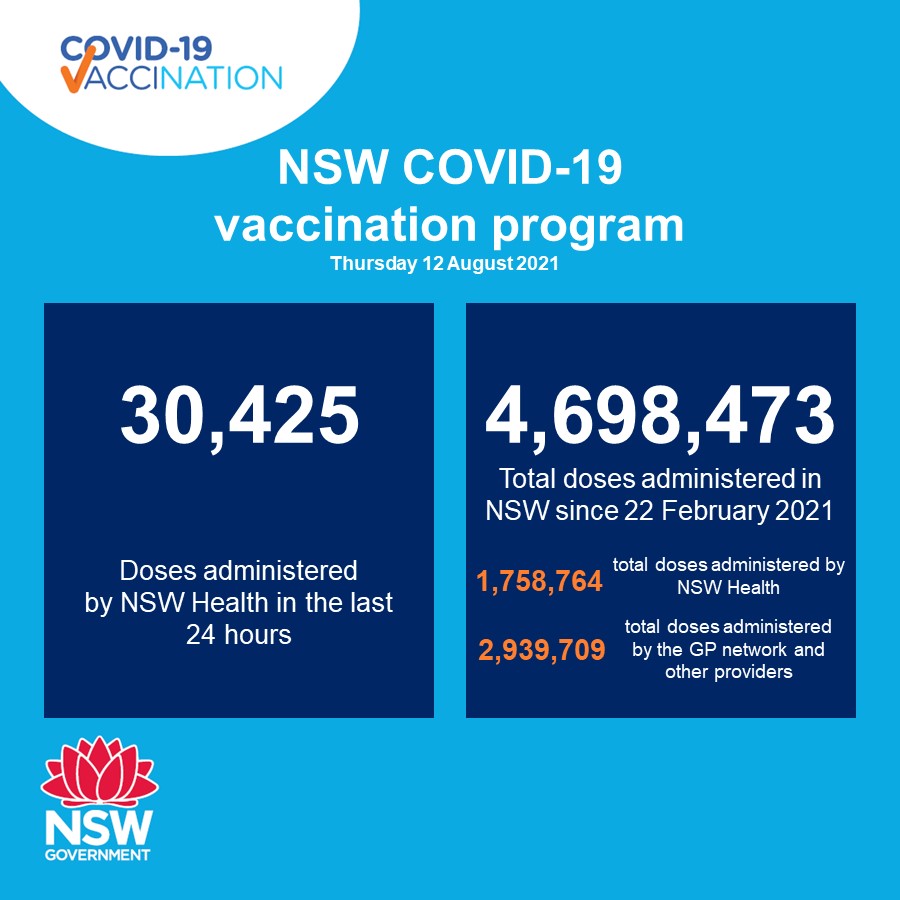 @NSWHealth
There are currently 374 COVID-19 cases admitted to hospital, with 62 people in intensive care, 29 of whom require ventilation. There was a record 151,830 COVID-19 tests reported to 8pm last night, compared with the previous day’s total of 119,256.

120 of reported cases were from south west Sydney, 85 from western Sydney, 24 from Hunter New England and two from western NSW which were reported yesterday.

There were three additional cases in Dubbo overnight and one in western NSW, bringing the total number of cases in the area to six. The new cases include a student from Orana Heights Public School.

NSW Health has recommended that the lockdown in the nine council areas in Hunter Valley by one week to 12.01am on August 20, due to new cases in the area. Half of the 24 cases are linked to RFBI Hawkins Masonic Retirement Village in Edgeworth, including eleven residents and one staff member. The remaining 12 cases today are linked to previously reported cases.

Gladys said there had been no new cases in Tamworth, Armidale and Northern Rivers regions.

Watch the ani-vaxers pounce on the news a fully vaccinated man died of Covid.

Not even an option and won’t be happening.

They should say when he got his second shot. If it was only recently then that makes a world of difference.

And other health conditions could also explain it.

The ACT Government has declared the whole of NSW a COVID-19 affected area, and only those from ten approved postcodes in that state will be permitted to enter the ACT, and for essential reasons only. NSW residents will be expected to provide proof of residential address and the reason their reason for travelling to the ACT. The ten approved postcodes include Yass, Murrumbateman (both 2582), Queanbeyan (2620) and Bungendore (2621).

Dying from COVID with both doses is apparently a 1 in 2 million chance.

@NSWHealth
If you live in Greater Sydney, do not travel outside this area for your COVID vaccine. There are hundreds of GPs, pharmacies & NSW Health vax clinics across Greater Sydney: nsw.gov.au/covid-19/healt… https://t.co/TzCF16rCof 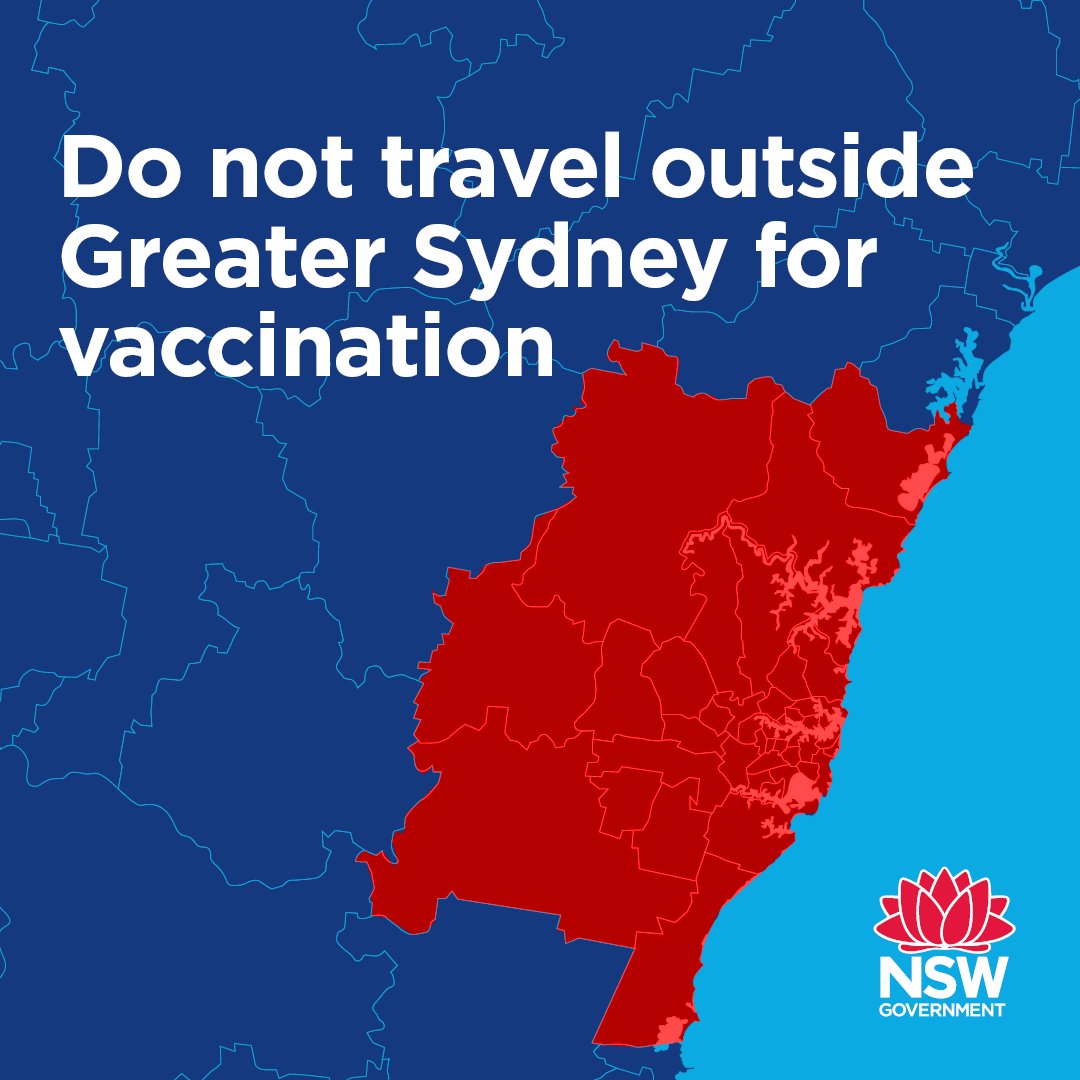 Anyway, for those interested I had my first shot of Pfizer today. So far, so good. Next one on September 9.

Does Sydney need a Jerome Weimar to front these pressers? Perhaps if they had someone up there going into much detail around the who/why/how some of these chains of transmission could be reduced.

Politicians are not exactly the most reassuring people and day after day as I watch Gladys and her ministers continue to fumble and provide workshopped answers it really just frustrates everyone more. Sure they might not have every last detail but get someone who does!

Give someone else the podium. Someone will half an idea. These pressers are getting worse and worse.

Never thought I’d say this but it’s quite refreshing switching over to the Andrews presser after watching this car crash.

Anyway, for those interested I had my first shot of Pfizer today. So far, so good. Next one on September 9.