just wondering where you get the logos from?? @WAtvVideos

Hey @WAtvVideos, just noticed a bug. If I select Foxtel it gives me this:

Thanks. Should be fixed now.

Thanks, that one is meant to be hidden until when/if they launch it.

just wondering where you get the logos from?? @WAtvVideos

A mix of Google, MS, official sites or just making them from scratch.

Nice work. Just 2 issue with it:
• Not compatible on mobile
• Lack of colour

I think there’s an error in the data source? The 5:30 program would actually be Nine News Local.

I think there’s an error in the data source? The 5:30 program would actually be Nine News Local.

they didn’t say it was perfect. 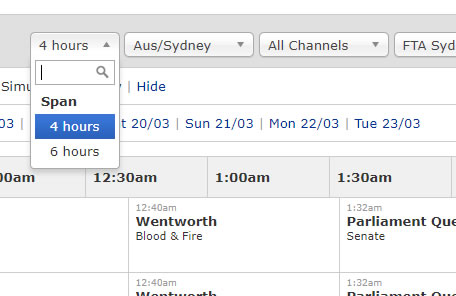 Guide has been refreshed to integrate it with the channel list. Both list and guide are now in sync!

I’ve made a custom bouquet that compares each state’s 7 and 7mate so you can see which AFL match is being broadcast where. Also added Fox Footy and Fox Sports 503 for reference.

You can switch the sorting to Groups to sort by ‘channel then state’ instead of the default ‘state then channel’.

When I was in Mollymook in January 2020, they were still using those LCN names, so I’d imagine a rescan wouldn’t have made any difference to those LCNs.

Given the affiliation change in just 5 (!) weeks, it’s absolutely certain that WIN won’t be going to the trouble of updating them to their correct LCN names at this point.

The thread resurrection reminds me - any chance of fixing the invalid certificate?

Lol, looks like I forgot to unpause it on Cloudflare. Have resumed, should propagate through dns soon.

How do you make the TV guide?

I’ve got a server that scrapes various TV guide web sites every day. It puts all the data into an SQL table on a remote server. XMLEPG and Sattvguide reads from the database and displays the guides as a grid. I also generate daily XML files for use in media centres and TV apps.

how to integrate into kodi